After Series of Crashes, Navy to Pause Flight Operations for Safety Reviews 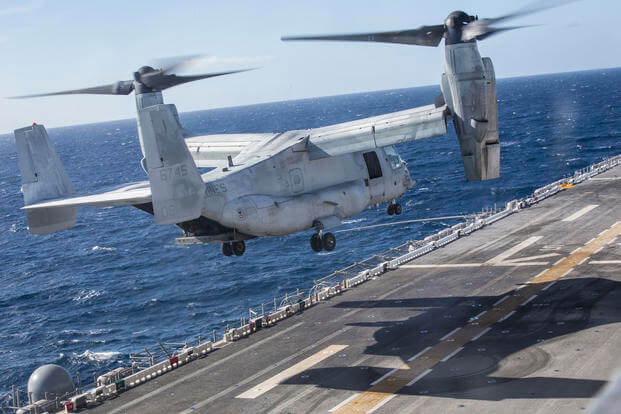 The U.S. Navy announced Saturday it would pause all flight operations to conduct safety reviews and training after three recent crashes, including one this week in Imperial County that killed five U.S. Marines.

Vice Adm. Kenneth Whitesell, Naval Air Forces commander, has directed more than 300 naval aviation units that are not deployed in the United States or overseas to take a one-day pause June 13 to review their safety procedures and practices.

Deployed units will conduct the review “at the earliest possible opportunity,” the Navy announced.

“In order to maintain the readiness of our force, we must ensure the safety of our people remains one of our top priorities,” Cmdr. Zachary Harrell said. “We understand the most valuable resource we have is our people, and we just want to be sure that we’re making our best efforts to keep them safe as we train and operate.”

The safety pause does not apply to the U.S. Marine Corps.

The order comes after three crashes occurred this month involving U.S. Navy and Marine Corps aircraft. The cause of the accidents are under investigation.

On June 3, a Navy pilot, Lt. Richard Bullock, was killed when when his F/A-18E Super Hornet jet crashed in the desert, in the general area of Trona in San Bernardino County, during a training mission.

On Wednesday, another crash killed all five U.S. Marines aboard a MV-22B Osprey during a training mission near Glamis in Imperial County, about 150 miles east of San Diego near the borders with Arizona and Mexico. The aircraft was based at Marine Corps Air Station Camp Pendleton with Marine Aircraft Group 39 and crashed around 12:25 p.m. near Coachella Canal Road and Highway 78.

Thursday, a Navy helicopter with four crew members went down near El Centro during a training flight. One person sustained non life-threatening injuries and has been released from the hospital, Harrell said in an interview.

The incidents follow several other crashes nationwide that have resurrected concerns about military aviation safety — including from members of Congress — that go back several years.

On Monday, two aviators were injured when an AH-64 Apache helicopter crashed near an Army base in southern Alabama, officials said. In March, a Marine MV-22B Osprey crashed in Norway and killed four.

Spurred by these crashes, Congress may tighten requirements on the military’s aviation safety reporting, according to Defense One, a military news site.

© Copyright 2022 The Los Angeles Times. All rights reserved. This material may not be published, broadcast, rewritten or redistributed.