Can a Team of Spec Ops Veterans Teach a Group of Celebrities How to Operate? 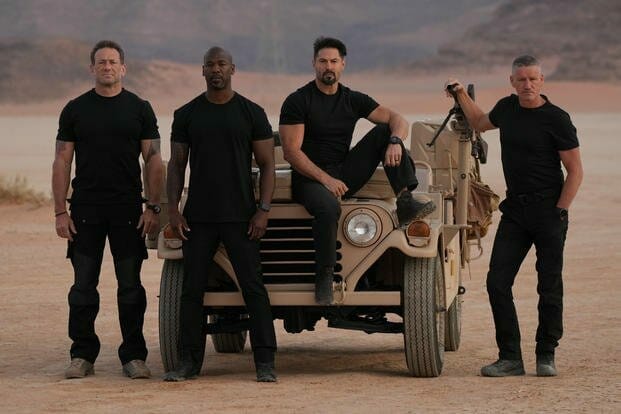 What’s a special operations veteran to do when it’s time to hang it up and make a return to civilian life? Their particular set of skills is not usually in high demand back home. Verizon, Walmart and General Motors don’t really have a career path for retired door-kickers.

Why would our four veterans agree to work with this motley crew? They’ve got some experience. In addition to their military service, all four men are veterans of the popular UK Channel 4 series “SAS: Who Dares Wins,” a show that’s already done four rounds of celebrity spec ops training for British television.

Reyes is best known for playing himself in the HBO Iraq War series “Generation Kill.” He acted in the excellent military thriller “Semper Fi” in 2019, founded the Force Blue organization that recruits veterans to coral reef conservation and became a bit of a UK tabloid celeb after appearing on the “SAS: Who Dares Wins.”

Adeleke recently appeared in “The Terminal List,” the Prime Video series based on the novel by Navy SEAL veteran Jack Carr, and will star in the upcoming action thriller “The Plane,” made by Gerard Butler’s production company G-Base. Butler is so excited to work with Adeleke again that G-Base will now produce “Unexpected Redemption,” a human-trafficking/organ harvesting drama that will be the former SEAL’s debut as a movie director.

Honestly, it’s hard to imagine most of this group lasting more than a couple of minutes in a true Hell Week-style evaluation, but a few of the athletes (Lloyd, Kenworthy, Liukin, Amendola, Howard) may still have enough left in the tank to make a reasonably good showing.

If you’re curious about how all this might work, YouTube has a few clips from the celebrity versions of the UK series “SAS: Who Dares Wins,” but go in with the understanding that the idea of who qualifies as “celebrity” in London is very different from what we count as famous here in the USA. Jeremy Irvine, who once starred in Steven Spielberg’s World War I drama “War Horse,” is the only face you might recognize unless you’re a huge fan of professional soccer or UK reality television.

Of course, it’s always great to see a company like Fox doing its part to promote veteran employment. Here’s hoping Reyes and Adeleke have a great time on the show, and none of the contestants embarrass themselves too much.