Holes in Hull Have Tormented USS The Sullivans for Years 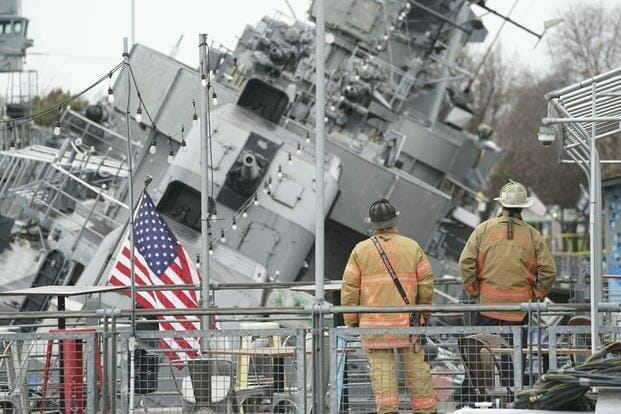 John Branning spent 16 years helping to maintain the USS The Sullivans, painstakingly patching holes in the hull underwater every summer, as well as taking care of the other ships at the Buffalo and Erie County Naval & Military Park.

He retired as superintendent of ships in September, and when he saw photos of the destroyer listing heavily to starboard Wednesday night, he was heartbroken. He knew there was a catastrophic breach in the ship.

Diesel pumps worked throughout Thursday night and reached a point of “equilibrium,” in that they are pumping out as much water as is leaking into the vessel, said Paul Marzello, president and CEO of the park.

At one point Thursday afternoon, the Coast Guard estimated the ship had more than 3 million gallons of water inside.

On Friday, crews from an industrial diving company were attempting to get to areas of the ship that remain full of water and then seal up the areas once the water is removed, Marzello said. But they were cautious about what spaces they go into because they don’t want the divers trapped, he said.

Then efforts to pump water out of the ship were temporarily halted Friday because diesel oil was leaking from The Sullivans into the harbor.

The Coast Guard and an environmental contractor are monitoring the water that’s being pumped out of the ship and treating it, if necessary, Marzello said.

The decommissioned ship has “residual material” such as diesel fuel in places that aren’t publicly accessible, so authorities are taking environmental precautions, he said. An absorbent barrier is encircling the ship to catch any water contaminated with residual diesel.

“The progressive flooding and positioning of the ship has caused oil from consolidated tanks onboard to leak and escape from the vessel,” the U.S. Coast Guard said in a Facebook post. “Cleanup efforts have begun and will continue until the oil has been removed from the harbor.”

Marzello said that the weather is not helping the efforts to save the destroyer.

“Weather is something that controls our fate, and right now it is not helping at all,” Marzello said. “The winds are coming out of the wrong direction. They’re also very strong and we lost a lot of ground from our work we did yesterday because of it.”

The Coast Guard must approve the plan for removing the water, he said.

“I don’t think you’ll see any movement in the ship until Monday and that particular plan is approved,” Marzello said.

Crews had been able to do some preliminary dives to assess the scope of the problem, but it became too dangerous to have them in the water because of the ship’s listing position.

“We don’t know if she’s going to move any further,” Marzello said.

The winds could shift water levels up to 6 feet or more, he said, “which means now you’re raising that ship, which is now top-heavy, leaning to starboard. What is it going to do? So we’ve got some concerns.”

Once all the water is out, there will need to be some salvaging work done, as artifacts on the ship have been destroyed.

But the damage to the hull is not a surprise. All of the vessels at the Naval Park have leaks, Branning said. A certified diver, he worked in the water plugging about 20 holes on The Sullivans each year, he said. They ranged from about one-quarter inch wide to 3 inches across.

“The hull is just paper thin,” he said.

World War II destroyers like The Sullivans did not have thick hulls to repel shelling.

“Their protection was their speed and maneuverability,” Branning said. “There’s very few of them left, because they weren’t designed to last 80 years by any stretch.”

The Sullivans was commissioned in 1943, seeing action in World War II, Korea and the Cuban missile crisis before being decommissioned in 1965. The ship has been sitting in water since 1968, including nine years in salt water in Philadelphia, before coming to Buffalo, Branning said.

The hull is encrusted with zebra mussels, up to 3 inches thick in some places, he said.

Problems with the ship’s hull prompted fundraising efforts last year that collected more than $1 million. Work to repair the hull went on for a couple of months last year before it was halted in October due to water temperatures. Bidco Marine Group was hired to encapsulate the entire hull with a two-part epoxy system, and the epoxy cannot be used in water cooler than 54 degrees.

Marzello estimated less than 25% of the needed work was done before work stopped.

Work had been scheduled to resume on Monday. Marzello said he isn’t sure whether having the crews resume the repairs sooner would have made a difference.

When he saw photos, Branning said he knew that hatches inside the ship had been left open and water poured in. And when staff realized there was a problem, they were not allowed back on the ship for safety reasons.

But closing the hatches would not have prevented the ship from taking on water from the breach in the side, Branning said.

“The ship is 80 years old, it’s not like she’s waterproof from top down,” Branning said. “It’s like the Titanic. Once one compartment fills up, the water’s going to go somewhere.”

Because the ship floats in the Buffalo River, it is at the mercy of the weather, including high winds and ice scraping along the narrow hull, Branning said.

It remains “too early to tell” what the long-term prognosis is for The Sullivans, Marzello said.

For now, the entire Naval Park — the USS Little Rock, USS Croaker and all buildings — are closed to the public because of the emergency work being done.

© Copyright 2022 The Buffalo News. All rights reserved. This material may not be published, broadcast, rewritten or redistributed.