Is There Sewage in This Carrier’s Water? The Navy Doesn’t Know. 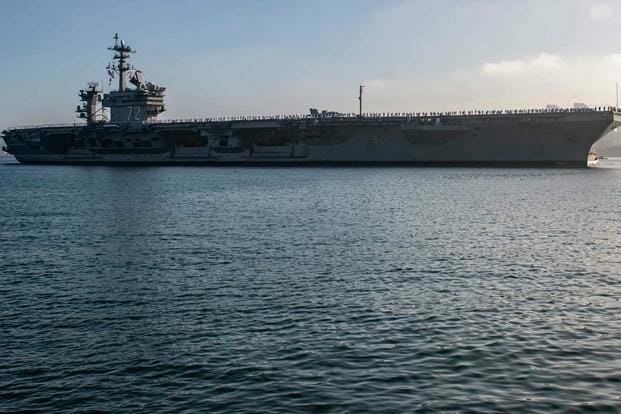 While the Navy was dealing with the fallout of jet fuel-contaminated water aboard one of its aircraft carriers, another carrier was at sea and struggling with a totally different drinking water contamination — E. coli.

Several videos posted by sailors from aboard the USS Abraham Lincoln show bottles of water that are clouded and have brown or gray particles floating inside. In one video, a sailor narrates: “look at the film on top.” On Sept. 22, after reports from sailors about cloudy water, tests on the ship identified E. coli in the water supply.

The Centers for Disease Control and Prevention says that E. coli contamination in municipal water supplies is commonly caused by sewage or animal waste. Military.com asked the Navy whether the ship’s sewage system was responsible for the issue. Cmdr. Zachary Harrell, a spokesman for the commander of Naval Air Forces, said that “there is a thorough root-cause analysis ongoing to determine the exact cause of the contamination.”

Read Next: ‘Instructed Not To Call 911’: Report Reveals Confusion, Failure and Fear in SEAL Candidate Death

In a statement released Thursday, the Navy acknowledged that on Sept. 21, sailors aboard the USS Abraham Lincoln discovered “an odor and cloudy appearance in the ship’s potable water while operating off the coast of Southern California.” The next day, shipboard tests showed that E. coli bacteria was present in three of the ship’s 26 potable water tanks.

In the statement the Navy said that “safe water is a priority that all Sailors take extremely seriously and the crew immediately took action to shift water tanks,” but videos shot aboard the ship of the commanding officer paint a picture of a leader sending mixed messages amid an uncertain situation to a skeptical crew.

“There are all kinds of rumors floating around the ship about what is in the water,” the ship’s commanding officer, Capt. Amy Bauernschmidt, can be heard addressing the crew via the ship-wide announcement system, known as the 1MC, during one of four undated videos posted online.

She then noted that she had in front of her a bottle “of exactly what everyone was talking about” before immediately explaining that she “purposely” took a shower the night before and explained that it “was marvelous.” “I even tasted the water,” she said before explaining it was “good to go.”

According to the timeline provided by the Navy, it took just one day — until Sept. 22 — for shipboard testing to determine that there was E. coli bacteria in three of the ship’s water tanks. In a different video that seemingly was shot after the confirmation of the contamination, Bauernschmidt tells her crew “before anybody starts freaking out … E. coli is an extremely common bacteria.”

“Matter of fact, every single person on this ship has it in their digestive system right now,” the captain went on while sailors captured in the video listening to the announcement can be heard in the background loudly protesting — “that’s not how that works!”

In another video, Bauernschmidt again cast the bacterial contamination as indeterminate by noting that the ship “found the problem, if there is probably — again, E. coli can be good or bad.”

While there are harmless E. coli strains found in nature, the bacteria is also connected to severe illness and even death.

Harrell, the spokesman for the commander of Naval Air Forces, confirmed that the videos depict “some of the many 1MC announcements that Capt. Bauernschmidt made to the crew shortly after the odor and cloudiness in the water was detected.”

“These are the efforts of a commanding officer trying to keep her crew informed to the best of her ability on the status of testing and inspections of the potable water as additional information and test results were coming in,” Harrell added.

The carrier returned from a seven-month deployment to the Pacific in August. It was Bauernschmidt’s first deployment with the ship and a historic milestone since she is the first woman to command an aircraft carrier. She also previously served aboard the Lincoln as the ship’s second-in-command.

Word had already spread among the crew of the issues another carrier in the fleet, the USS Nimitz, was having with jet fuel in its water. That situation also made its way to the public through social media posts, but the Navy was quick to declare the matter resolved — only to reverse course over the ensuing days as the contamination continued to persist and reports of illnesses trickled in.

Bauernschmidt seemingly addresses that concern in another of the undated videos that would appear to have been shot before the positive E. coli test.

“I can say with as much certainty as anything I can: it is not JP5,” Bauernschmidt said, using the Navy’s abbreviation for jet fuel.

She told the ship that “the water I was getting — I literally can’t see, taste anything” before admitting that “everyone on the bridge is looking at a water bottle with me” that “is cloudy and personally tastes like saltwater to me.”

In another video, Bauernschmidt also admits she’s not sure what the contaminant is, but that it’s “not JP5 right now … I just know it’s not a bacteria.”

The Navy’s statement claims that “the odor and cloudiness in the water abated by Sept. 22” and that the presence of E. coli “was not related to the reports of odor and cloudiness.” Two days later — Sept. 24 — the ship sent samples off to be analyzed by an outside lab.

Those results came back on Sept. 26 and, according to the statement, showed “the water was within drinking water standards for pH, turbidity, aluminum, copper, lead, sodium, and hardness.”

In one of the videos, Bauernschmidt explains that the ship got “lab results back.” She says that “they were all negative” before immediately saying that “there were two that were inconclusive, which meant … they couldn’t 100% tell for 100% certainty that there wasn’t something in there but definitely negative for JP5.”

The ship ultimately pulled back into port on Oct. 3, and the Navy says that “since that time, the ship has been connected to the San Diego water supply.” Furthermore, the sea service says that “the affected water tanks remain isolated and will be deep-cleaned and inspected during the ship’s ongoing maintenance period.”

In Thursday’s statement about the Lincoln, the Navy also said “free bottled water was made available to the crew” after the contamination was revealed and that “there have been no confirmed cases of illness related to the ship’s water.”