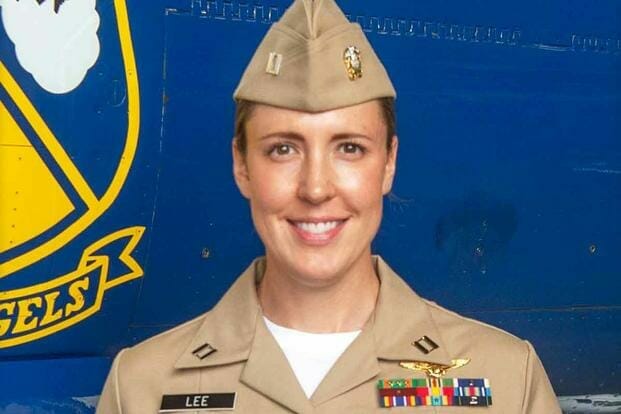 The Navy’s aerial demonstration squadron — the Blue Angels — announced that it has selected its first female jet pilot in the unit’s 76-year history.

In a social media post Monday, the Blue Angels announced that F/A-18 Super Hornet pilot Lt. Amanda Lee has been selected to join the famed unit. Lee is currently assigned to the “Gladiators” of Strike Fighter Squadron (VFA) 106 out of Naval Air Station Oceana, Virginia.

Lee’s name was among six officers who will join the squadron in September and start performances next year.

Read Next: Coast Guard Turns Eye Toward Recruitment, Retention as It Misses Goals

Lee, who goes by the call sign “Stalin,” enlisted in the Navy in 2007 and began her career as an aviation electronics technician, according to a Navy biography. She was later selected by the service’s enlisted commissioning program, Seaman-to-Admiral (STA-21), and became an officer in 2013 after receiving a Bachelor of Science in biochemistry at Old Dominion University. She was designated a naval aviator in April 2016.

The Blue Angels were formed in 1946 by then-Chief of Naval Operations Adm. Chester Nimitz “in order to raise the public’s interest in naval aviation and boost Navy morale,” according to the group’s website. Since that time, the unit has flown a variety of planes; it moved to the Super Hornets in 2021.

Now, nearly 50 years after women first flew jets for the Navy, the service’s most public and visible squadron has welcomed a woman into its jet pilot ranks, though it noted in its announcement that “hundreds of women representing the Navy and Marine Corps have served with the Blue Angels during the last 55 years.”

The first female aviator to qualify on tactical jets was Capt. Rosemary Mariner in 1974. Though limited to training and other non-combat roles until 1993, female naval aviators have gone on to achieve other significant firsts. Mariner herself would be one of the first women to serve aboard a Navy warship, as well as the first female pilot to command an operational squadron. More recently, Capt. Amy Bauernschmidt, also a Navy pilot, became the first female executive officer of an aircraft carrier in 2017 and, in 2021, the first female commander of one of the Navy’s largest warships.

Lee was one of the pilots who participated in the first all-female flyover in Mariner’s honor when the pioneering pilot died in 2019.