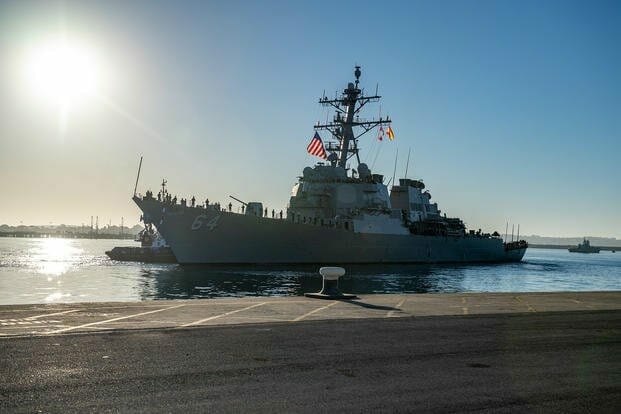 Federal agents are helping the Navy investigate a fire that broke out on a destroyer at a Florida base just before Christmas, the service has confirmed.

The Bureau of Alcohol, Tobacco, Firearms and Explosives, or ATF, was helping in the investigation Monday after the incident aboard the USS Carney in the early morning hours of Dec. 23, according to the Navy. In an email, Lt. Cmdr. Jason Fischer confirmed that ATF agents were aboard the ship.

The ATF has special agents who investigate arson and deploy to potential crime scenes quickly. The agency bills itself as the primary federal source for fire investigations and knowledge, and is charged with enforcing federal arson laws.

“The Navy is leveraging all available tools during this investigation, to include support from partner agencies,” Fischer added.

The service says the Carney suffered a fire last week while it was moored at Naval Station Mayport near Jacksonville, Florida, at around 3:43 a.m. Sailors aboard the ship responded to the fire, along with Jacksonville Fire and Rescue and a team from the nearby destroyer USS Mason.

The fire was quickly extinguished, but Fischer said that six sailors were evaluated by the Jacksonville first responders for smoke inhalation and taken to a nearby hospital for further evaluation. They were released the same day.

A Twitter account that specializes in open-source intelligence was monitoring the base’s radio transmissions and told Military.com that initial reports described the blaze as a medium-sized class-A fire in one of the ship’s compartments. Class-A fires occur when things like wood, cloth, paper, rubber or plastic catch fire.

This incident is the second publicly acknowledged fire to occur aboard a ship at Mayport. In late July, an electrical fire broke out aboard the USS Milwaukee, a littoral combat ship, but was quickly put out.

The Navy’s most destructive shipboard fires in recent history, however, have tended to occur while ships were undergoing repairs in shipyards.

The fire that gutted the amphibious assault ship USS Bonhomme Richard in 2020 occurred while the vessel was about two-thirds of the way through her scheduled maintenance. The Navy accused a junior sailor of setting the blaze, but the case fizzled at court-martial. The ship has since been decommissioned and sent for scrapping.

In 2012, a shipyard fire aboard the submarine USS Miami also gutted that boat and led to its decommissioning. A shipyard worker was convicted of setting the blaze and sentenced to more than 17 years in prison.