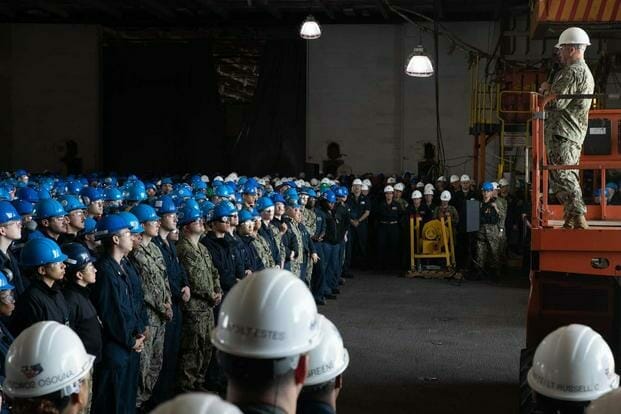 The Navy found that three of the latest suicides among the crew of the USS George Washington aircraft carrier had no clear connection to living conditions on the massive docked ship, according to an investigation report released Monday.

The findings are the culmination of the first of two known investigations into a string of suicides around the carrier, which is undergoing a years-long maintenance overhaul in a Virginia shipyard that has caused a lack of basic amenities, such as hot water, and hour-long commutes for crew. The three deaths involved two sailors found in housing in the Norfolk area and a third found aboard the ship.

The deaths were the last in a murky history of suicide aboard the George Washington. Military.com initially reported that sailors were told the ship had experienced 10 suicides in under a year by its commander, Capt. Brent Gaut. Since then, the Navy has offered differing and lower figures, but it has never confirmed or denied what Gaut told his crew.

Read Next: Army Announces Plan to Give Some Retirees More Time to Transition Out of the Military

“While there were common stressors amongst the three [George Washington] sailors who died on or about April 2022, such as the general stress associated with conditions in the shipyard environment, it is the opinion of the investigation team that the deaths of RS3 Sharp, IC3 Huffman, and MASR Mitchell-Sandor were not related or connected,” the report concluded.

The investigation pointed to more personal stress in the sailors’ lives that drove each of them to end their lives.

Sharp had an argument with his wife the day of his death that led to a “physical altercation.” Investigators felt that “these rapidly escalating events, combined with heavy intoxication and a readily available firearm, inhibited RS3 Sharp’s ability to develop a rational exit strategy from the situation, and likely pushed him to the decision that suicide was his only way out.”

In Huffman’s case, investigators found a long history of mental health struggle and treatment. “While in the Navy, she had 34 confirmed prior mental health encounters, along with a previous suicide attempt in 2020,” the report said.

Investigators also discovered that the Navy’s inability to give Huffman a solid diagnosis for her condition and, in turn, an answer to her future in the service caused her anxiety and led to difficulty making plans.

Still, investigators concluded that an argument with her boyfriend and heavy drinking “culminated in [her] making an impulsive decision to end her life.”

The Navy found that Mitchell-Sandor’s decision was the least impulsive.

Interviews showed a history of him weighing whether to end his life as far back as basic training. Meanwhile, life aboard the ship caused him significant stress and led him to not only sleep in his car but to often travel home to Connecticut — an eight-hour drive.

The result was a sleep deficit that only grew in the weeks leading to his death. Investigators determined that in the 2½ months prior to his death, he had “an approximate sleep debt of 130 hours.” Ultimately, the report says he “came to the belief that he was trapped in his present situation with no way out.”

Rear Adm. John Meier, the commander of Naval Air Force Atlantic, wrote in a letter after receiving the report that “the general stress of the shipyard environment was not the root cause of these deaths,” though “it was certainly a contributing factor in MASR Mitchell-Sandor’s case.”

Meier noted a second ongoing Navy investigation looking directly at how life in a shipyard affects the crew.

“It is safe to say that generations of Navy leaders had become accustomed to the reduced quality of life in the shipyard, and accepted the status quo as par for the course for shipyard life,” he wrote.

Meier’s boss, Adm. Daryl Caudle, commander of the Navy’s Fleet Forces Command, also determined that the three suicides were “independent events,” and there was no direct connection.

The lack of a direct link between the suicides and the rough quality of life aboard the ship found in the pages of the report stands in contrast to what sailors have previously told Military.com.

When news of the deaths first came to light, sailors described living aboard the carrier — then a necessity for the ship’s most junior sailors — as a construction zone.

They described constant problems with ventilation and hot water during cold winter months, as well as around-the-clock noise and debris from things like welding and metal grinding. More senior sailors who lived off the ship said a lack of parking meant commuting could take more than an hour despite living nearby.

In fact, just weeks after news of the suicides became public, Meier told reporters, “If I knew then what I know today, I think we would have clearly delayed crew move aboard.” The Navy’s top sailor, then-Master Chief Petty Officer of the Navy Russell Smith, told the ship’s crew that the service “probably could have done better to manage your expectations coming in here.”

“What you’re not doing is sleeping in a foxhole like a Marine might be doing,” Smith told a sailor who asked a question about quality of life aboard the ship.

Investigators found that not only were there many sailors willing to share their concerns with berthing spaces, but that leaders aboard the ship were unaware of some of these issues.

Meanwhile, the mental health support system on the ship was breaking under the stress. The ship’s psychologist, known by the title “Psych Boss,” told investigators that sailors who came to him for routine, non-emergent mental health assessments faced a wait of one to two months due to a backlog.

“Even before the three sailors died in April 2022, the patient volume that Psych Boss and Psych Tech had been seeing was described as ‘overwhelming,'” the report explained.

Meanwhile, the ships’ behavioral health technician told investigators that enlisted supervisors “‘don’t have time’ to deal with mental health issues of their subordinates.”

Finally, the report also found that sailors were either unaware of some mental health resources available to them or did not have trust in it. “Multiple sailors interviewed felt it was depressing to work onboard the ship during [the overhaul],” the report said.

If you or someone you know needs help, the Veterans Crisis Hotline is staffed 24 hours a day, seven days a week. Dial 988, press 1. Services also are available online at www.veteranscrisisline.net or by text, 838255.