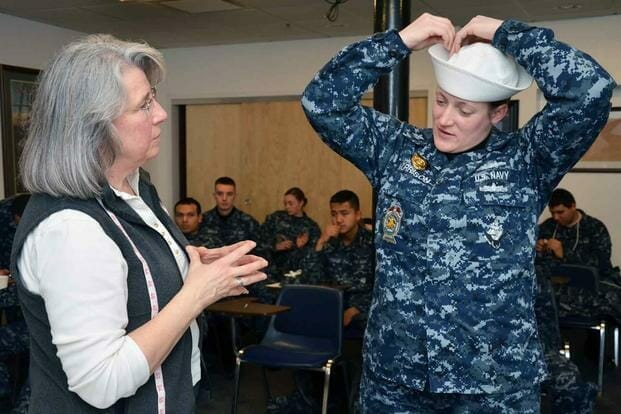 The Navy is continuing its yearslong quest for a better-fitting uniform for female sailors with a fit-test survey in Norfolk, Virginia, this month. The goal is to get enough measurements to make sizes better and more accurate for women.

The project comes at a time when complaints about the fit of female uniforms persist in the sea service, but service members in other branches struggle to even buy uniform items.

Courtney Williams, a spokeswoman for the Navy Exchange — the command in charge of the project, told Military.com in an email that “the current fit of the U.S. Navy female uniform is not standardized among all styles and was developed in the 1980s.”

The Navy is looking to measure about 400 female sailors so that it has the data to reevaluate the sizing and shape of the female Service Dress White shirts, Khakis and Summer Whites, Williams said.

While the survey will run until July 29, the Navy says that it has gotten more than 100 women over its original goal of 400 to participate.

“While the first week was a bit of a slow start, [researchers] saw an influx of participants. … The second week’s schedule is now fully booked,” Williams said.

Uniform fit and sizing complaints are not new for the Navy. Since at least the early 2010s, there have been studies and surveys indicating that female sailors found at least some uniforms uncomfortable and ill-fitting.

A 2013 Navy Women’s Uniform Survey, for example, found that only 54% of female chief petty officers and 42% of female officers were satisfied with the professional appearance of the then-blue Navy Working Uniform. That same survey found that the comfort of various service uniform components was abysmally low, with only about one-third of sailors finding the items comfortable to wear.

The issue was further exacerbated by the Navy’s push in the mid- to late-2010s to get women to wear gender-neutral uniforms, leading to outcry from both men and women.

In 2017, frustrated female sailors successfully lobbied Congress to include in that year’s defense policy bill a measure that ditched unisex hats for female officers and forced the Navy to include women in future uniform wear tests, along with other reforms.

Williams said that, while the Navy Exchange “has been able to make a number of updates and improvements to our female uniform patterns, this project will fulfill a more comprehensive approach and establish consistency among all uniform types.”

Though the Navy is making progress in the fit of female uniforms, other issues for women persist across the military. A report released in 2021, for example, found that women often pay far more for uniforms than men. That’s when they can buy uniforms at all. Issues with a contractor have left women in the Army and Air Force without any ability to buy the Improved Hot Weather Combat pants — a coveted item, especially as summer temperatures have scorched much of the country.

Meanwhile, the military’s newest service, the Space Force, noted that it was designing its uniforms with women in mind from the start when it unveiled its futuristic outfit last fall.

Related: Yes, There Is a ‘Pink Tax’ on Women’s Military Uniforms, Report Finds