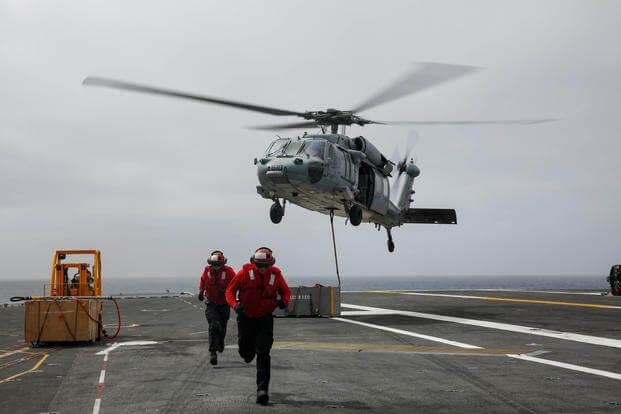 The Navy has cleared the pilot and crew of any wrongdoing in a helicopter crash that killed five sailors in August 2021 off the coast of San Diego, instead laying blame on a failed part of the aircraft’s rotor.

According to the report, released Tuesday, the service’s investigation into the incident found that a “failure of the yellow damper hose” on the MH-60S Seahawk led to the “total loss of main rotor system damping and the immediate onset of severe vibrations upon touchdown.”

The helicopter, which was operating off of the aircraft carrier USS Abraham Lincoln, ended up losing control when it was landing, struck its rotors on the deck, and fell into the sea. In addition to the loss of nearly the entire aircraft’s crew of six, five sailors on the deck of the ship were also injured.

Read Next: Justice Delayed or Denied: The National Guard Struggles with Handling Accusations of Sexual Assault and Harassment

The report offers more detail into the deadly crash and what the Navy is doing to prevent future incidents.

It explained that the helicopter was finishing a two-and-a-half-hour flight in which it was the “plane guard” for the carrier — a response aircraft ready to begin search and rescue in the event of a crash — when it crashed.

As the helicopter came in for a landing, it first experienced heavy vibrations, then it swung to the left about 50 degrees, then 200 degrees to the right. Its rotor blades struck the flight deck, and debris damaged a nearby compartment, as well as three nearby T-45 Goshawk training jets.

Though the report doesn’t explicitly lay out how the sailors on deck were injured, it does note that “shrapnel from the detached rotor blades impacted personnel located in the Arresting Gear Officer pit.”

The helicopter fell over the side of the deck, tail first. According to testimony given by the sole survivor from the helicopter crew, “he escaped from the left gunner’s window and swam to the surface as soon as he was able to get free.” By his estimate, he swam about 25 feet to reach the surface.

The sailor, a naval aircrewman third class whose name was redacted in the report, told investigators that the rest of his crew members were still in their harnesses before the aircraft went overboard.

After three days of searching, the Navy’s commander of Third Fleet, Vice Adm. Steve Koehler, the man in charge of personnel on the West Coast, declared that the crew was dead on Sept. 3, 2021. Military.com reported that the Coast Guard paused its search flights on Sept. 2, although the service didn’t publicly announce the decision until two days later.

According to the final report signed by Vice Adm. Kenneth Whitesell, commander of Naval Air Forces, the Navy addressed the mechanical issues with the damper hose by issuing new instructions for proper maintenance and ordering a study to be done on how often the hose should be replaced. At the time of the incident, it was Navy policy that the hose be used until it failed.

A supplemental report also noted that “this mishap casts doubt on the functionality and reliability” of the life preservers worn by the helicopter’s crew. Whitesell ordered the inspection of 10% of aircrew life preservers to find out whether they are functional throughout the fleet and a study of the depth at which a properly functioning life preserver fails.