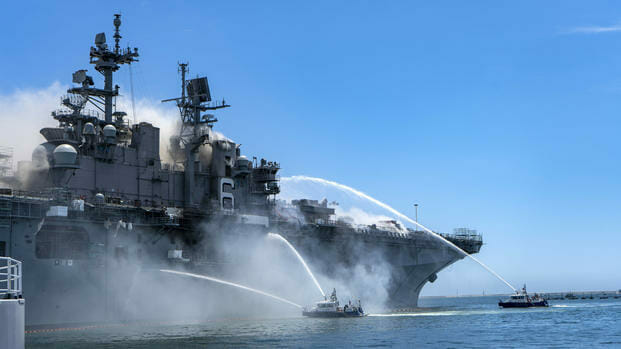 The former commanding officer, executive officer and command master chief of the USS Bonhomme Richard were among more than two dozen sailors reprimanded for a raging fire that destroyed the ship in its San Diego port in 2020, the Navy announced Friday.

The Navy said it focused punishments on Bonhomme Richard’s leadership and its fire response team in the wake of the worst warship fire outside of combat in recent history. The ship’s three top leaders at the time of the fire were given punitive letters of reprimand, with Capt. Gregory Scott Thoroman, who was the commanding officer, and Capt. Michael Ray, the executive officer, also ordered to forfeit pay.

Retired Vice Adm. Richard Brown, who was commander of Naval Surface Forces for the Pacific Fleet at the time, was also censured by Navy Secretary Carlos Del Toro. The service said the punishments are not the end of its efforts at accountability for the fire; in a separate case, an enlisted sailor allegedly connected to the start of the blaze faces a trial in September.

The Bonhomme Richard was docked for a maintenance period two years ago this month when it caught fire and burned for at least four days, sending plumes of thick smoke into the California sky. A Navy investigation released in October found that the fire on the Wasp-class amphibious assault ship was “completely preventable.”

After the fire, the Navy decided to scrap the 22-year-old ship because it would cost $2.5 billion and take five years to repair the extensive damage.

“When leaders’ actions or inactions result in the loss of life or capital resources, the senior leadership of the Department of the Navy has a responsibility to determine the root cause and hold those accountable,” Del Toro said in an earlier message to the department that was included in the Navy announcement Friday.

“This fire could have been prevented with adequate oversight into the ship’s material condition and the crew’s readiness to combat a fire,” the secretary said.

In all, the Navy said it has made 27 individual disposition decisions to sailors since its investigation into the warship fire was released last fall. None of the Navy personnel actions announced Friday included judicial punishments.

Such punishments are less severe than criminal charges under the Uniform Code of Military Justice, but they can also be damaging and even derail military careers.

Brown, who retired in August 2020 after 35 years in the Navy, was singled out by Del Toro for his role overseeing the fire response as the commander of Naval Surface Forces. The retired admiral was tasked with overseeing the ship’s condition, its maintenance period and the readiness of the crew to fight fires, according to the secretary.

“You failed to identify and mitigate against the lack of oversight that contributed to the loss of the ship,” Del Toro wrote in the July 15 letter to Brown. “Accordingly, you are hereby censured for failing to effectively ensure appropriate levels of training and readiness in units under your command.”

Brown pushed back against the criticism on Friday, according to USNI News. He told the outlet that the Navy had “abandoned me for political expediency.”

Meanwhile, Seaman Apprentice Ryan Sawyer Mays is set to be tried by court-martial in September on charges of arson and hazarding a vessel. The Navy alleges the sailor was responsible for starting the fire on the Bonhomme Richard and charged Mays a year after the ship was destroyed.

Mays was depicted as a disgruntled sailor who washed out of Navy SEAL training, according to court documents outlining findings by the Naval Criminal Investigative Service. After dropping out of SEAL training, he became an undesignated seaman on the ship, which is considered a low-status and undesirable position tasked with the hardest labor. Shipmates described him as hating the Navy, according to investigators.

The Navy alleged in a search warrant that a witness saw a sailor whom he was 90% sure was Mays emerge carrying a bucket from the Lower V area of the ship, where the fire is believed to have started, minutes before smoke appeared.

But Mays has maintained his innocence. “What they’re trying to do is make Mays a scapegoat for a billion-dollar ship that ended up burning as a result of other people’s negligence,” his attorney told Military.com in March.

Related: Sailor Charged in Bonhomme Richard Fire Will Head to Trial in September