Navy, Marine Leaders See Ukraine Invasion as a Chance to Prepare for China 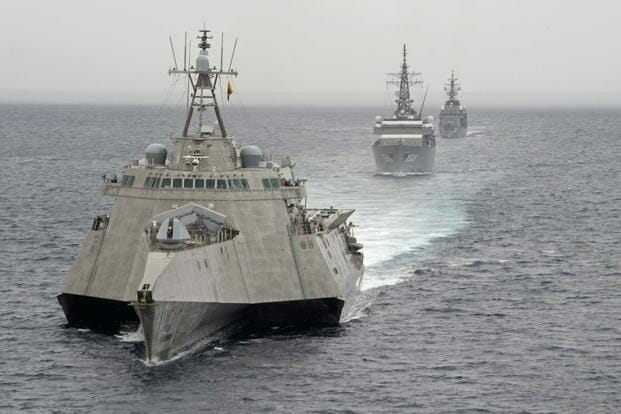 Officers and leaders in the maritime services say that they are paying close attention to the Russian invasion of Ukraine but not because of the threat the former Cold War foe poses. They say the conflict will provide key advice about how to deter China.

“The conflict in Ukraine, for me, validates the last couple [national defense strategies],” Gen. David Berger, commandant of the Marine Corps, told an auditorium full of people Monday at the Sea-Air-Space Exposition outside of Washington, D.C.

Berger explained that the conflict in Europe showed him “that you need a really strong land force to deter Russia in Europe.” Conversely, in the largely aquatic Indo-Pacific region, the top Marine said that “you need a very strong Navy-Marine Corps team.”

Adm. Mike Gilday, the military head of the Navy, cautioned the audience, largely made up of military officers and industry representatives, that “given everything that’s going on right now in Europe, I think the three of us in this group say, ‘Keep your eye on China.'”

Gilday was referring to himself, Berger and Adm. Karl Schultz, the commandant of the Coast Guard, who all made up the panel.

The Navy’s top officer noted that one of his key takeaways from the conflict was a reinforcement of his service’s choice of the “divest to invest” strategy that calls for the shedding of some aging and ineffective ships in order to save money that is then invested in new technologies.

The strategy is controversial and has been sharply critiqued by lawmakers as recently as last week.

“Let’s keep it real with respect to what we’re going to field out there,” Gilday said. “We can only have so many ready ships that are manned properly, they’ve been trained properly, that [have] ammunition in their magazines, that have the proper maintenance.”

Gilday cautioned the audience not to focus solely on the Navy’s total ship count. “It’s more than just a numbers game — it’s a capabilities and a numbers game,” he argued.

“Take a look at the 125 [battalion tactical groups] that Vladimir Putin has positioned around Ukraine. That’s not the force that any of us want,” Gilday said.

Meanwhile, in a different panel discussion, the Pentagon’s Dr. Ely Ratner, the department’s assistant secretary for Indo-Pacific Security Affairs, said that “Ukraine is a prime example of what happens when” the respect for “international rules-based order” breaks down.

“We understand that [China] is pursuing an alternative regional international order — one that would not be defined by the kind of principles and rules that we believe that undergirded the kind of stability and prosperity that we’ve seen for some time,” Ratner added.

To counter that, Gilday argued that the Navy has to keep sailing ships in the Asia-Pacific region to keep an eye on China.

“Think about how important [forward presence] was for the United States, and the world really, to restricting Russia’s activity in Ukraine,” Gilday said. “We pulled the rug out from under Vladimir Putin with respect to his ability to use false flag operations as a pretext to cross the border and invade.”