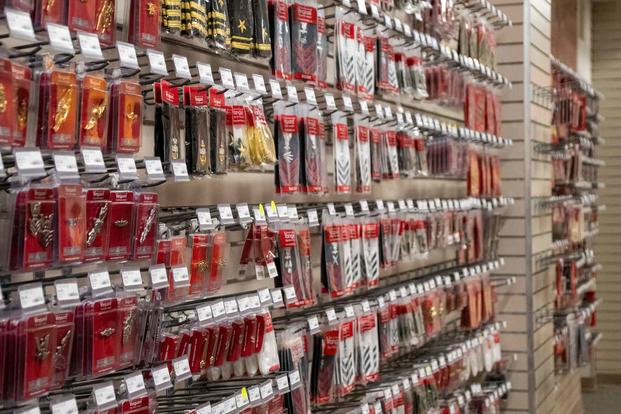 Sailors across the service had to make a small but noticeable uniform change on Oct. 1: They had to swap out the loops of cloth with their rank insignia from the matching digital green camouflage to plain black.

The change, first announced in May, should have been easy enough. Unlike many of the uniform changes sailors have had to deal with in the last few years, this one was cheap, quick and easy. The tabs are about $3 each. Or, at least, that was the idea.

But what followed was a shortage scare fueled partly by online posts that led to ballooning prices and scalping. Demand for the new tabs had indeed led to small shortages, but the problem was suddenly blown up into something much larger than it actually was.

The Navy Exchange “has a total of 96,000 black rank tabs currently in stock, available in store and online, with more arriving weekly from our vendor,” Courtney Williams, a spokeswoman for the exchange, told Military.com.

Several weeks ago, reports of shortages of the insignia began to circulate on Navy-themed Facebook and Reddit groups.

Users suggested that sailors having trouble getting their hands on the new tabs take insignia meant for blue coveralls and color them black with Sharpie markers. Others suggested buying a higher rank and pulling out the embroidery for any extra chevrons.

But then there were the efforts to sell tabs at an exorbitant markup online.

One eBay shop, apparently located just outside of Pearl Harbor, Hawaii, is still selling the rank tabs for $7 — more than twice what they cost at the Navy Exchange — and charging another $7 for shipping. Then there are the Facebook Marketplace listings that were asking anywhere between $70 from a seller near Norfolk, Virginia, for one E-4 tab to $500 for the same tab in San Diego.

It’s not clear whether all the overpriced listings were serious or a way for sailors to poke fun at the perceived problem. However, according to the Navy Exchange, none of this, neither the jury-rigging nor the scalping, is necessary.

In fact, Williams said that the exchange anticipated “a heightened demand” following the Navy’s May announcement, and it “increased all automatic replenishments and worked with our vendor to ramp up the tab’s production.”

The policy change for making black tabs standard comes two years after the Navy first allowed sailors to volunteer to wear the more high-contrast version following complaints that the camouflage version left uncomfortably long stares at each other’s chests in an effort to discern a shipmates’ paygrade.

So how can the Navy Exchange square the posts online with its own certainty of available supply? After all, while listings for tabs being sold for hundreds of dollars can be dismissed as trolling, other posts show sailors offering to buy tabs for others and then show photos of them clutching handfuls of the cloth loops.

Williams said it appears that behavior was actually driving some of the shortages. She acknowledged that “stock levels of the black rank tab at some NEX uniform shops may look sparse at times, it’s because some locations are selling out in less than 24 hours after being restocked.”

One of the reasons is sailors buying in bulk.

“For example, this summer while at NEX Norfolk, Virginia, an executive officer of a command based out of Millington, Tennessee, purchased just under 40 black rank tabs for his junior enlisted and junior officers,” Williams recalled.

“That size of a buy left a short-term strain on NEX Norfolk’s stock,” she said.

Williams said leadership at the Navy retailer has told commands trying to take care of their sailors with a bulk buy that they should go through a special team instead of just emptying shelves.

Meanwhile, sailors should not pay inflated prices for the tabs, she said. “The normal timeframe to restock is within a day,” she said, before adding that “on occasion the tab’s replenishment for a particular store has taken longer, but no more than a week.”

For those sailors, Williams insists that there is enough supply available. However, “if an individual sailor has any issues locating a needed uniform item, including a black rank tab, they can contact WeCare@nexweb.org or speak on-location with a specialized NEX uniform shop associate.”