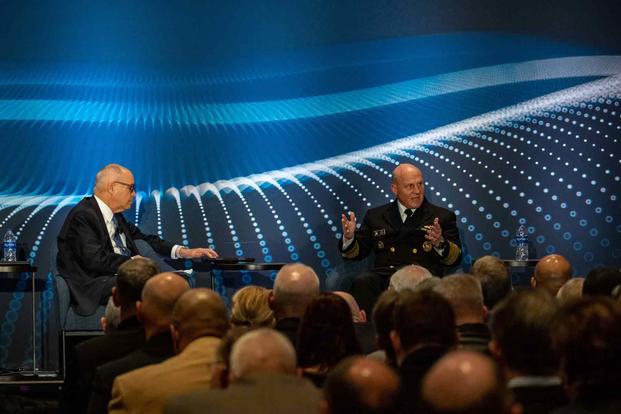 As Navy leaders left another conference behind, one thing that emerged from the Surface Navy Association panels and discussions this week was an emphasis on the strength and capability of sailors — a shift that seems part of an effort to boost recruiting and push back against a growing political narrative.

The service and other military branches have become “woke.” Or at least that is an increasingly common message from politicians and pundits on the right who claim the military has weakened itself by adopting policies that support or encourage diversity and inclusion. Now that a Republican-controlled House has been seated, lawmakers are likely to intensify the grilling of military leaders over these policies.

The Navy’s top officer, Chief of Naval Operations Adm. Michael Gilday, told an auditorium full of people at the annual conference in Arlington, Virginia, that his sailors are the opposite of weak, that they are “doing some pretty amazing things.”

Read Next: Military Families Stressed by Delay in Parental Leave Rules from the Army, Navy and Marine Corps

“We are strong, we are ready, we are capable, and we’re ready to fight tonight,” Gilday boasted, adding that the “narrative about weakness is not true.”

“I do not tolerate any political figure … politician, state, government, local, federal, to talk bad about the men and women who serve in our United States Navy,” Del Toro told his audience to a round of applause.

The pushback may be at least partly practical — reaching the families of potential recruits.

As Gilday continued in his remarks, he moved into another topic that hinted at the reason behind the shift — recruiting. After saying that he hasn’t heard any concerns on weakness from sailors, the admiral explained that key influencers such as “mothers and fathers, aunts and uncles, grandparents, teachers, school administrators” need to see a positive side of the Navy.

Gilday has familiarity with taking heat over efforts to add more diversity into the Navy. His inclusion of Ibram X. Kendi’s book, “How to Be an Antiracist,” on his 2021 reading list became a major talking point among critics. Rep. Jim Banks, R-Ind., a Navy Reserve officer, wrote a letter to Gilday claiming the book would undermine morale and threaten national security.

However, much of the criticism has been far less specific and instead slammed the military for policies that either ease decades-old restrictions or aim to make service easier. For example, Thomas Spoehr, director of the Center for National Defense at the conservative think tank The Heritage Foundation, cited policies such as lifting the ban on transgender service members or HIV-positive troops being allowed to deploy as “the chief worry of grizzled American veterans today.”

Former Secretary of State and CIA Director Mike Pompeo cited the military’s COVID-19 vaccination mandate and efforts to combat discrimination along gender and racial lines as the reason “America [is] less safe” in an editorial he wrote for Fox News.

The problem the Navy — and every other military branch — finds itself in, however, is that the young generation of people they want and desperately need to join does not appear to buy into the narrative that the military is under threat from those ideas.

Capt. Dave Benham, a spokesman for the Navy’s recruiting command, told Military.com in a phone interview Tuesday that the research they’ve done shows that “17- to 24-year-olds, our primary demographic … values organizations that embrace and model — and not just give lip service to but model — diversity, equity and inclusion.”

The Navy’s efforts at keeping sailors in the service — which Gilday said have been doing “really well” for a while — suggest that there’s nothing new driving sailors out of the military.

So, the Navy is attempting to appeal to “folks that have influence over those who are recruitable — teachers, coaches, parents … and to try and make sure that they have an understanding of what the Navy is really all about and to be open to that conversation,” according to Benham.

But the service also has to speak to what works for the younger generation it actually wants to recruit into service, instead of the ones that came before it.

“It’s always been that way historically, in our nation. Whether it’s been a Republican administration, Democrat administration, we have always supported our troops in uniform,” Del Toro said, before adding that “we need to continue to do that.”

In the meantime, the Navy has pulled out about every other stop in the recruiting handbook to make it easier and more enticing to join.

It offered historically high bonuses, opened up the maximum age of enlistment, and even relaxed the requirements for the standard military entrance exam. There’s also a new incentive program for sailors in the fleet to help recruit, too.

The Navy has also been marred by several major scandals over the last year like a suicide crisis, issues with clean water on ships, and a struggle to issue sailors key discharge paperwork. Though, given that recruitment problems are military-wide, it’s hard to say whether these stories play heavily into people’s decisions to enlist or not.