Navy Wants to Keep Hawaii Fuel Facility After Draining It, Looking for Another Use 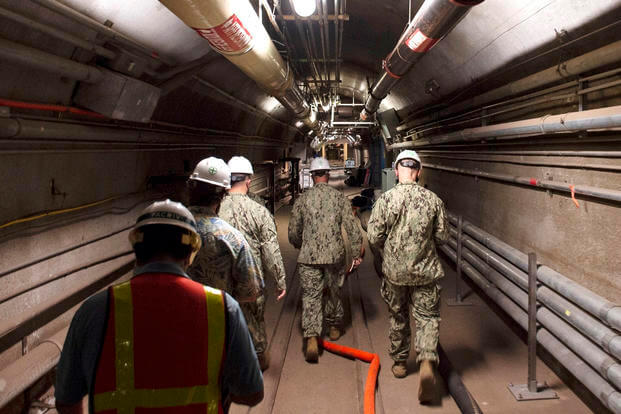 The Navy wants to keep its Red Hill fuel facility, including the 20 cavernous fuel tanks, surge tanks and pipelines, in the ground after it permanently retires the facility from fueling operations, according to a plan it submitted Tuesday to the Hawaii Department of Health.

The Navy wants to keep its Red Hill fuel facility, including the 20 cavernous fuel tanks, surge tanks and pipelines, in the ground after it permanently retires the facility from fueling operations, according to a plan it submitted Tuesday to the state Department of Health. Defense officials say they also hope to consult with the community to come up with alternatives for using Red Hill for nonfuel purposes.

The closure plan, which must be approved by DOH, also details how the Navy intends to clean sludge and other waste left in the tanks and pipelines after fuel is drained and the Navy’s plans for remediating the environment, including cleaning up petroleum contamination in the soil and groundwater.

The Navy was required to come up with a plan for permanently closing Red Hill under a May 6 emergency order issued by DOH. Options include removing the facility, filling it in or leaving it in place without filling it. The Navy added another option : closing Red Hill for fuel operations but finding another use for it.

“If we do pursue a closure in place with beneficial reuse, then we will work with the community to see what inputs they have for how we might be able to reuse the space there, ” said Meredith Berger, assistant secretary of the Navy for energy, installations and environment, during a news conference at Joint Base Pearl Harbor-­Hickam. “We will continue to make sure we are protective of the environment, of the people and of the community, and we are not–I want to make sure this very clear–we are not going to pursue any beneficial reuse option that would contain potential contaminants, and none of the options that we have laid on the table would be a fuel reuse.”

Defense officials were hesitant to discuss potential uses of the Red Hill facility, though did mention the idea of using it for a hydroelectric plant to provide an alternative energy source, an idea that has been floated in the past.

“It is not something that has ever been proposed before, and it is really the Navy’s burden to say what that beneficial reuse could and would be, ” she said. “And then we would have to reevaluate it from there.”

Hawaii Sierra Club Director Wayne Tanaka said he didn’t think reusing Red Hill would be safe or even feasible given its dilapidated condition and location directly above an aquifer.

“We know that (the tanks ) have been actively corroding for so long, and we really don’t have a good idea of the integrity of their steel liners or even the concrete that is holding them up, ” he said.

Tanaka said the Navy also must consider the possibility that contaminants from the tanks and pipelines will leach into the environment in the coming decades, including pollutants from corroding metal and the breakdown of protective coating.

The Red Hill fuel facility was built between 1940 and 1943, spurred by global tensions leading up to World War II. The 20 massive fuel tanks, each capable of storing up to 12.5 million gallons of fuel, were installed inside cavities mined into a volcanic mountain ridge east of Pearl Harbor. Three 2.5-mile pipelines run from the tanks through an underground tunnel to Pearl Harbor fueling piers.

The tanks were constructed out of concrete that was lined with a thin layer of steel and sit below 100 feet of rock. Each tank is large enough to envelop Aloha Tower.

The Navy says it plans to provide DOH in December with an independent analysis of the available options for closing the facility, including an engineering analysis, cost estimates and timelines for the different alternatives. It’s not clear why that analysis wasn’t completed prior to the Navy submitting its closure plan and its recommendation that Red Hill remain in place and be repurposed.

Berger said the Navy had received input from internal and external experts in coming up with its closure plan and that it submitted it to DOH prior to the more robust analysis of closure options to make sure that it made DOH’s Nov. 1 deadline.

The Navy’s report concludes that leaving the facility in place and filling it in with some sort of material would be risky for workers as there isn’t enough room to stage material and equipment. Surrounding residents also would have to deal with increased traffic from dump trucks and trucks hauling construction equipment that would last for about five years, according to the Navy.

The Navy says that trying to completely remove the tanks, including the concrete and steel liners, would pose “extreme safety concerns ” and could cause a “catastrophic failure due to destabilization of the substrate.” Only removing the steel liners also could be difficult, posing “engineering feasibility challenges ” and safety concerns. Those two options also would be costly.

The Navy says the closure-in-place option is the easiest and could be done in two to three years after all the fuel is drained from the Red Hill tanks. Implementing an alternative use for Red Hill could take an extra year, according to the Navy’s plan. Under those scenarios Red Hill would be permanently closed around 2027.

As part of permanently shutting down Red Hill, the Navy also has to clean up its environmental contamination. Historical records and Navy documents indicate that there may have been at least 76 fuel leaks from Red Hill totaling 180, 000 gallons of fuel.

The soil and groundwater below the facility is contaminated with petroleum, according to soil vapor and groundwater monitoring reports. It’s not clear to what extent the Navy will be able to clean up all of the contamination, particularly if the tanks are left in place.

Navy officials said they are exploring new technologies that could assist.

Navy Region Hawaii Commander Rear Adm. Steve Barnett said he would defer to the engineers as to whether petroleum in the ground beneath the tanks could be cleaned. up. “But I can tell you that there are some things that I think we can do with soil vapor monitoring … and other new technologies that we are looking into to see what industry is doing for things like this.”

Red Hill was ordered to be shut down earlier this year after leaks from the facility contaminated the Navy’s drinking water system in 2021, sickening military families.

The Honolulu Board of Water Supply, which has civilian water wells that have been affected by the Navy’s fuel contamination of the aquifer, said closure of Red Hill was long overdue and that it hoped the timeline could be expedited.

The BWS “remains concerned with the length of time suggested by the Navy to accomplish tank closure, the lack of details in the closure plan, lack of meaningful stakeholder and public involvement, and the Navy’s proposed ‘closure in place’ approach, ” BWS said in a statement.