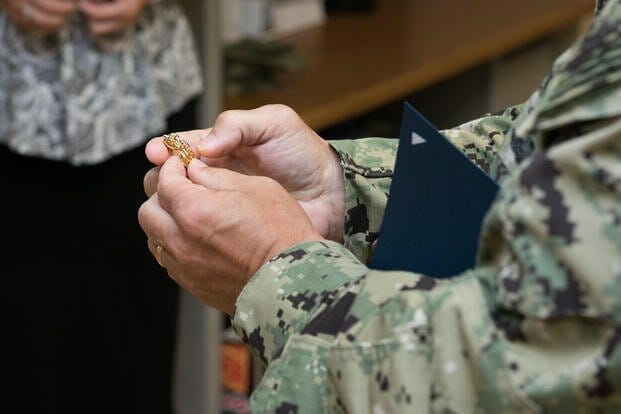 The Navy’s latest efforts to get sailors to head back to sea are focused on senior enlisted members. The sea service rolled out a new program Friday that offers promotions to senior and master chief petty officers in exchange for orders to specific ships — like the USS George Washington.

According to a spokeswoman from the Navy’s personnel office, while programs like this are being rolled out to deal with shortfalls in manning, they also signal the future of how the service hopes to promote sailors and staff its ships.

The latest program, which the Navy is calling Senior Enlisted Advance to Position, or SEA2P, is “designed to keep deploying units mission-ready by aggressively filling critical at-sea leadership billets,” according to the message that announced its creation. It will allow chief petty officers who are eligible for promotion to either senior chief or master chief to agree to orders on ships with the Nimitz Strike Group, stationed on the West Coast, or the Bataan Amphibious Ready Group on the East Coast in exchange for a guaranteed advancement.

The message notes that, in addition to the two, broad groups that are participating in the program, the pilot also will specifically include the USS George Washington. The aircraft carrier’s inclusion by name is notable because the ship has received significant coverage over a string of suicides that has occurred there in the last year, as well as the tough living conditions sailors have reported having to endure.

Since Military.com broke the story of the suicides on the aircraft carrier, the Navy has taken steps to improve quality of life aboard the George Washington, including allowing sailors to move off ship while it’s undergoing repairs, and several sailors have since said conditions have improved. However, its inclusion in this incentive program suggests that the Navy is still having issues staffing the beleaguered ship.

For years, the George Washington has had a reputation among sailors of being a difficult command at which to be stationed. According to those on the crew, the fact that the ship has been in the shipyard for years as part of a complex overhaul and refueling — made worse by growing delays — as well as a recent push to force junior sailors to live aboard the ship have made life much more difficult for sailors.

After news of the suicides broke, Rear Adm. John Meier, commander of Naval Air Force Atlantic, told reporters that, while the ship had about 95% of its junior sailors aboard, it had only about 65% of its senior enlisted.

The new program also underscores the fact that the Navy is having to expend more effort across the fleet to keep ships fully manned and ready to sail.

Lt. Rachel Maul, a spokeswoman for the Chief of Naval Personnel, told Military.com in an email that the two ship groups and the George Washington “were chosen as priority to increase readiness.”

“Closing gaps at sea is a Chief of Naval Personnel priority, and teams are using all available options,” she added.

All told, the Navy is looking to fill about 75 senior chief and master chief spots in the first round of the new pilot program, Maul said, noting that the second round will be determined after selections are made in this initial batch.

The new initiative also follows the rollout of a similar program — the Detailing Marketplace Assignment Policy, or DMAP — that rewards junior sailors in key jobs for staying at sea with more pay and promotions.

Maul explained that “billet-based advancement programs” like SEA2P and DMAP likely signal the Navy’s future rather than a temporary measure to deal with current shortfalls.

“The Navy’s enlisted advancement systems are not currently aligned with the Navy’s distribution systems,” which, according to Maul, leads to senior sailors filling jobs meant for more junior sailors and, in turn, leaving spots meant for them unfilled.

“In time, billet-based advancement is expected to become the standard for all enlisted Sailors in the Navy,” she said. This would move sailors away from the current system that revolves around a biannual exam and evaluations to determine eligibility for promotion.

These measures are the latest in a series of programs aimed at keeping sailors at sea. The Navy has also offered money to sailors to stay at forward-deployed locations and, more recently, to fight shortages in manning caused by COVID-19.