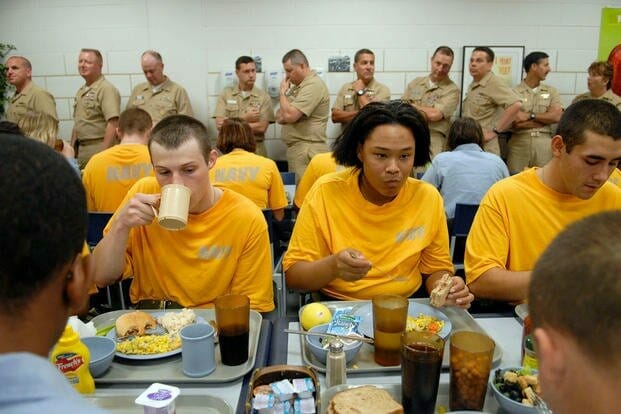 Options for vegan meat substitutes could be coming to Navy chow halls overseas under a pilot program recently advanced by House lawmakers.

As part of the annual defense policy bill the House approved last week, the service would have to run a three-year pilot program to “offer plant-based protein options at forward operating bases for consumption by members of the Navy.”

At least two facilities would have to participate in the pilot. The Navy would still be allowed to offer sailors at those bases the option to eat meat, according to the bill.

The amendment, offered by Rep. Elissa Slotkin, D-Mich., was approved by voice vote without debate when the House Armed Services Committee considered the bill last month.

Last year’s initial House NDAA had a similar measure, also sponsored by Slotkin, but it was taken out of the version of the bill signed into law after negotiations with the Senate.

In an emailed statement to Military.com, a spokesperson for Slotkin said the measure is meant to give “more food options for our service members who are forward deployed.” The text of the measure also suggests cost concerns are a factor.

The bill stipulates the Navy should choose facilities to run the pilot program based on where “livestock-based protein options may be costly to obtain or store.” It specifically suggests Joint Region Marianas on Guam, the Navy Support Facility at Diego Garcia and U.S. Fleet Activities Sasebo in Japan as options.

At 9.1%, inflation in the United States is at a 40-year high right now, with meat, poultry, fish and egg prices up 11.7% this year compared to last, according to the most recent Consumer Price Index update earlier this month. Just in Guam, prices overall have increased 7.6% this year, with beef prices spiking 34.3%, according to the territory’s Bureau of Statistics and Plans.

At the end of the three-year trial run, the Navy would have to come back to Congress to report on the cost of the plant-based protein versus meat and how popular the plant-based option was among sailors.

While the idea elicited no controversy in the committee last month, far-right lawmakers have since glommed onto it as a reason they are opposing the NDAA as whole, citing it as one of the “woke” and “leftist” provisions of the bill.

“As if recruitment isn’t hard enough right now getting young people to join our woke military requiring vaccines, the Navy is going to have it extra hard bc apparently Bill Gates is designing the menu,” tweeted Rep. Marjorie Taylor Greene, R-Ga., referring to the Microsoft founder who has invested in several plant-based protein companies and is often the target of far-right conspiracy theories.

Slotkin’s spokesperson, Austin Cook, shot back that “anyone who would hold up the bill that pays our men and women in uniform over this issue needs to rethink their priorities, and anyone trying to start a culture war over this has too much time on their hands.”

The proposal comes as other branches of the military have been expanding vegan options in their dining halls. Earlier this year, the Coast Guard won an award from animal rights group People for the Ethical Treatment of Animals for the vegan options at its Training Center Yorktown in Virginia. The group has also highlighted the Guns and Rockets dining facility at the Army’s Fort Sill in Oklahoma for offering troops vegan options at every meal.

Editor’s note: This story has been updated with a statement from Rep. Elissa Slotkin’s spokesperson describing the amendment and responding to criticism of it.