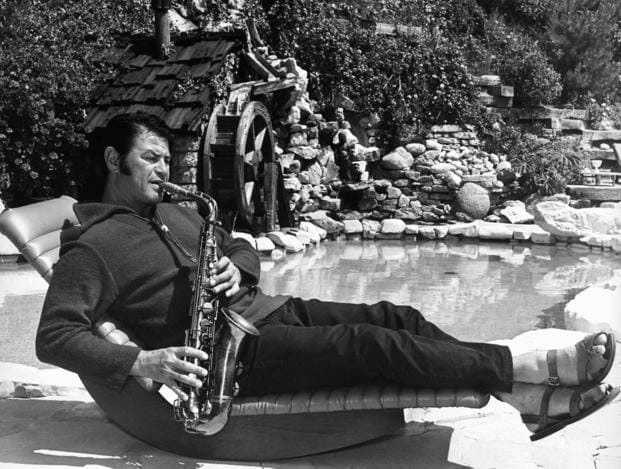 Storch never graduated from DeWitt Clinton High School in the Bronx, so he’s not one of those WWII vets who studied acting on the GI Bill after the war. He worked as a standup comic before breaking in as a guest on various television shows in the 1950s.

Storch didn’t do many movies, but he had memorable turns in “Airport 1975,” “Sex and the Single Girl” (supporting his Navy buddy, Tony Curtis), “The Great Race” (Curtis was a good friend to have) and a memorable turn as a hard-of-hearing customer in “Record City,” a 1977 knockoff of “Car Wash” set in a record store.

Towering above all those credits are two iconic roles that made him a Hollywood legend:

Storch starred alongside fellow WWII vet Forrest Tucker as Sgt. Morgan O’Rourke and Army vet Ken Berry as Capt. Wilton Parmenter in this outrageous comedy series about a remote U.S. Army outpost in the Old West near the end of the Civil War.

O’Rourke and Agarn are involved in an endless series of scams in league with the chief of the local (fictional) Hekawi tribe. Parmenter is a clueless commanding officer who never quite understands the chaos going on around him.

“F Troop” is full of cliched and no-longer-acceptable portrayals of Native American characters who are usually played by white actors, so it’s not likely to be streaming anywhere anytime soon, but the humor in the series didn’t raise any eyebrows when it was aired back in the ’60s. You can watch Storch’s show via DVD or buy it via iTunes.

For “Tennessee Tuxedo,” Storch reunited with his high school friend, Don Adams, who served in the Marines during WWII and fought at the Battle of Guadalcanal. The stakes were much lower for this cartoon series, where Adams voiced Tennessee Tuxedo, a wisecracking penguin who lives at the Megapolis Zoo and has ongoing feuds with the impatient zookeeper, Stanley Livingston, and the desert rodent, Jerboa Jump.

Storch’s character, Phineas J. Whoopee, was created as a direct response to famous 1961 comments by FCC commissioner and WWII Army veteran Newton Minow that television was nothing more than a “vast wasteland.” Whenever Tennessee and his walrus sidekick, Chumley, needed some help with their schemes, they visited Prof. Whoopee who gave them an “educational” speech. Storch’s delivery was far more memorable than any facts he may have tried to impart to the zoo animals.