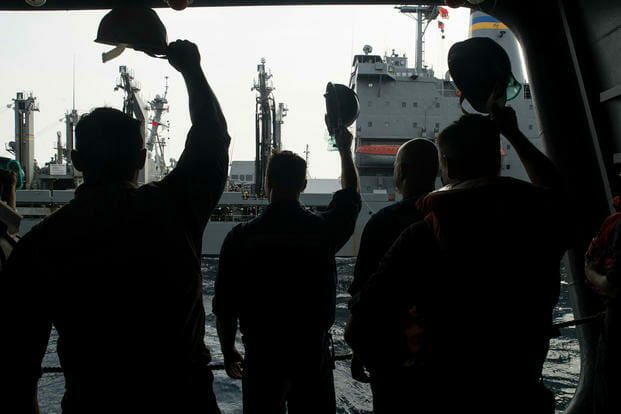 It took the Navy 123 days to get Christopher Atkins his separation orders. While he waited for the paperwork that affirmed what both he and the Navy already knew — that his service was over — his life was put on hold and thousands of dollars of expenses piled up.

As he worked to get the vital documents needed to start his civilian life, Atkins leaned on his chief, who screened his calls; his command master chief, who told him there was nothing to worry about; his executive officer, who tried to help in the span of a short meeting; and finally, a senator’s office.

Three days after Military.com contacted the Navy about this story, Atkins, who had been stationed at Bethesda Naval Hospital outside Washington, D.C., received his orders.

“It just shows that the Navy doesn’t care,” Atkins said. “They failed me; they don’t care that they failed me.”

Atkins is one of around 36,700 sailors who separate from the Navy every year and go through a process that requires a variety of forms, signatures and exams to be done and filed in a specific order. This package of documents and tests — which, as a rule, must be submitted 60 days before a sailor leaves the Navy — is what kick-starts the process to get two crucial items: separation orders and a DD-214, the de facto record the civilian world uses to verify service.

Without this paperwork, sailors cannot do many of the things they need to begin the transition to civilian life — like break leases, schedule moves or apply for benefits — becoming trapped in a limbo of being neither fully a sailor nor a civilian.

According to the Navy, thousands of sailors are facing delays because of held-up paperwork as the service’s personnel offices deal with backlogs. A spokesman for the Navy’s Personnel Command, Cullen James, told Military.com in an email that a variety of factors have caused the backlog, but he placed much of the blame on sailors.

“Currently more than 70% of transactions are being submitted less than 60 days prior to a Sailor’s official separation or retirement date,” James said, noting that “every transaction that is submitted late takes away from transactions that are submitted on time, and puts stress on the entire system.”

Military.com spoke to another sailor, also once stationed at Bethesda, who described a similar wait and issues with having documents submitted accurately and quickly. In her case, the separation documents were all submitted to the command in November in advance of terminal leave set to start at the end of March. She says it took her 121 days to receive orders, and she considers herself fortunate since they came through while she was still being paid. Her DD-214 came almost two weeks after she was discharged.

“I think the only thing that saved me was submitting so early,” she told Military.com.

Social media is also rife with accounts of sailors describing long waits for discharge paperwork and nerve-wracking and potentially debilitating bills piling up.

But for sailors like Atkins, jumping through all the hoops to hit that 60-day mark may not always be possible. The now-former sailor and corpsman began the process as soon as he could by setting up his discharge health appointment months before he was set to leave.

In fact, everything seemed on track until he realized a key form — a separation questionnaire — required a signature from a doctor.

“No one gives you that information that you need a medical signature,” Atkins explained before adding, “You can’t get appointments.”

He tried taking sick time to get to the doctor, but they couldn’t accommodate him at either of the massive Bethesda Naval Hospital, where he worked, or Walter Reed medical facilities.

Making matters worse, once he got the appointment, and the signature, his command sat on the paperwork for several days before filing, shaving off more precious time.

Ultimately, Atkins submitted all his paperwork not 60 days prior to his separation like the Navy suggests, but 41 days.

According to the Navy, there hasn’t been a jump in the number of sailors leaving the service this year, and “there are no known issues with the software systems we use,” James said.

When pressed on cases like Atkins’ where the process is held up by delays with the chain of command or specific appointments, James acknowledged that “separations and retirements can be complex transactions.”

The Navy has spent years trying to fix its outdated and fragmented pay and personnel management systems, with mixed results. In 2017, the Navy began to consolidate its old personnel support and customer support detachments into a single command — MyNavy Career Center or MNCC.

The process has been rocky. A 2021 navy administrative message announced that the service had “noticed an unforeseen fracture of accountability that has developed between the Fleet and the processors” at the support centers. The message also noted that one key component that needed improvement was the performance of “Command Pay and Personnel Administrators” or CPPAs — the staff that serves as the link between individual sailors and the Navy’s human resources system.

In the same year, Military.com also reported that MNCC was undermanned and causing months-long delays in pay for sailors. Other sailors posting on social media at the time reported it took more than a year to see their issues fixed.

The news magazine Coffee or Die recently reported that officers are also facing a serious backlog in getting their DD-214 paperwork.

Despite his own delay, though, Atkins thought he would still see his paperwork before his formal discharge. He figured that since he was given permission to take almost two months of terminal leave — a month more than the Navy typically allows — that would be enough time for the service to get him his paperwork.

Atkins, with his paperwork finally submitted, went on terminal leave April 11. He did so without formal separation orders or a DD-214 — an apparent violation of the Navy’s own policy.

Lacking this paperwork, Atkins began to stress because he was still paying money — $2,300 a month — to live in a townhouse he no longer needed and was unable to move to another state, where he planned to begin his civilian life.

Atkins had been calling his chief petty officer weekly, but he couldn’t get the phone picked up.

By May 12, Atkins grew frustrated by the lack of progress. His leave half gone, he met with the command’s top enlisted leader, Master Chief Josina Cato, and the executive officer, Capt. Anthony Keller.

In that meeting with Keller, Atkins remembered that Cato dismissed his concerns about the lack of orders or DD-214 paperwork by noting he was still drawing a paycheck on terminal leave. But he was quick to add that Keller pushed back and made several phone calls on his behalf.

That still didn’t solve the issue and, in early June, Atkins’ terminal leave, and pay, ran out. He was still in his townhouse, unable to get out of the lease. His household goods were still in place, and his family resorted to making car trips to his in-laws’ house to at least get his wife ready to work following her maternity leave. Meanwhile, Atkins was unable to start the process of applying for professional certification in the state where he was ultimately planning to work.

Atkins, who plans to move to Pennsylvania, reached out to the office of Sen. Pat Toomey, R-Pa., for help and, eventually, Military.com. When Military.com asked the Navy about the issues Atkins described, a spokesman from the personnel office asked for the now-discharged sailor’s information. After receiving permission from Atkins to share his name, the former sailor received his separation orders two days later.

“It’s four months of rent that the Navy made me pay,” Atkins explained, since his original plan had been to break the lease as soon as he went on leave.

“I would have saved money if I just didn’t trust the Navy and just cut it as a loss,” he added, referring to the clause in most leases that allows a tenant to cancel with a cost penalty.

All told, Atkins had to pay four months more rent than he’d planned for because of the delays, and he noted that there were other unnecessary costs, like the electric bills supporting air conditioning in the middle of a hot mid-Atlantic summer and the expense of moving household goods in his car, across state lines, amid a historic surge in gas prices.

“Good thing we are financially responsible. … I know E-5s that are paycheck to paycheck.”

When asked why so many sailors — 70% fleet-wide, according to the Navy’s estimates — submit their paperwork late, James, the Navy spokesman, said that “there is a lack of Personnel/Pay knowledge, expertise, and lack of communication among the Command Pay and Personnel Administrators (CPPA), their command triads, and the Fleet as a whole.”

He added that the Navy plans to do training for all sailors in early August “in order to standardize the CPPA foundational knowledge in the fleet on complex transactions, such as separations and retirements.”

Atkins is still waiting for his DD-214 — the form that attests to his service and discharge — despite being out of the Navy for more than a month, and the thousands of dollars in extra bills have cut into his savings.

“I still don’t have a good transition,” Atkins explained. “So I’m not gonna be working, and I can’t file for unemployment.”

Related: ‘Bad Paper’ Discharges of Some Marines and Sailors to Get Second Look