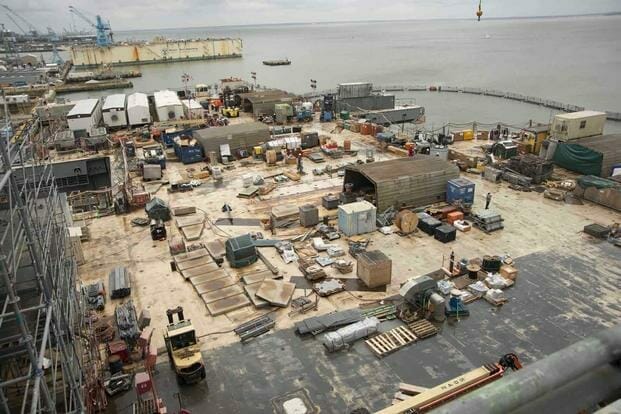 Congress is increasing pressure on the U.S. Navy to make changes to the environment sailors face when the ship they are assigned to is undergoing long periods of shipyard work.

Responding to the details revealed in the recently released investigation into three suicides aboard the aircraft carrier USS George Washington, Sens. Chris Murphy and Richard Blumenthal, both D-Conn., announced Thursday that they have written to Secretary of the Navy Carlos Del Toro to demand change.

“The senators are calling on the Navy to go further than the recommendations made in the investigation report released last month and to reform requirements governing the shipyard lives of sailors,” a staffer for Murphy’s office said in an email to Military.com.

In their letter, the senators noted that “Master of Arms Seaman Recruit Xavier Mitchell-Sandor’s decision to take his own life was not the result of a single failure, but a cascading series of events that forced a young man to believe he had no way out.” The young sailor was from Connecticut and would frequently drive there from Virginia to escape his life on the ship.

“His death is a tragedy, but there were multiple mistakes made by the USS George Washington’s leadership and warnings that could and should have prevented it,” the senators went on.

The letter highlights both the hazardous and noisy living conditions on the ship, as well as a struggle to access mental health care and help — something the Navy’s investigation detailed.

Since first revealing a string of suicides aboard the aircraft carrier last April, Military.com has confirmed at least six suicides by sailors assigned to the ship in under a year, and nine in total since November 2019. The Navy has disputed the cause of death for one of those sailors.

“It is completely intolerable for the Navy to place sailors onboard a ship with these conditions and tremendous barriers to accessing care and support,” the letter said. “The Navy must immediately reform regulations to establish unwaivable requirements for manning, screening, and access to mental health care during long periods of shipyard maintenance.”

The pressure from Congress following the suicides aboard the George Washington over living conditions for sailors in shipyards is not new. Shortly after the news of the deaths broke, then-Rep. Elaine Luria, D-Va., toured the ship and spoke with the crew.

In speaking to the press in May, Luria said that the admiral who oversees ships in the Atlantic told her that while Navy leaders are “very good … once there is a problem identified finding solutions and corrective actions … they are not always as proactive in certain circumstances in identifying problems before an incident of some type happens.”

She likened that response to other catastrophes like the collisions sustained by the USS McCain and Fitzgerald.

In early December, Sen. Tim Kaine, D-Va., met with the Navy’s top officer, Chief of Naval Operations Adm. Mike Gilday, to discuss, among other things, “the need for more mental health professionals and resources focused on prevention and resiliency,” a staffer said in an email to Military.com at the time.

That meeting came after another cluster of suicides — four at a regional maintenance center in Norfolk, Virginia — came to light.

“It’s clear we must do more to support our service members and improve their access to mental health treatment,” Kaine said in a statement in December.

The recently passed National Defense Authorization Act — the annual policy bill for the military — included a requirement for an inspector general investigation into suicides in the Navy, travel and transportation allowances for sailors assigned to a ship undergoing nuclear refueling, and a requirement for the Navy to brief congressional committees on the possibility of creating a special stipend for sailors on a ship undergoing a complex overhaul.

So far, the service has largely stood by its efforts to provide reasonable living conditions for sailors.

The Navy’s internal investigation that looked into the three most recent suicides aboard the George Washington found that they had no clear connection to living conditions on the massive docked ship. Another, broader investigation is still ongoing.

In the days after the news of the suicides and living conditions aboard the ship broke, Navy leaders told the crew there was little to be done. Then-Master Chief Petty Officer of the Navy Russell Smith told sailors the Navy “probably could have done better to manage your expectations coming in here” but that “legally and from a safety perspective” the Navy had to move some of the crew onboard the still-gutted ship.

Three days later, the crew began to be moved off.

Smith’s replacement as the Navy’s top enlisted sailor — Master Chief Petty Officer of the Navy James Honea — pledged to focus on sailors’ needs and their families when he took the job in September 2022. Honea has yet to speak to the press about any details relating to those promises.

Meanwhile, Rear Adm. John Meier, the commander of Naval Air Force Atlantic and the man who oversees the George Washington, admitted that some of the conditions reported by sailors ran deeper than just the one carrier or these suicides.

“It is safe to say that generations of Navy leaders had become accustomed to the reduced quality of life in the shipyard, and accepted the status quo as par for the course for shipyard life,” Meier wrote in a statement that accompanied the investigation.

“As officers with no enlisted experience, it is easy to lose sight of how powerless one might feel as the most junior member of a crew. … It appears [Mitchell-Sandor] felt truly alone, and at least onboard the ship, was living all alone,” Meier wrote.

Related: What the Deaths of Sailors Who Took Their Own Lives Aboard the George Washington Reveal About the Navy