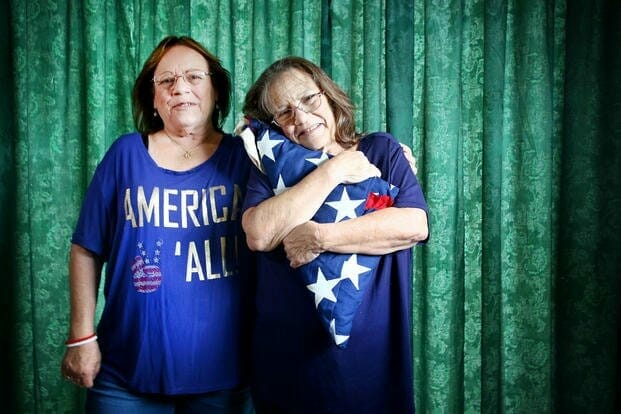 LARGO, Fla. — In August, two sisters stopped by lot 669 of Largo’s Ranchero Village mobile home park hoping to find a toaster oven or maybe a lamp among the items stacked curbside to be taken for free.

They went home with bed linens and a U.S. flag from a 1974 military funeral in Michigan.

They kept the linens but hope to return the flag to the soldier’s family.

“It doesn’t belong to us,” said Lisa Dernoncourt, one of the Largo sisters. “It belongs to the family.”

But, so far, they’ve been unsuccessful in returning it and wonder if they will.

So, out of respect, Dernoncourt’s husband Steve Dernoncourt will build a shadow box that will display the flag in their home.

“He served our country,” she said. “We don’t know him. But that doesn’t matter. He was someone’s son and brother, and he loved our country. That’s enough for me.”

Inside the flag’s fold was the laminated obituary for the deceased, Richard T. Morse, who died in a car accident in Virginia at the age of 18. There was also driver’s license information and condolence letters from the United States Navy to the family.

In September, Dernoncourt reached out to the Tampa Bay Times for help locating the family.

A Ranchero Village front office employee who only identified herself as Sherry said Robert Morse had died and the family placed some of his belongings outside the mobile home to be taken by the community.

She called the Morse family and said they told her that the flag must have been hidden inside a box and they did not see it.

The front office then put Dernoncourt in touch with the Morse family in Michigan. Fearing it could be lost in the mail, she will only directly turn it over to the family. But, four months later, they have yet to connect in person.

“The brother held on to the flag for a long time for a reason,” Dernoncourt said. “It obviously was important to him. He was still missed.”

According to Richard Morse’s obituary, he was born on Dec. 28, 1955, “and had been a resident of Flint most of his life.” He attended Markham Lutheran School in Markham, Illinois, and Northwestern High School in Flint and played little league baseball. He was survived by parents Richard and Dolores Morse, brothers Robert, Ronald and Randall Morse, and grandparents Laura B. Morse and Sarah Stewart, all of Flint at that time.

Military correspondence with the mother identified him as an equipment manager third class with the rank of seaman.

“I deeply regret to confirm on behalf of the United States Navy that your son Seaman Richard Thomas Morse … died on August 9, 1974 in Norfolk, Virginia as result of a single car accident,” a Western Union telegram to his mother from the Navy reads. “Your son died while serving his country.”

He was buried in Evergreen Cemetery in Grand Blanc, Michigan.

A photo on the Find a Grave website shows Richard Morse’s plot next to his father’s. Both their headstones read, “Buddies all the way.” His father, also known as “Pop,” according to the photo, died in 1996.

Dernoncourt and her sister Terri Moore went to lot 669 in response to a post on the Buy Nothing Project app that lists items being given away.

“There was all sorts of good stuff there,” Moore said. “People were taking chairs and stuff like that.”

Dernoncourt grabbed bed linens. Her sister then spotted the flag sitting on top of a pile of trash crammed inside a can.

“We had to grab it,” Moore said. “It didn’t belong there. It’s an American flag. It needs to be respected.”

Once home, they realized it was from a military funeral. They then began seeking out the family.

For Dernoncourt, the flag has a personal connection, she said, because her daughter, Jennifer Nicole Hyde, is currently in Afghanistan as part of The Army Judge Advocate General’s Corps, otherwise known as JAG.

She still hopes to return the flag to the Morse family. But in the meantime, worrying it might be a while and out of honor for Richard Morse’s service to the country, the flag will be displayed in her home.

“Richard Morse was a patriot,” she said. “He deserves to be honored, either in my home or his family’s. I’ll continue to honor him until we can get him home.”

© Copyright 2022 Tampa Bay Times. All rights reserved. This material may not be published, broadcast, rewritten or redistributed.