Taiwan’s Tsai Visits Base as China Protests US Ship Passage 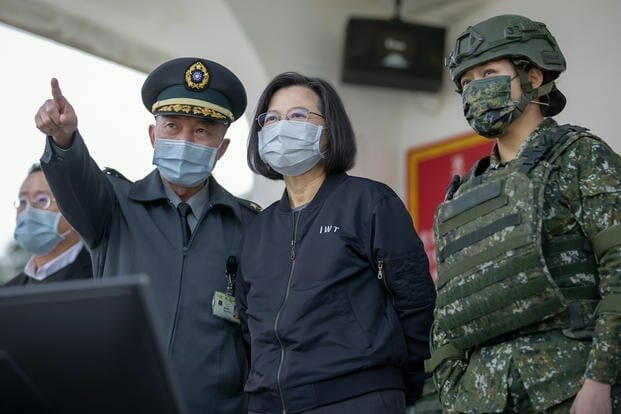 CHIAYI, Taiwan — Taiwanese President Tsai Ing-wen visited a military base Friday to observe drills while rival China protested the passage of a U.S. Navy destroyer through the Taiwan Strait, as tensions between the sides showed no sign of abating in the new year.

Beijing claims self-governing Taiwan as Chinese territory to be brought under its control by force if necessary, and regularly protests the passage of U.S. and other foreign warships through the Taiwan Strait, one of the world’s busiest waterways.

Tsai’s visit to the base in the central county of Chiayi comes as Taiwan is seeking to boost its defenses against the rising threat from China. That includes expanding the domestic shipbuilding and arms industry, buying more defensive weaponry from the U.S. and extending the national service requirement for all men from four months to a full year beginning in 2024.

Along with observing the display by an army mechanized infantry battalion, Tsai visited the air force’s Fourth Tactical Fighter Wing, whose pilots are largely responsible for intercepting Chinese military aircraft approaching the the midline of the Taiwan Strait.

“I would like to reiterate that the continuous activities of the People’s Liberation Army (around Taiwan) are not helpful to cross-strait relations nor to the peace and stability of the region,” Tsai said.

“As we are facing the expansion of authoritarianism, we can only but strengthen the country’s combat capabilities and toughness to secure our national security and interests,” said Tsai.

Meanwhile, China accused the U.S. of “publicly hyping” the passage Thursday of the Arleigh Burke-class guided-missile destroyer USS Chung-Hoon through the strait, adding that its forces monitored the ship the entire time.

“The Eastern Theater Command of the Chinese People’s Liberation Army organized troops to monitor the U.S. ship’s entire passage and was fully cognizant of all its actions,” the command’s spokesperson Col. Shi Yi said in a brief statement posted to social media.

The U.S. says the strait is international waters beyond the territorial sea of any coastal state.

China’s attempts to intimidate Taiwan militarily have risen to new heights in recent months, raising concerns in Washington that Beijing is growing closer to using force. That has included firing missiles into the sea and sending planes and ships across the dividing line in the Taiwan Strait in August in response to a visit to the island by U.S. House Speaker Nancy Pelosi.

Last month, it sent a record-breaking 71 planes and seven ships toward Taiwan in a 24-hour display of force after expressing anger at Taiwan-related provisions in a U.S. annual defense spending bill.