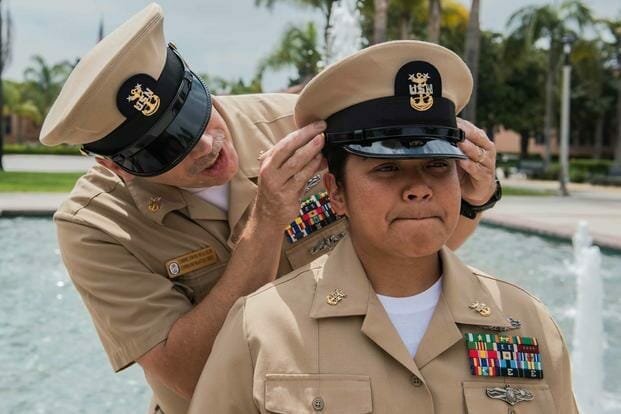 The Navy is changing the way it promotes sailors into the top enlisted rank — master chief petty officer — and leaders in the service say that it’s only the beginning of a major initiative to revamp how the service promotes across the ranks.

At the moment, master chiefs and other chief petty officers in the Navy are promoted in a process where a board reviews all eligible sailors and decides who to promote completely independent of the sailor’s command or future assignments.

The new process, which the Navy calls “Billet Based Advancement,” will tie those two factors — promotion and new orders — together. Navy officials say the change will not only benefit the service by getting higher-ranking sailors into matching jobs more quickly, it will give sailors more control and transparency over their careers.

Read Next: A Year After Red Hill Crisis, Navy to Open Hawaii Clinic Amid Claims of Long-Term Health Problems

Starting in 2023, senior chiefs who are eligible for promotion will now be “screened,” and the sailors deemed the “best and fully qualified” will become eligible to participate in a marketplace of available master chief positions throughout the Navy, a press release said. If they are picked for a position, the promotion to master chief will happen as soon as they report to their new post.

“This is a fundamental shift in how we do business with respect to enlisted advancement,” Rear Adm. Jim Waters told reporters in a call ahead Monday. “We think this process better aligns sailor talent with unit job requirements and seeks to advance sailors who are committed to staying Navy.”

Waters explained that under the new process, after a current senior chief is screened, they will have 24 months to enter one of the MyNavy assignments cycles — one every February, April, August, October and December for a total of 10.

That two-year window to pick new orders is a key selling point of the new approach, according to the Navy.

“Some sailors will get that screening status and be like, ‘OK, I’m ready, send me in, coach,'” Waters said. Meanwhile, the admiral also noted that the system doesn’t penalize a sailor’s promotion if they think “‘I just need 12 more months, for my daughter to finish high school’ … or they want to look at the marketplace for a longer period of time to expand the aperture of opportunity to stay in that same location.”

Once screened, would-be master chiefs will be able to apply for the jobs that interest them, and then detailers will work to make the best matches.

Another new element that the Navy is adding to the mix is “Merit Reorder.” Borrowed from officer promotion boards, the screening board can reshuffle up to 15% of the candidates’ rankings and designate “Merit Priority Sailors,” who are given higher priority in picking new orders and “100% detailer contact,” which means their detailer will call if the sailor is not selected for one of their top two preferences and help find a new match.

The Navy’s official message on the new policy notes that some communities — the command senior enlisted leader program, the submarine force, the surface nuclear program, musicians, the Naval Special Warfare community, and sailors in the reserves — will stick to the old system.

Waters hopes that the new system will contribute “to an increased amount of control that the sailor has in their career progression because they have the ability to be identified for advancement and then make a choice as to where and when they go to be advanced while, at the same time, the Navy gets some incentive to fill those billets.”

The service is planning to roll out the same promotion system for most sailors in the future, though for many junior sailors the options for advancement are more likely to include posts in their current command.

Some versions of that approach are already in place. In December 2021, the Navy announced a program called the Detailing Marketplace Assignment Policy, or DMAP, which gives sailors in four sea-intensive jobs the opportunity to volunteer for more time at sea in exchange for extra incentive pay, a promotion to E-5, and priority for orders for a shore-duty assignment after their time at sea.

Although these smaller programs clearly incentivize sailors to take orders on ships, Navy leaders say the massive revamp is not about solving that problem. While the service admits it currently has about 9,000 empty spots on ships, Navy spokeswoman Lt. Rachel Maul said that “it’s also important to note that looking at the number itself doesn’t tell the full story.”

Maul pointed out that the Navy has 94% of all its ship jobs filled, which puts the service “within historical norms.

Also, Vice Adm. Richard Cheeseman, the Navy’s chief of personnel, said in a press release on the revamp that they’re looking to fix the problem of not getting newly promoted sailors into jobs that match their rank fast enough, which leads to “chronic misalignments between available talent and unit-level job requirements.”

One detail that will not change, however, is the Navy’s unique ritualized induction into the rank of chief petty officer that occurs over six weeks once a year. Fleet Master Chief Delbert Terrell Jr., who was on the press call with Waters, said that, while the changes to how sailors are being promoted into the Chief’s Mess are “being discussed amongst the fleet … we will be prepared to ensure that we keep that aligned in recognizing and putting anchors on our new chief petty officers.”

“We’re committed to that culture of a major shift from being an E-6 to being a chief petty officer — we will incorporate [it] into any version of the senior enlisted marketplace that we develop,” Waters said.

Related: Navy Will Offer Chiefs Promotions to Go to Sea — or the George Washington — in New Program