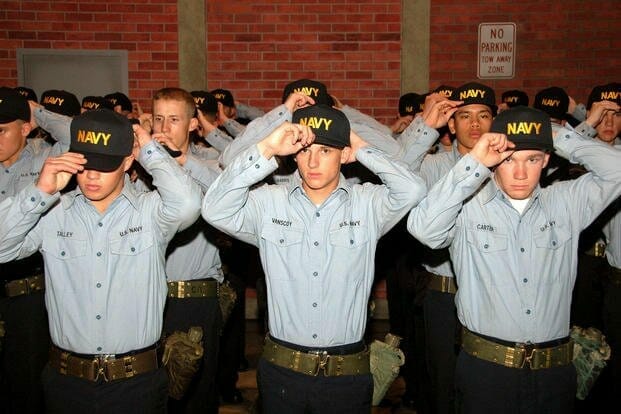 The Navy is offering potential recruits a new, eye-watering figure in exchange for joining its ranks: $115,000 in possible bonuses and loan repayment.

In a press release issued Saturday, the Navy announced that it is topping its already historically high $50,000 signing bonus, with the possibility of earning up to $65,000 in loan repayment as well.

Rear Adm. Lex Walker, head of Navy Recruiting Command, emphasized in the release that the two numbers are “not mutually exclusive, so if a Future Sailor maximizes both, that adds up to a life-altering $115,000, and the opportunity to serve in the world’s finest Navy.”

There are, naturally, a few conditions that apply. For starters, the signing bonus is a maximum of $50,000 that requires enlisting in specific jobs and agreeing to ship out to boot camp quickly. The biggest bonuses are still for sailors who are eligible and interested in becoming part of the Navy’s nuclear power program — $38,000 just for the job. On top of that, you can layer more money to ship out quickly.

The Navy is offering $10,000 for a recruit in any job who is willing to go to boot camp between now and the end of September. Some jobs, however, see that bonus rise to $25,000.

The $65,000 loan repayment bonus has far fewer conditions. According to the latest Navy instruction, that offer is on the table for any job and regardless of when you ship out.

Under this latest offering, the Navy is also encouraging younger recruits who may not have loans, like high school seniors, to consider signing up by offering $10,000 just for entering the delayed-entry program by Oct. 31, 2022, with the condition that the recruit has to graduate from high school prior to shipping out in July 2023.

However, the Navy is also taking a relatively novel approach and speaking to former sailors and other enlisted veterans who are considering coming back to military service. The press release specifically notes that returning veterans are eligible for many of these bonuses as long as they come in at the rank of E-4 or below and did not receive a bonus in their first enlistment.

“If you are a Sailor, Marine, Airman, Soldier, Guardian, or Coast-Guardsman who recently separated, this is an opportunity without precedent,” Walker noted in the release.

The statement also said that veterans of any branch would go through only a “three week Naval Orientation Course” at the Navy’s boot camp facility at Great Lakes, Illinois, while former Navy veterans would be required to do even less — just “in-processing.”

Cmdr. Dave Benham, a spokesman for the Navy’s Recruiting Command, explained that the high bonuses persist because the sea service recognizes “that young Americans today have more employment options and opportunities than ever before.”

“We are offering record high enlistment bonuses to be competitive with the strong civilian labor market, recognizing that we are in competition for the best and the brightest young Americans from all walks of life,” Benham added.

The high totals also reflect that the Navy, like all the branches, is struggling to attract recruits. In addition to the unprecedented bonuses, the service has instituted programs that tempt sailors near the end of their enlistment to keep serving longer, offer money to stay at forward-deployed locations, and, most recently, give promotions to senior enlisted to take orders to certain ships.

Related: Navy Will Offer Chiefs Promotions to Go to Sea — or the George Washington — in New Program