This ‘Top Gun: Maverick’ Trailer Is a Powerful Love Letter to Naval Aviation 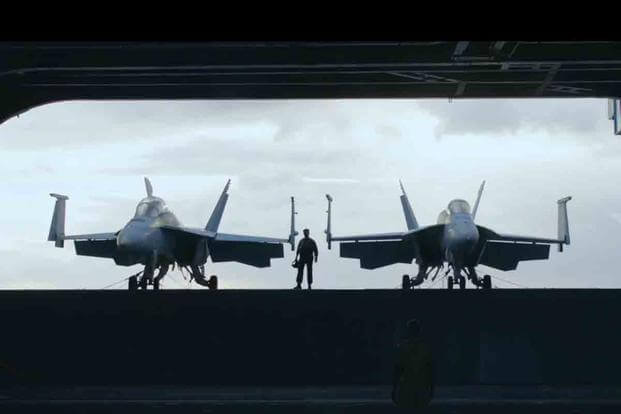 Being an actor who signs on to do a movie with Tom Cruise usually means there are going to be some stunts involved. The actors in the new “Top Gun” movie knew they would be going up in naval aircraft.

That meant flying in one of the U.S. Navy’s premier multirole fighters, the F/A-18 Super Hornet. Along with its successful operational history, it’s also the aircraft used by the Navy’s Flight Demonstration Squadron, the Blue Angels, so there’s a lot to celebrate about the aircraft.

A new video produced by Paramount Pictures for “Top Gun: Maverick” does just that, highlighting naval aircraft and naval aviation while celebrating the Super Hornet.

“I told everyone, ‘If you’re gonna take this role, part of it is being in an F/A-18,” Cruise says in the Paramount trailer. “I don’t know how to do it any other way.”

The video, released May 26, 2022, features the cast of “Top Gun: Maverick” talking about their first impressions of flying in the movie’s featured aircraft, the Super Hornet. It also offers cockpit video of the actors in-flight — and at least one actor, Greg Tarzan Davis as Lt. Javy “Coyote” Machado, passing out.

“One of my favorite analogies that some of the TOPGUN pilots have: It’s like being strapped onto a dragon,” says actor Lewis Pullman, who plays Lt. Robert “Bob” Floyd.

The actors did not fly the aircraft but delivered their lines from the cockpits of F/A-18F fighters in flight. Even Cruise, who is famous for doing his own stunts and is a certified pilot, wasn’t allowed to actually fly the aircraft. He did get the naval aviators at the controls to do some wild things.

The movie’s naval aviation technical adviser, Capt. Brian “Ferg” Ferguson, says audiences may find some of the stunts so real that it might be hard to believe actors really did it.

“Tom said, ‘I need this to happen at 30 feet above the ground,'” says Ferguson, referring to one scene in particular. “He was doing 480 knots, basically a 500-mph race car. I’ve been doing this in these airplanes for a long time, and I watched that and go, ‘Wow, that’s fantastic.'”

This small vignette displays what the Super Hornet can do for the reel world, but the real-world history of the aircraft is just as impressive.

First introduced in 1999, the F/A-18F Super Hornet is a two-seater, twin-engine fighter capable of flying at Mach 1.6. It was also the fighter that replaced the F-14 Tomcat — the featured aircraft in the original 1986 film, “Top Gun” — in the Navy’s arsenal.

Outside of Hollywood, the F/A-18 has seen action in Operations Enduring Freedom and Iraqi Freedom, anti-piracy operations along the Horn of Africa, and against Islamic State targets in northern Iraq in 2014.

In 2017, an American F/A-18 pilot shot down a Syrian Su-22 fighter as it attacked a U.S.-backed Syrian Democratic Forces (SDF) position in Syria. It was the first air-to-air victory over a manned aircraft by an American fighter since 1999, the first by the Navy since the Gulf War in 1991 and the first aerial victory by a Super Hornet.

“I wanted to celebrate the fighter pilot,” says Cruise.

Even if you’re not a naval aviator flying F/A-18s, you can still join the celebration. “Top Gun: Maverick” is in theaters now.

— Blake Stilwell can be reached at blake.stilwell@military.com. He can also be found on Twitter @blakestilwell or on Facebook.

Whether you’re thinking of joining the military, looking for post-military careers or keeping up with military life and benefits, Military.com has you covered. Subscribe to Military.com to have military news, updates and resources delivered directly to your inbox.