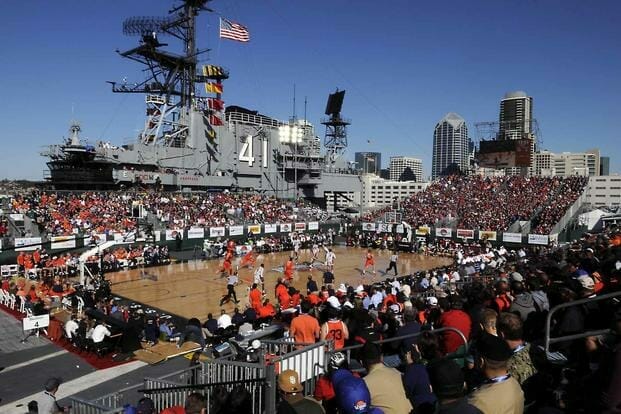 Who expected to sea this again?

A pair of national college basketball powers will meet on the flight deck of an aircraft carrier in San Diego. Gonzaga and Michigan State will meet Veterans Day on the aircraft carrier Abraham Lincoln stationed at Naval Air Station North Island.

The concept came and went a decade ago, mothballed after four games (two in San Diego) were overwhelmed by the elements, wet courts that made footing treacherous or windy conditions that made 3-point shots look like knuckleballs.

The contest is to be confirmed today in a joint announcement by the schools and ESPN Events, which will host the game.

The 2022 Armed Forces Classic game Nov. 11 will be televised in prime time on ESPN.

“The opportunity to honor the men and women of the military and thank them for what they do always creates a nice backdrop for Veterans Day and that weekend,” said Clint Overby, ESPN Events vice president. “We’re really excited and, frankly, honored to be doing it.

Tipoff will coincide with the 33rd anniversary of when the Abraham Lincoln was commissioned. The aircraft carrier has been based in San Diego the past three years.

The Abraham Lincoln was deployed in January and is currently in Hawaii participating in the Rim of the Pacific maritime exercise, which runs through Aug. 4. It is scheduled to return to its home port at NAS North Island by the fall.

“Those who serve, and who have served, know that the military is the ultimate team sport,” Vice Adm. Kenneth Whitesell, Commander, Naval Air Forces, said in a statement. “I can think of no better way to salute our men and women in uniform than to celebrate this all-American pastime together on one of our nation’s capital warships.”

Logistics are still being determined, including spectator capacity for the event. Overby said it will be less than the 8,000-plus seats set up for the 2011 Carrier Classic game played in San Diego on the aircraft carrier Carl Vinson.

There will be no tickets for the general public, with seating limited to invited military members and some team allotments.

Plenty of planning will center on contingency plans in the event of weather issues.

“Certainly, there will be a Plan B that we will outline at a later date,” Overby said. “We’re working through that with the schools right now with respect to what Plan B looks like in the event of high winds, rain, precipitation or whatever.”

ESPN Events created the Armed Forces Classic in 2012, though the previous eight events (it was canceled the past two years due to the pandemic) all have been staged at U.S. bases located domestically and abroad in Germany, Japan and South Korea.

Could a backup court be set up on a local base?

“I wouldn’t rule out any particular venue, quite frankly,” said Overby, adding, “Anytime you’re outside you’re dealing with unknowns. No matter how good the predictive models are, there is some uncertainty you have to contend with.

“The good news is that both coaches and their administrations and athletes feel confident about the opportunity and want to proceed. They understand the disruptions that could exist. In light of all that, I think this is a really good opportunity and the schools feel the same.”

The game also was on Veterans Day, in that instance because tipoff was postponed two days because of wet weather in the forecast.

When the teams did take the court, the windy conditions were at least in part responsible for SDSU’s 1-for-18 3-point shooting performance against the Orange.

Two other carrier games scheduled that year, both on the East Coast, were canceled (one of them at halftime) when condensation formed on the courts and made playing conditions dangerous.

On Veterans Day a year earlier — 11-11-11 — Michigan State defeated North Carolina 67-55 in San Diego on the flight deck of the Carl Vinson.

Organizers planned to construct a second court below deck as a contingency, but abandoned those plans in mid-week, rolling the dice that the weather would cooperate.

It did — although rain arrived only an hour after the final buzzer.

Gathering clouds made for a beautiful sunset, providing the backdrop for a surreal setting. The crowd of 8,111, most of them military members, watched from temporary stands on a ship that six months earlier had transported the body of Osama Bin Laden for burial at sea.

President Obama spoke briefly before taking a seat at center court for the 2011 event on the Carl Vinson.

Michigan State alum Magic Johnson was the honorary captain for the Spartans. UNC alum James Worthy represented the Tar Heels, stepping in because Michael Jordan had a prior commitment.

Michigan State head coach Tom Izzo was a driving force, then and now. In a statement, Izzo said the event will be an experience the players remember “for a long, long time.”

“I said at the time in 2011 when we played North Carolina on the deck of the USS Carl Vinson, one of the most humbling experiences of my career,” Izzo said. “And I’ll say it again, we’re going to play one of the top teams in the country and we’re going to be hosted by the No. 1 team in the world.”

Gonzaga was seeded No. 1 overall in the 2022 NCAA men’s basketball tournament, losing 74-68 to Arkansas in the Sweet 16.

Michigan State was a seventh seed in the same Western Region, falling 85-76 to Duke in the second round.

“I give both of these coaches credit, as well as the other coaches who have come through the Armed Forces Classic over the years,” Overby said. “There’s a higher purpose here.

“The opportunity to be in front of a mostly military crowd and participate in activities in the base setting, and get a look at life beyond what their life is like, is something that’s important.”