Were Dangerous ‘Forever Chemicals’ Released in the Red Hill Fuel Spill? The US Navy Isn’t Saying 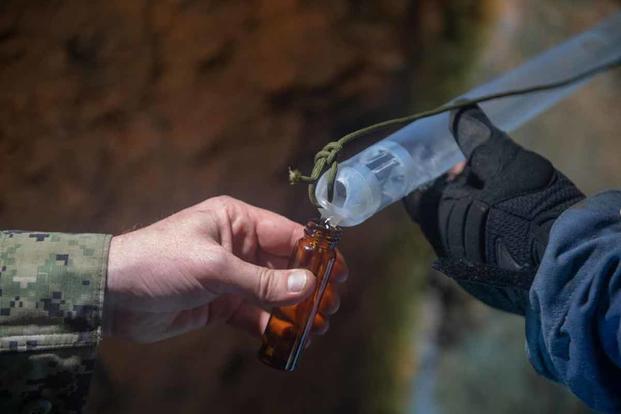 When fuel spilled from the Navy’s Red Hill facility in Hawaii and tainted the drinking water for thousands of military homes in Hawaii, it sickened families and forced thousands to evacuate. But did that fuel carry other harmful toxins into people’s homes in the form of so-called forever chemicals?

If it did, the Navy is not saying.

The Navy’s official report on the 2021 spill found that, after the fuel escaped, it sat in a fire suppression system line for months, the kind of line that typically contains chemicals used in firefighting foams.

Some of those chemicals, dubbed “forever chemicals” because they do not break down and formally known as PFAS, are a collection of nearly 9,000 compounds that have commercial and industrial use. But they also can accumulate in the body and have been linked to infertility, some types of cancer and birth defects.

During a House hearing July 19, Rep. Kaiali’i Kahele, D-Hawaii, asked a Navy official about the potential for contamination with per- and poly-fluoroalkyl substances, or PFAS, as a result of the fuel leak into the Navy’s water system at Joint Base Pearl Harbor-Hickam.

Kahele said that he has “continuously” asked the Navy the question since the spill.

“I wanted to ask it again if you had any information to confirm that the release from the broken [aqueous film forming foam, AFFF] line contained only a mixture of fuel and water, petroleum product, but did not contain any type of fire retardant such as PFAS?” Kahele asked during the House Armed Services Readiness Subcommittee hearing.

Vice Adm. Randy Crites, deputy chief of naval operations for capabilities and resources, replied that he didn’t know and would get back to Kahele.

But as of Thursday, Kahele’s staff could not confirm whether the Navy had responded.

Navy officials also did not respond by publication to a question from Military.com about whether the service thought there were PFAS in the contaminated water.

In November, the Navy’s World War II-era Red Hill Bulk Fuel Storage Facility accidentally released thousands of gallons of fuel and water into a tunnel that houses a fire suppression system drain line, resulting in the contamination of a nearby drinking water well that serves Pearl Harbor.

The spill sickened hundreds of military families living on or near the installation, forcing them to rely solely on bottled water in their homes or to live in hotels for several months while the Navy worked to flush the lines and restore safe drinking water.

Given that the fuel that leaked into the Navy’s water system near Red Hill in November had been contained in a line meant to carry PFAS-containing firefighting foam, contamination would seem likely.

But the facility’s main fire suppression system line was not fully functional, with its AFFF fire suppression system disabled for at least a year, according to documents obtained through the Freedom of Information Act by the Hawaii media outlet Civil Beat, leaving the possibility of additional contamination with PFAS uncertain.

During an inspection in early November 2021, the Occupational Safety and Health Administration determined that the system was capable only of deploying water in the event of a fire. The AFFF fire suppression system had been intentionally disabled following an “unknown mechanical failure” that raised concerns that it could potentially pollute the environment, according to OSHA documents.

The AFFF lines had been drained and its valves locked, according to the inspectors. The lines did contain PFAS at some point, as indicated by the leak that caused the Navy to disable the automatic system. But whether residual foam or PFAS remained in the system has not been determined.

A Navy engineer escorting the inspectors said he was not aware that the system had been disabled and was under the impression that the system was in “manual” mode, meaning the lines did not contain firefighting foam but could be activated by an employee in the event of a fire.

As a result of that inspection, OSHA served the Navy with two violations of workplace safety standards, to include failing to maintain an adequate fire safety system and not telling employees about the risk.

“Although the water suppression capability was fully functional, and would activate automatically as designed if a fire were detected, activation of the Aqueous Film Forming Foam (AFFF) supply to the system was in manual vice automatic mode,” wrote Rear Adm. Timothy Kott, commander of Navy Region Hawaii, in a letter to OSHA on April 21, 2022.

The Navy agreed to put up signs warning employees that the AFFF system was in manual mode and added that a watchstander be posted in the system’s pump house to activate the foam response as necessary.

“Additionally, action is being taken to return the AFFF supply portion of the system to full automatic mode by the end of the month,” Kott wrote.

In its investigation of a spill that took place on May 6, 2021, dumping fuel into the fire suppression line, and the subsequent Nov. 20 spill that polluted the base drinking water supply, the Navy also said the AFFF used at Red Hill met military specifications established in 2017 that required significantly reduced levels of two chemicals, PFOS and PFOA.

“Due to the age of the Red Hill AFFF system, it has only ever contained this new formulation,” they wrote in the investigation.

Tests done on the water following the November spill did not appear to measure for PFAS. The base itself is a known PFAS-contamination site as a result of long-term use of AFFF, according to the Environmental Working Group, a watchdog nonprofit that monitors PFAS sites nationwide.

The Environmental Protection Agency said in June that no amount of PFAS exposure is safe and could cause health problems at “near zero and below EPA’s ability to detect at this time.”

During the hearing, Kahele said he remains concerned.

“Ensuring that PFAS, which is a very, very dangerous chemical, obviously known to cause cancer, was not in that pipe and did not enter the Red Hill well and, ultimately, was not consumed by our military service members and their families, it’s really, really important for those families to know that,” Kahele said.