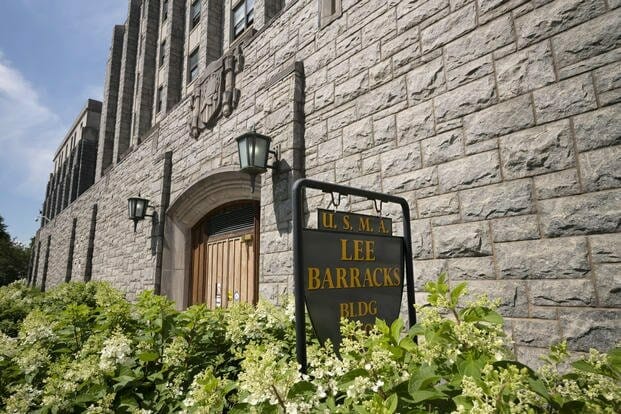 The names of Robert E. Lee and other less famous Confederate officers should be removed from landmarks and memorials at West Point and the U.S. Naval Academy, a commission created by Congress says.

The Naming Commission on Monday released the latest of its recommendations to rid the military of tributes to secessionists who fought against the U.S. during the Civil War. The report on the two military academies — some of the oldest institutions in the country — comes after the group proposed renaming nine Army bases honoring Confederates.

The halls, housing and roads at the academies dedicated to those Confederate officers should all receive new names, according to the eight-member panel, which is chaired by retired Adm. Michelle Howard and includes retired Gen. Robert Neller, a former Marine Corps commandant.

Read Next: The Wars in Iraq And Afghanistan Have Killed at Least 500,000 People, According to a Report

Officers who served with the South when the Confederacy explicitly took up arms in support of slavery are memorialized at the Reconciliation Plaza monument created in 2001 at West Point and Lee’s name is on five West Point landmarks, including a child development center, according to the commission.

“Lee’s armies were responsible for the deaths of more United States soldiers than practically any other enemy in our nation’s history,” the commission wrote in its second report to Congress.

The panel also discovered a triptych, or multi-paneled art piece, at the entrance of West Point’s Bartlett Hall that says “Ku Klux Klan” and appears to show a hooded figure with a rifle. It urged Defense Secretary Lloyd Austin, the first Black person to hold the position, to create rules for removing such references.

“The marker falls outside the remit of the commission,” it wrote in the report. “However, there are clearly ties in the KKK to the Confederacy.”

Austin should authorize the secretaries of the Army and Navy to begin the renaming at the academies, which could be carried out by the officer schools under their existing procedures, the commission recommended.

The priciest change would be to West Point’s Reconciliation Plaza, which could cost $300,000 to renovate. The series of markers was donated by the West Point class of 1961. It sought to commemorate the start of the Civil War in 1861 and the reconciliation after the war between the North and South.

One of the markers portrays Pierre Gustave Toutant Beauregard, a Confederate general and supporter of slavery who served as West Point superintendant for five days, “leading Confederate forces in insurrection against Fort Sumter.”

After a simmering national debate over Confederate monuments, Congress created the commission in January 2021 as part of the annual defense authorization bill. Its goal was to remove the tributes, many of which were added long after the end of the Civil War during a movement in the U.S. that attempted to rewrite the history of the South and slavery.

During the Civil War about one-fifth of West Point’s students, which included many from secessionist states, left the academy to serve with the Confederacy, according to the commission. It was a “substantially” higher percentage than prestigious civilian universities such as Harvard, Yale, Princeton and Columbia.

“After the war, antipathy towards Confederates ran long and deep. Although the Civil War ended in 1865, no Confederate leader was invited to West Point until 1898,” the report noted. “For more than 60 years after the war’s end and well into the 20th century, no Confederate monuments existed at the Military Academy. Attempts to establish them were consistently met with solid resistance.”

That did not change until the early 1930s when the so-called “Lost Cause” movement, which attempted to recast the South’s secession as heroic and falsely diminish its fervent support of slavery, swept the U.S. Only then did West Point finally relent and erect tributes to Confederates.

“The commissioners do not make these recommendations with any intention of ‘erasing history.’ The facts of the past remain and the commissioners are confident the history of the Civil War will continue to be taught at all service academies with all the quality and complex detail our national past deserves,” the panel wrote in the report. “Rather, they make these recommendations to affirm West Point’s long tradition of educating future generations of America’s military leaders to represent the best of our national ideals.”

The first report by the commission was completed in May, and included recommendations to rename the nine Army bases including Fort Bragg, North Carolina, and Fort Benning, Georgia — both named after Confederates.

It recommended Bragg become Fort Liberty and Benning be renamed Fort Moore, after Lt. Gen. Hal Moore, who led men in the Ia Drang valley during the Vietnam War, and his wife Julia, who prompted the Pentagon to create casualty notification teams.

It also recommended Fort Hood, Texas, become Fort Cavazos, honoring Gen. Richard Cavazos, a sixth-generation Texas native who led a company of Puerto Rican soldiers in the Korean War and who later led an infantry battalion during the Vietnam War.

That report was sent to lawmakers who will likely have a role in those changes.