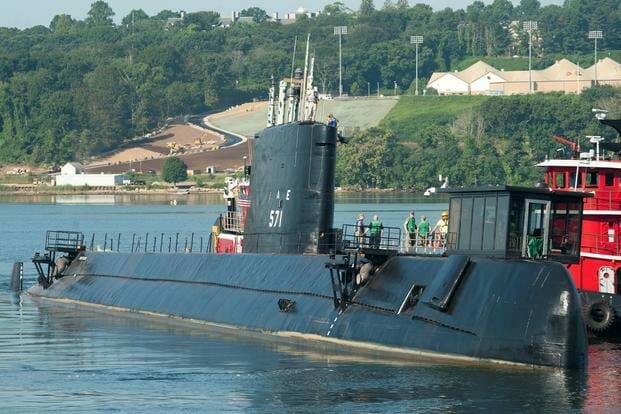 The Navy on Friday celebrated the completion of a $36 million preservation of the USS Nautilus, the world’s first nuclear-powered submarine, as elected officials celebrated the ship’s history and advocated for continued investment in the nation’s undersea force.

The Nautilus, which was launched in 1954, decommissioned in 1980 and opened to the public at the Submarine Force Museum in 1986, departed the museum last October for work at the Naval Submarine Base and returned Aug. 4. The work involved repairing the hull, replacing topside decking, upgrading lighting, painting and more.

During Friday’s ceremony at the Nautilus’ pier, Adm. Samuel Cox, director of Naval History and Heritage Command, posed and answered the question, “She’s the first submarine to have atomic power. So what?”

He said the Allies “came perilously close to losing World War I and World War II” due to German submarines, and with that recognition, “everything in the 1950s was a race, and we won. This submarine was built fast, designed fast, got underway fast.”

He said the U.S. didn’t get everything right and lost two subs in the 1960s, but the Soviets lost more.

Cox said “there are millions of people who are alive today because of the submarines and the fact that they never had to fire at shot at the Soviets, so that’s the “so what.'” He added that repairing the Nautilus and keeping it for another 30 years is half the cost of getting rid of it.

Lt. Cmdr. Derek Sutton, director of the Submarine Force Museum and officer-in-charge of the Nautilus, said the goal is a 30-year “clean bill of health” for the boat and for the Nautilus to stay attached to the museum.

Sutton said the planning for the repairs began in 2015, and that the Nautilus has attracted more than 3 million visitors since it became the focal point of the museum.

Lonny Barham, president of the Nautilus Alumni Association, said the best way to honor the 2,500 people who served on the Nautilus is to preserve the ship.

He served on the Nautilus from ages 18 to 21, and his daughter Jennifer Murray recalled living the Nautilus through him. He told her stories of surfacing north of the Arctic Circle to do repairs while on a mission, and stories of friends and camaraderie.

At age 11, Murray went to see the Nautilus with her father shortly after it was docked in Groton, and Murray said as soon as her own children were old enough to walk, Barham began bringing his grandchildren there.

A recognition of time and place

The ceremony took place on the first day of the Connecticut Maritime Heritage Festival, and Gov. Ned Lamont also said that we must not “take strategic deterrence for granted, on this 9/11 weekend.”

The governor and other officials credited former Connecticut Sen. Chris Dodd with lobbying to have the Nautilus retired in Groton.

“What an opportunity we have now, in this corner of the state, to talk about the history of the relationship between America and the sea,” said Sen. Chris Murphy, D- Conn., also citing the recent start of construction of the National Coast Guard Museum across the Thames River.

He said the renovation of the Nautilus “is really vital” because it helps tell the story of submarines to people who otherwise wouldn’t be able to board one, and to “generate enthusiasm and support for this vital program.”

© Copyright 2022 The Day, New London, Conn.. All rights reserved. This material may not be published, broadcast, rewritten or redistributed.