It’s time to do more for veterans seeking employment. We have an obligation to make sure our veterans are able to navigate this difficult labor market and succeed in the civilian workforce. Your donations help us establish new initiatives to deliver enhanced career development, job search services and Jobs for transitioning veterans. Working Warriors is also developing “Best Practices” guidance for the private sector to help businesses identify and hire veterans. Major General Comstock’s active duty career included assignments in the 82nd Airborne Division, 1st Cavalry Division in the Republic of Vietnam, and Ranger instructor at Ft. Benning, Georgia. Major General Comstock served in a variety of positions in the Army Reserve to include US Central Command’s Reserve Component Advisor/Deputy J3. He served as the Commander 3d COSCOM, Deputy Commander and Commander Task Force 21 during the 1996 Operations Joint Endeavor mobilization. He served as Commanding General of the 311th Corp Support Command (COSCOM). He also served as Battalion Commander of the 155th Supply & Services Battalion. At the 6222nd US Army Reserve School, he served as the MOS Director, the Director of Enlisted Courses, and the Operations Officer. Prior to these assignments he served in a variety of positions with the 11th Special Forces Group (Airborne), 1st Special Forces. Major General Comstock’s initial USAR assignment was as a Company Commander, Co. C, 1st BN, 423rd Regiment 3rd BDE (AIT) 70th Division (TNG).

Major General James W. Comstock was inducted into the MSU Army ROTC Hall of Fame in 2009.

In his civilian career Major General Comstock, has over 40 years of experience in the insurance, investment and consulting professions.

He has held various sales and management positions to include being a regional and national sales manager in the areas of pensions, equities, life insurance, annuities, and group insurance. He served as a partner in a brokerage organization and managed his own full-service insurance operation. He has consulted in the areas of institutional investments, medical and health products, and defense related issues and items.

He is a member of the Scottish Rite, Veterans of Foreign Wars, American Legion, Reserve Officers Association, California Employer Support of The Guard and Reserve, AUSA, Mission Readiness, and the Sovereign Military Order of The Temple of Jerusalem.

Jim and his wife Cheryl reside in San Diego, CA. 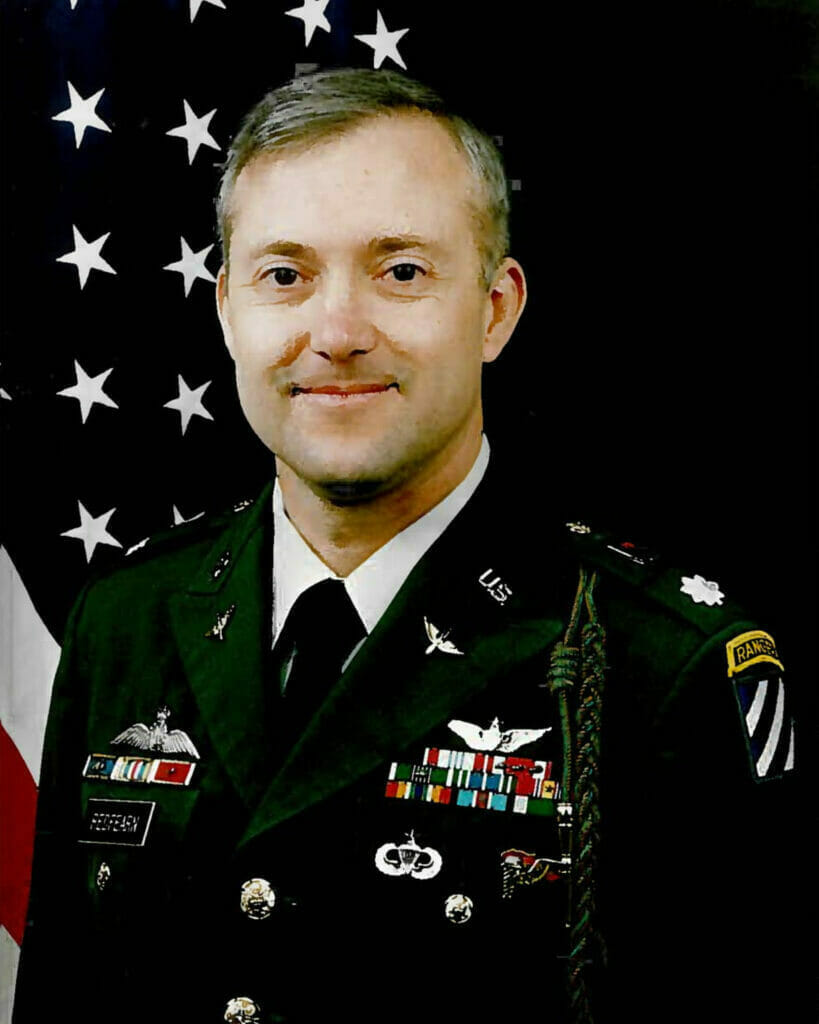 John E. Redfearn III, Lieutenant Colonel of Aviation, U.S. Army (Retired), holds a Masters in Business Administration from Webster University, a Masters in Education (Guidance & Counseling) from The Citadel, and a Bachelor of Arts degree in Foreign Languages (German & Russian) from The Citadel. He was an International Fellow at Universitaet Salzburg, Austria. He is also a graduate of The U.S. Army Command and General Staff College as well as Armed Forces Staff College – National Defense University. He is has long been a teacher, trainer, and mentor having taught over the years at the undergraduate level as an Adjunct Professor for Central Texas College (personal finance, business, management, business law, salesmanship, and military history) and previously for seven years at Troy University (managerial finance, business communications, and psychology); as well as at the high school level in Charleston, SC (Chemistry and Physics), and as a military flight instructor at the U.S. Army Aviation School (helicopters).

Prior to forming his own companies fourteen years ago, John previously served as Vice President of MAG Mutual Financial Services in Atlanta for ten years. He tripled the size of his business group, opened offices is 3 neighboring states – hiring and training those agent/advisors, and built 5 proprietary programs for the Medical Association of Georgia for the benefit of physicians. He holds a stock broker’s registration in 12 states, is licensed as an insurance agent in those states, and operates his own insurance agency in 12 states.

He holds a mortgage broker license for his firm for both residential mortgages and commercial loans. He served for four years on the National Field Advisory Board Member for a previous FINRA Broker-Dealer (one of 10 field advisor board members out of the 450 representatives affiliated with that firm). He similarly served on the National Field Advisory Board for another previous Broker-Dealer (one of four advisory board members from among the 400 advisors across the nation) with that firm. John also served as Senior Vice President – Sales for that same former broker dealer. The American Medical Association Insurance Agency (AMAIA) selected him as a Financial Specialist after being vetted through the AMAIA’s extensive screening and due diligence process. He also previously served for three years as a Member of their AMA Insurance Agency Trusted Source Network of financial planning professionals to provide “trusted sources” to physicians for their high end and complex financial planning needs.

During a military career spanning two decades, he served 4 tours of duty in Germany (both Aviation and Armor assignments), an air cavalry tour flying Cobra gun ships in Korea, as well as a two year exchange officer tour flying with Number 9 Squadron, Royal Australian Air Force in Brisbane, Queensland. He commanded an Apache Attack Helicopter Battalion (3rd Battalion, 1st Aviation Regiment) as well as an independent field grade Aviation Company (25th Aviation Company) in Germany; served as the aviation brigade operations officer at Fort Carson, Colorado; Chief Operations Officer for the Mobile Consolidated Command Center of US Space Command; senior Aide-de-camp to the Commanding General (3rd Army) & Army Component Commander of US Central Command; and finally Chief of Personnel Plans & Operations for U.S. Army Europe before retiring from active duty. He received his Disabled Veteran status from the US Department of Veteran Affairs in 1995; & Professional Fiduciary appointment in 2019. Rated as a Master Army Aviator, John holds an FAA Commercial Pilot’s license for single and multi-engine fixed and rotary wing aircraft for both VFR and IFR flying. He is fluent in German and has a rudimentary knowledge of both Russian and Spanish.

Veterans throughout the nation are in need of help. Your donation matters to them or find out other ways you can help.

TELL A VETERAN THANK YOU!

Leave your message of thanks and gratitude for the men and women who served in our military.

If you’ve been thinking about getting involved as a volunteer helping veterans, we have a tremendous opportunity for you!