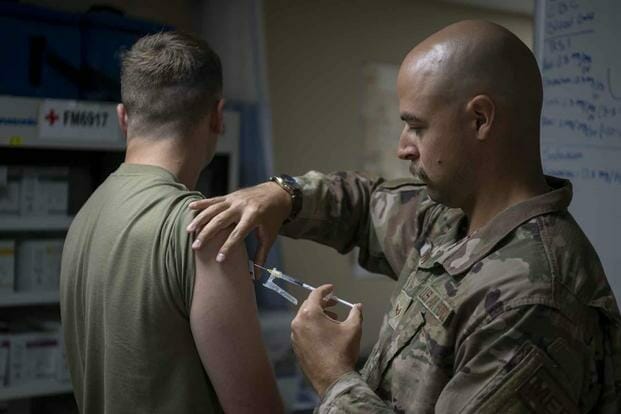 The Air Force and Space Force are offering one-day passes to encourage service members to get the latest COVID-19 booster.

On Wednesday, the Department of the Air Force announced in a press release that airmen and Guardians who get the COVID-19 bivalent booster, released in September and designed to provide additional protection against omicron variants of the coronavirus, “are authorized a one-day special pass from their commander” as long as they get the shot before Dec. 1.

“The virus continues to pose a risk to the health and welfare of service members, civilian employees and families,” the Air Force said in the news release. “For service members, timing of the one-day pass will be consistent with mission needs, members must present documentation, and commanders may award the special pass retroactively to those members who have already received a booster.”

Read Next: Mechanics May Have Accidentally Forced the Air Force to Ground More Than 100 C-130s

To date, only 30 million Americans have received the bivalent booster, or about 10% of the population, according to the latest data from the Centers for Disease Control and Prevention.

The services’ incentive comes at a time where the military is still grappling with getting troops to fully comply with its original COVID-19 vaccine mandate; so far, the Pentagon has not made booster shots mandatory.

A pending lawsuit filed by troops attached to Wright-Patterson Air Force Base, Ohio, has led to temporary protections for the more than 9,000 active-duty, Active Reserve, reserve and National Guard members of the Air Force and Space Force who requested a religious exemption from the COVID vaccine, although only those who have been denied an exemption would face immediate action. As of Nov.1, the service had approved more than 1,000 medical and administrative exemptions to the vaccine.

According to the most recent vaccination data for the Department of the Air Force, 98% of the total force — active duty, reserve and Air National Guard — has been inoculated against COVID-19. Around 12,000 of the 497,000 total personnel in the Air Force and Space Force have not. The services have not released numbers on what percentage of their troops have received boosters.

Late last month, the Air Force said it is allowing instructor pilots who remain unvaccinated against COVID-19 to fly again. They had previously been grounded.

In an Oct. 25 memo, Maj. Gen. Phillip Stewart, commander of 19th Air Force, wrote that, though the pending court case at Wright-Patterson “does not affect” the service’s policy regarding unvaccinated flight instructors, he was reinstating their flying privileges because it was “in the best interest of the Air Force.”

“This guidance will be reassessed after the final determination of the court,” he added.

The service members who are part of the religious exemption lawsuit are represented by New York-based Siri & Glimstad. They were all “found by a Chaplain in the Air Force to hold sincere religious belief substantially burdened by the order to be vaccinated,” according to a press release from the law firm.

Vaccine refusers often state that the use of fetal cell lines in the creation of the shots conflicts with their views on abortion.

The Pfizer and Moderna COVID-19 vaccines do not need fetal cell lines for development or production but were tested on fetal cell lines replicated from a fetus aborted in the 1970s to ensure their efficacy. Only the Johnson & Johnson vaccine is made using fetal cell lines.

The Pentagon announced in lateAugust that Novavax — a COVID-19 vaccine developed without the use of human fetal-derived cell lines or tissue — is an option for service members.

“Novavax may accommodate those with sincerely held beliefs who felt limited in their options with the previous vaccine offering,” Maj. Gen. Sharon Bannister, medical operations director, Air Force surgeon general, said in a statement in July.

Since the start of the pandemic, there have been approximately 163,000 reported cases of COVID-19 in the Air Force and 166 deaths, according to the latest data.