Attacks on Satellites May Trigger Military Response, US and Japanese Officials Say 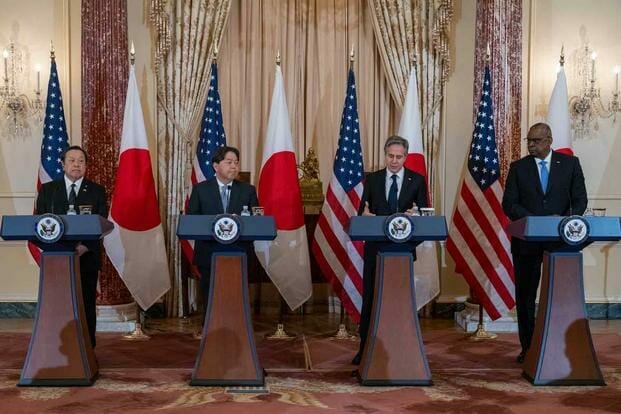 Defense Secretary Lloyd Austin and Secretary of State Antony Blinken announced alongside Japanese officials on Wednesday that they would consider military retaliation in response to attacks on satellites, a policy that puts China and Russia on notice amid looming threats in space.

Space Force and U.S. Space Command are in charge of monitoring and protecting America’s satellite fleet. With additional treaty obligations between the U.S. and Japan, American forces could be drawn into a skirmish if Japanese satellites are targeted.

“The outer space component of this is important to the security and prosperity of our alliance. We agreed, as you’ve heard, that attacks to, from or within space present a clear challenge, and we affirmed that, depending on the nature of those attacks, this could lead to the invocation of Article V of our Japan-U.S. Security Treaty,” Blinken said, referencing the number of the clause in the treaty that covers mutual defense. “That is significant.”

The focus on space as part of the U.S.-Japan partnership is a big shift, according to Matthew P. Funaiole, a senior fellow at the nonprofit Center for Strategic and International Studies who researches issues relating to space and China.

“We’re talking about how we update and refine and reinforce an alliance that’s pretty old,” Funaiole told Military.com on Wednesday. “If we’re going to have defense pacts with countries, they need to include what the new and emerging domains are that can play a role in warfighting.”

Fears about interference with military and commercial satellites have grown significantly over the years and were stoked by China’s 2007 anti-satellite missile test, which created more than 3,000 pieces of space debris. That debris will likely remain in orbit for decades, according to the Secure World Foundation, a nonprofit that focuses on peaceful interaction in space.

Space Force officials have also warned that China is developing and fielding new technology such as jammers and lasers that could harm America’s satellites.

For now, what specific action would result in a response from Japan or the United States is vague — potentially purposefully so, according to Funaiole.

The U.S. and Japan are scheduled to sign a separate agreement on space sometime this week. The agreement to activate Article V of the U.S. and Japan’s security treaty based on an action in space was praised by Japanese officials.

“The fact that we were able to agree on the announcement of the applicability of Article V of the Japan-U.S. Security Treaty on attacks on others in outer space was a significant achievement in terms of the reinforcement of deterrence capability of the alliance as a whole,” Yoshimasa Hayashi, Japan’s minister of foreign affairs, said Wednesday.

As threats to satellites have become more apparent, the Space Force has expanded its footprint.

This past November, the service announced that 21 civilians and Guardians will be stationed in Hawaii with U.S. Indo-Pacific Command, or INDOPACOM. It was the first assignment outside of the continental U.S. for the newest service branch and the first time Guardians have been part of a regional combatant command.

In early December, Space Force Guardians started setting up shop at U.S. Central Command to help the military focus on space navigation, missile warning and satellite communications against adversaries in the Middle East and South Asia.

Those shifts come as the military flags more provocations from China.

In August, China launched missile strikes near Taiwan during a military exercise shortly after then-House Speaker Nancy Pelosi’s visit to the country, which alarmed Japanese officials.

On Dec. 21, USINDOPACOM issued a statement admonishing a Chinese fighter jet’s “unsafe maneuver during an intercept” of an Air Force RC-135 aircraft in international airspace.