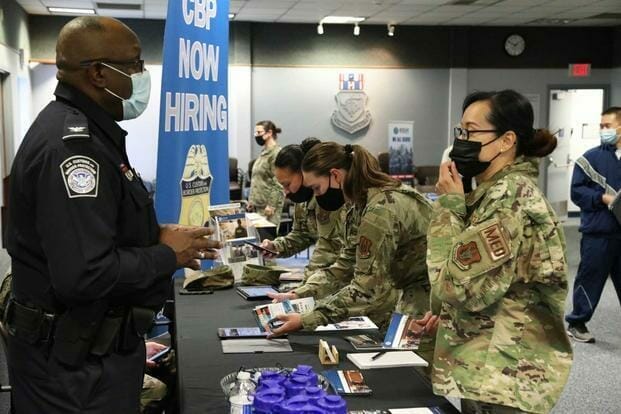 The Air Force and Space Force announced Thursday that there would be reenlistment bonuses available for 63 job fields, a substantial increase in the number of career specialties eligible for more money to continue serving.

For the Air Force, there are 51 career specialties ranging from Chinese and Russian language analysts to dental hygienists and military working dog handlers.

A dozen careers in the Space Force, such as cyber intelligence analysts and communications specialists, also qualify for the raises.

Last year, only 40 career fields were eligible for enlistment bonuses. Compensation could be as much as $100,000, according to the list of eligible careers, but are ultimately determined based on experience and years of service.

This wave of reenlistment bonuses comes as the Department of the Air Force pushes to recruit and retain service members amid a pandemic economy and labor shortage in which private corporations have the upper hand on retaining talent with fewer eligibility requirements and the ability to rapidly raise salaries.

Earlier this month, the Air Force announced it was offering hefty bonuses — up to $50,000 for some of the service’s most dangerous jobs — for recruits to join the ranks and ship off to training quickly.

Maj. Gen Ed Thomas, the Air Force Recruiting Service commander, told Military.com in an interview Friday that at the start of the pandemic recruiters were still managing to find future airmen to sign contracts.

In 2021, the Air Force said it hit its recruiting targets for the first time in five years. But as the effects of COVID-19 snowballed, a labor shortage grew and the problem became steeper.

Adding to that, the Department of Defense also has a smaller pool of potential service members to pull from as fewer and fewer Americans would be deemed eligible to join.

In 2019, the DoD noted that only 29% of young Americans could serve without some kind of waiver for being overweight or an existing physical or mental health issue.

These two factors have created major headwinds in 2022, Thomas said.

“We had a tremendous amount of momentum during [the start of] COVID, and our recruiters were able to adapt and innovate and continue to be able to attract the applicants,” Thomas said. “But the longer COVID went on, coupled with the national labor shortage, and combined with the declining propensity and eligibility, that momentum has slowed significantly.”