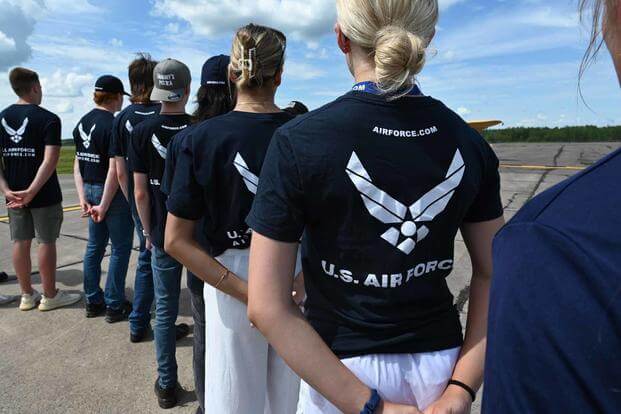 Air Force and Space Force recruits who fail a drug or alcohol test as they get ready to ship out for training may still be allowed to join the ranks under a new policy proposal being weighed by the services.

Department of the Air Force spokeswoman Ann Stefanek confirmed to Military.com that officials are currently considering the policy change.

“While a policy recommendation has not yet been finalized, the Department of the Air Force is reviewing a potential change to its Drug and Alcohol testing policy that would allow for the provision of waivers for candidates who test positive on their initial Drug and Alcohol Test at Military Processing Stations,” Stefanek said.

Read Next: The Air Force and Space Force Have New Diversity Targets for Their Officer Corps

The possible policy change comes as the military as a whole faces a dwindling population of eligible service members and what the Air Force has said is one of the most dire recruiting environments in decades.

According to a 2017 Pentagon study, only about one-quarter of young Americans are even eligible for service. Eligibility is limited by an increasing number of potential recruits who are overweight or are screened out due to minor criminal infractions, including the use of recreational drugs such as marijuana.

The military has zero tolerance for drugs such as cocaine, heroin or methamphetamines, but recruits in many branches have been able, under certain circumstances, to get waivers for marijuana — which has become legal for recreational use in a handful of states.

Marijuana use actually surpassed cigarette smoking in America, according to a new poll from Gallup. Sixteen percent of Americans say they currently smoke marijuana, whereas a new low of 11% of American adults reported being smokers.

“Americans’ regular use of marijuana is modestly higher than cigarettes at this point, but the trend over recent decades in marijuana use is upward,” the Gallup findings showed.

The vast majority of states have legalized marijuana for medical use, recreational use or both. Only 11 states have not allowed marijuana in any form: Indiana, Wisconsin, Kentucky, Tennessee, North Carolina, South Carolina, Idaho, Wyoming, Nebraska, Kansas and Texas, according to MJBizDaily, a trade publication that follows the industry.

While marijuana and other THC-related products may be legal in many states, they are still illegal at the federal level and, therefore, outlawed for service members.

Notably, more than 50% of all new recruits come from states where marijuana is now legal, at least for medicinal use, according to a 2021 study by Rand Corp., a think tank that researches issues facing the military.

That study, while examining the Army, found little difference in performance by recruits who enlisted with marijuana waivers.

“Recruits who make it into the U.S. Army despite low-level histories of marijuana use perform no worse, overall, than other soldiers,” the Rand study said. “That should be welcome news in recruiting offices nationwide.”

This also marks the latest policy change that the Air Force and Space Force are weighing to attract more recruits and offer more progressive options for appearance and dress in uniform.

Last month, the Department of the Air Force told Military.com that officials are discussing a pilot program that would allow airmen and Guardians to grow beards, one of the most requested changes to uniform and grooming standards among service members.