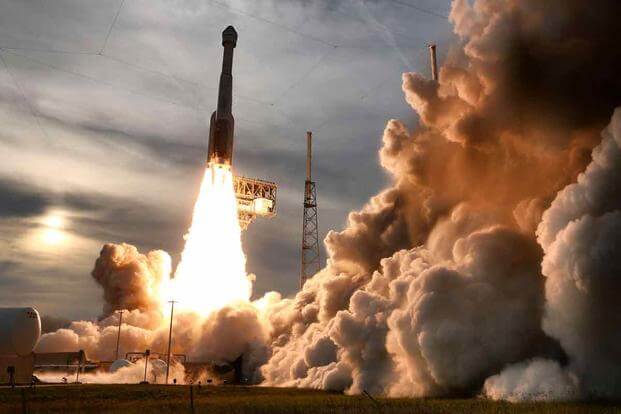 It’s slated to be a busy year of rocket launches from the Space Coast with a pace that could introduce some new names and set new records.

Launch pads at both Kennedy Space Center and Cape Canaveral Space Force Station have been hitting a pace of more than one launch a week, finishing up 2022 with 57 rockets that made it to space.

That pace could be in line to nearly double as more launch service providers set up shop in Brevard County, said Frank DiBello, President and CEO of Space Florida, the state’s aerospace economic development agency.

“How many can we sustain? We’re building and investing, not just us alone, but the Space Force and NASA,” he said. “And commercial contractors are investing in infrastructure that should be able to support 100 launches a year. That was our plan. I think we want the capability to be able to do two, two-plus a week.”

A big chunk of that will come from SpaceX, which continues to roll out its Falcon 9 rockets like dominoes, but 2023 should also treat the Space Coast to several appearances of the powerhouse Falcon Heavy.

While NASA’s Space Launch System rocket grabbed headlines in November launching Orion to the moon for the Artemis I mission, it won’t launch again until at least 2024, so the next best thing for sheer power from a Space Coast launch comes courtesy of Falcon Heavy, which to date has only flown four times.

One of the treats to watching it go up, though, goes beyond the 5.1 million pounds of thrust. Spectators get the added bonus of the sonic booms of two of its three first-stage boosters returning for a touchdown back on land.

Chances to watch the rocket fly can come as early as January with the planned USSF-67 mission for the Space Force. SpaceX also has a second Space Force mission and launch of a commercial satellite aboard its heavy-lift rocket expected in the first half of the year, along with an October liftoff of the delayed NASA Psyche probe to explore a distant asteroid.

For its smaller Falcon 9 rockets, the highlights will be the four planned launches from KSC sending humans into space in Crew Dragon capsules, aboard both Crew-6 in mid-February and Crew-7 in the fall, as part of NASA’s Commercial Crew Program to the International Space Station.

Also flying in Dragons will be the all-civilian Polaris Dawn flight returning billionaire Jared Issacman to space after flying in 2021 on the Inspiration4 mission. Polaris Dawn is the first of three planned missions for Issacman, who once again is bringing along three passengers. The orbital mission, which will once again try to raise money for St. Jude Children’s Research Hospital, will feature a tethered spacewalk by at least one of the crew. That launch could come as early as March.

Another private launch is on the books for as early as May as Axiom Space once again hitches a ride for its customers on a SpaceX Crew Dragon for a planned 10-day stay on the ISS. Axiom-2 follows 2022′s successful Axiom-1 mission to the station, which brought up three customers who paid $55 million each along with an Axiom employee and former NASA astronaut to lead the way.

For 2023, Axiom-2 will feature former NASA astronaut Peggy Whitson, also now employed by Axiom Space. The missions are laying the groundwork for Axiom Space to send up its own modules to attach to the ISS and eventually become its own free-standing commercial space station.

SpaceX, though, isn’t the only spacecraft planning to send humans to the ISS from Florida next year. Boeing’s long-delayed CST-100 Starliner is set to finally complete its crewed test flight to the ISS sending up NASA astronauts Barry Wilmore and Sunita Williams for a quick trip on the books for April. The uncrewed version of Starliner successfully docked with the ISS back in May more than 2 1/2 years after an unsuccessful first uncrewed mission.

Starliner will launch atop a United Launch Alliance Atlas V rocket from Canaveral’s Launch Complex 41. Humans haven’t flown to space from Canaveral since Apollo 7 took off from what was then Cape Kennedy’s Launch Complex 34 in 1968, as every successive Apollo flight as well as those in the Space Shuttle Program and SpaceX Crew Dragon flights have taken off from KSC.

If all goes well, Boeing will have caught up to SpaceX, which has been handling taxi service to the ISS since 2020, and NASA will then trade off crew flights between the two each year.

ULA meanwhile is expected to finally bring its new Vulcan Centaur rocket to market with an initial launch expected in early 2023. It’s the first of two certification flights on tap before ULA’s three planned launches for the Department of Defense in 2023. Already delayed from 2021, ULA was waiting on engines for the new rocket from Jeff Bezos’ Blue Origin. It uses two of the new BE-4 engines, which were finally delivered and installed on the first Vulcan rocket in November.

Also waiting on Vulcan is a new commercial cargo supplier to the ISS, Sierra Space and its Dream Chaser spacecraft that looks like a mini space shuttle. Dream Chaser will join SpaceX’s Cargo Dragon and Northrop Grumman’s Cygnus spacecraft as options for NASA, and be the first cargo option to allow for a return trip that lands back at Kennedy Space Center. Sierra Space maintains its first mission remains on track for 2023.

One new rocket that likely won’t be making a first flight next year is Blue Origin’s own New Glenn, which also uses the BE-4 engines, but needs seven of them. And with ULA and its five planned Vulcan launches already slated for 2023, the first 10 engines are spoken for.

Both ULA and Blue Origin, though, will be in need of a ramped-up engine supply as both are customers of Amazon’s Project Kuiper internet satellite plan, which has as many as 83 launches planned by 2029 to send the majority of 3,236 satellites into orbit that will create a product similar to SpaceX’s Starlink constellation.

DiBello said he expects ULA to get closer to SpaceX in terms of regularity of launch sooner than later.

“I think once Vulcan starts to fly, I think you’ll see the same capability exhibited by ULA,” he said. “ULA has an incredible track record leading up to today’s capability. Once they get going with the Vulcan I think you might see that same discipline in launch occur.”

While ULA and SpaceX will fill up most of the Space Coast launch schedule, another new rocket company expects to join the launch ranks soon as well.

Relativity Space and its 3D-printed Terran 1 rocket is sitting at Canaveral’s Launch Complex 16, set for a static fire of its engines and awaiting approval from the Federal Aviation Administration for its first-ever launch.

The Long Beach, California-based company would be the second small rocket company within a year to launch from Canaveral following the two launches by Astra Space in 2022. Astra’s two Rocket 3.3′s suffered failures after liftoff with issues in their second stage, so they won’t be returning to the Space Coast with the its planned Rocket 4 design likely until 2024.

But Relativity looks to follow up the test launch that it called its “GLHF” mission, as in “Good Luck, Have Fun,” with further Terran 1 launches from Canaveral, including one in 2023 for NASA. Down the line, the company plans to bring its larger Terran R rocket to the pad.

Relativity and Astra are just two of several companies that could be launching from Canaveral, if not in 2023, soon after. Firefly Aerospace, which had its first successful orbital flight in October in California, has a launch lease from Space Launch Complex 20. ABL Space Systems, which is aiming for its first-ever successful launch from Alaska in early 2023, had previously announced plans to fly from one of Canaveral’s launch pads to take up a pair of prototype satellites for Amazon’s Project Kuiper.

By 2024, the Space Coast could be juggling schedules from SpaceX, ULA, Relativity, Astra, Firefly, ABL and NASA.

“At one time, that might have been challenging,” DiBello said. “But the both Space Force and NASA and the FAA have made great strides in streamlining range and launch operations so that we can handle the capacity.”

Space Launch Delta 45 and the Eastern Range recently had prepared to support two SpaceX launches with overlapping windows, so could have conceivably seen two rockets flying up within 33 minutes of one another.

“The technology is advancing for airspace management, such that seeing two launches a week on an average is eminently doable,” DiBello said. “We think the market demand is there — we clearly expect that in the remainder of this decade we’ll see somewhere between 50,000 and 100,000 satellites launched. And we expect the dominant percentage of those to be launched from the U.S. and from Florida.”

© Copyright 2023 Orlando Sentinel. All rights reserved. This material may not be published, broadcast, rewritten or redistributed.