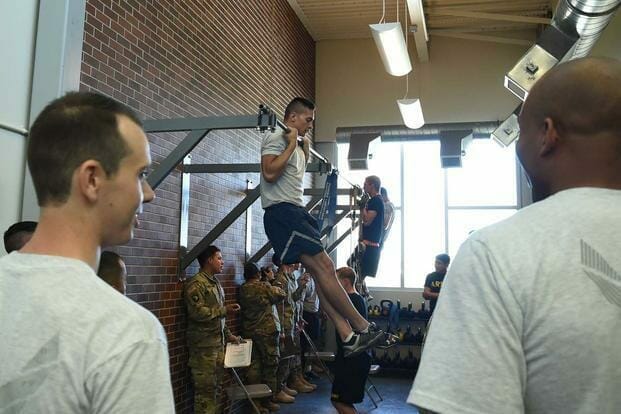 A project for a $30 million renovation of the fitness center at Schriever Space Force Base outside of Colorado Springs, Colorado, was approved last month, giving Guardians stationed in the rural area access to a more modern gym after several years of fighting for updates to the building.

U.S. Sen. Michael Bennet, D-Colo., earmarked the project in the fiscal 2022 omnibus funding bill. The funding was secured last month, and will be crucial for maintaining morale, recruitment and readiness, an aide for the senator told Military.com

“Our service members at Schriever are on watch 24/7 — and the $30 million we secured in the government spending bill will meet the demands of the growing population on base and support their readiness,” Bennet said in an emailed statement.

In the 1980s, a little more than 200 Air Force personnel called Schriever home. Now, more than 8,000 Guardians, contractors and other military personnel work out of the Space Force base.

An aide for Bennet said the rural location of the base makes it hard for Guardians to easily access a gym outside of the fence line and the one at Schriever is too small with the recent influx of service members at the installation.

The nearest private gym options are in Colorado Springs, about 30 minutes away. Prior to becoming a Space Force installation last year, Schriever was an Air Force base focused on missile defense and satellite logistics.

When it was an Air Force base, Schriever’s fitness center had been undergoing small renovations for half a decade.

In 2017, rot and corrosion were found behind the walls when the base began renovating the locker room showers. Prior to that, there had been no changes made to the building since 2001, according to an Air Force press release at that time.

With the $30 million funding secured, a government contract seeking bids for the renovations was posted online late last month. Details of the project show lofty plans for the gym.

The more than 5,000 square meters being added to the gym will include new construction and renovations for “an indoor running track, two large multi-use basketball courts, racquetball court, fitness areas, group exercise area,” as well as updated men’s and women’s locker rooms.

Bennet told Military.com that securing the funding for the project “was an opportunity for Colorado communities, including our military communities, to tell Washington directly about their needs and concerns.”

A timeline for the completion of the renovations has not yet been released.

In 2023 budget documents released last month, Space Force — which falls under the department of the Air Force — requested $24.5 billion, which marked a nearly 40% increase from the previous year.

There were no construction estimates in the 2023 budget request for the Space Force, but the Air Force budget did ask for $68 million to build a dormitory at Clear Space Force Station in Denali, Alaska.

Many construction projects for the Space Force, such as the fitness center renovations at Schriever, will be picked up by state or congressional funding.

The construction of the fitness center at Schriever also comes as the Space Force makes plans to scrap an annual physical fitness test and will rely mostly on wearable fitness trackers by 2023.

As Guardians await beta-testing and rollout of the program, they will be required to complete an Air Force physical fitness test in 2022 if they haven’t done so already.