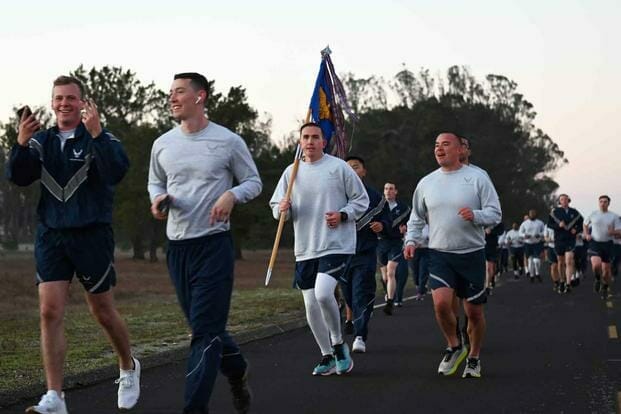 Space Force Guardians will not be required to take a fitness assessment in 2023 if they took one in 2022, part of the newest service branch working out the kinks in its own health and wellness program after using the Air Force’s for the past few years.

Last year, the service, which is under the Department of the Air Force, issued a sort of placeholder diagnostic physical fitness test that was not graded and had no punishments for poor performance. Now, as Guardians await formal guidance on their own service-specific plan, they will not be required to do another test.

Maj. Tanya Downsworth, a Department of the Air Force spokeswoman, told Military.com in an Thursday email that “the diagnostic physical fitness test Guardians took in 2022 still fulfills their fitness assessment requirement” for 2023.

Read Next: Now You Can Send Recruiters After Almost Anyone Using Updated Air Force App

However, Guardians who recently joined the force will still be required to complete the Air Force’s physical fitness assessment within the first six months of arriving at their duty station, according to existing Department of the Air Force administrative guidance issued in 2020.

Last year, Space Force leaders promised to implement a revolutionary fitness program called the Holistic Health Assessment, which would use fitness wearables — similar to Apple Watches or Fitbits — to help track exercise, diet and sleep instead of using a physical test like the other services have embraced for decades.

The Space Force wants to approach traditional physical fitness and health in a different way, officials have said, mainly because its mission is very different from that of Marines, sailors, soldiers and airmen.

Guardians are tasked with launching and monitoring America’s satellites, detecting numerous missile launches across the globe, and incorporating space into military training and strategy, all from behind a computer screen.

Robert Farley, a professor at the University of Kentucky who researches national security and intelligence with a focus on the Space Force, told Military.com that physical fitness has become a cultural staple for all the services for three reasons: health, discipline and increasing the capability to fight.

But as the battlefield becomes more modern, the capability to fight in combat has changed, Farley said, and the Space Force is embracing that change.

“I think the Space Force is smart in terms of taking a look and saying, ‘What we need in terms of physical fitness is people who aren’t going to have heart attacks and people who are capable of working pretty intensely even at a desk or behind a computer screen,'” he said.

Without a formal health and fitness program, the Space Force has relied mostly on the Air Force’s standard PT test, which includes sit-ups, push-ups and a 1.5-mile run to gauge the fitness levels of new Guardians.

The change comes after Military.com reported in August that there were worries that Space Force’s new fitness program’s data tracking would lead to micromanagement and punishment for not working out enough, despite being pitched as a nonpunitive program.

Guardians also expressed concerns that their personal data could be used against them.

Wearables such as smart watches have raised questions in the past over privacy and security. In 2018, a Department of Defense memo advised service members in deployed areas and at high-profile bases to leave their fitness trackers at home for fear of revealing compromising location data to adversaries.

“The rapidly evolving market of devices, applications, and services with geolocation capabilities presents significant risk to DoD personnel both on and off duty, and to our military operations globally,” the memo read.

Space Force officials have previously said they don’t plan to track GPS data, and that the data wouldn’t be shared with other agencies.

“The U.S. Space Force is still developing final policies to implement its vision for the Holistic Health Approach to promote total force fitness and both the short- and long-term health of our Guardians,” Downsworth said. “We remain in detailed discussions that ensure data privacy and security of our approach is sound before details will be provided to Guardians.”

Downsworth said “the Space Force is still committed to a new program” in 2023 and added that “further guidance will be published as final policies for the HHA are approved.”

Related: Space Force’s Wearable Fitness Tech Plan May Have Punitive Consequences After All