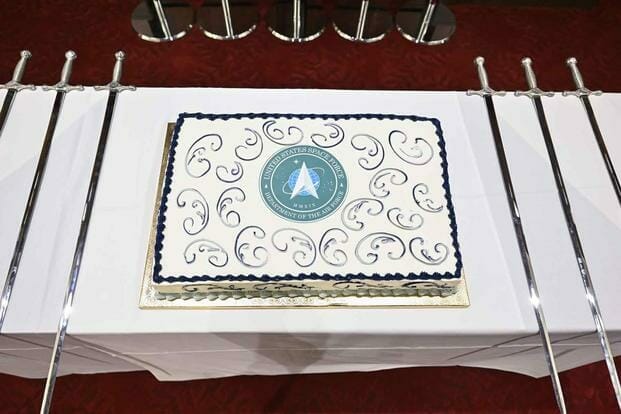 The United States Space Force celebrated its third birthday on Tuesday, after a year filled with leadership changes, new units overseas and accomplishments that have helped create an identity for the youngest service branch in the eyes of the American public.

At first, it debuted as a punchline for late-night talk shows and faced an unclear future following Trump’s one term in office. Since then, the service branch has outlived a Netflix comedy show of the same name, seen a nearly 40% increase in funding in the 2023 NDAA and set up commands in the Pacific, Middle East and South Korea to help integrate space into training and warfare.

But there are still a lot of policies, basing decisions and structural plans that need to be finalized for the service, and a new chief of space operations will be there to guide the service along the way.

Raymond’s tenure oversaw the design of the service’s first uniforms, along with its motto and official song, and even helped start the first all-Space Force boot camp for enlisted Guardians.

Gen. B. Chance “Salty” Saltzman stepped into Raymond’s shoes as the second leader of the Space Force last month.

That transition comes as space is becoming a more competitive environment. Potential adversaries such as China and Russia are developing technology that threatens America’s satellite fleet, which powers everything from GPS on phones to helping the U.S. military and its allies conduct operations on the battlefield.

There are also several organizational decisions and policies that affect the rank and file that still need to be ironed out.

There is still a looming decision on whether U.S. Space Command’s headquarters will be relocating from Colorado to Alabama, which may require some Guardians to relocate across the country.

Additionally, a debate over whether the Space Force should implement a National Guard component for the new service branch or experiment with the idea of part-time, active-duty service will face the next incoming Congress.

Rank-and-file Guardians awaiting many of those policies even created their own motto, “Semper Soon,” a riff on the official slogan of the service that reflects that so many policies seem to be just around the corner, as a way to cope with the frustrations of basic policies being enacted.

Capt. Tanya Downsworth, a Department of the Air Force spokeswoman, told Military.com that service dress uniforms are still in the prototype phase and it may be several years before Guardians get a hold of them.

“We are scheduled to begin fit and wear tests for the service dress uniform in 2023 which will help us further refine it as we work toward delivering a final product to the force in 2025,” Downsworth said in an emailed statement.

Earlier this year, the Space Force pitched the idea of the Holistic Health Assessment — its answer to the military’s yearly physical fitness tests — which was marketed as a revolutionary way for Guardians to stay in shape year-round with wearable fitness trackers.

But fears that the Space Force’s new fitness program would lead to micromanagement and punishment for not working out enough, as well as raise worries that personal data will be used against Guardians, began circling the service’s developing plans to use wearable health trackers.

The Space Force initially said it was aiming to have the program rolled out next year, in 2023, but it appears the idea is still being experimented with.

“Our overall goal is to promote total force fitness and both the short- and long-term health of our Guardians,” Downsworth told Military.com. “We are still in discussions about the specifics of the HHA and how to move forward with the program, but details will be provided to Guardians when the program is finalized.”