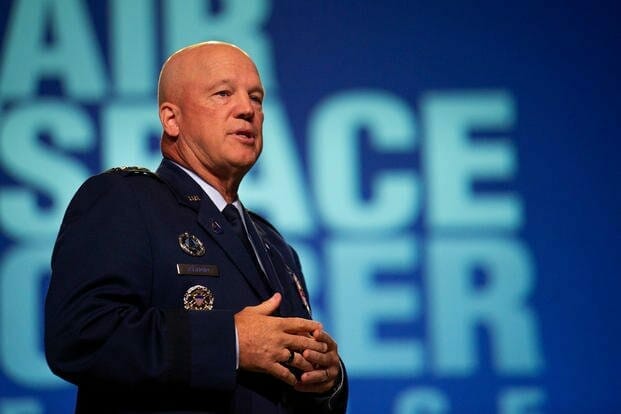 The Space Force finally has an official song, three years after becoming the sixth service branch of the U.S. military.

Chief of Space Operations Gen. John “Jay” Raymond unveiled the song
— titled “Semper Supra” after the service’s motto, which means “Always Above” in Latin — Tuesday at the Air Force Association’s Air, Space & Cyber Conference, describing it as “something we can be proud of.”

The lyrics are: “We’re the mighty watchful eye, Guardians beyond the blue, The invisible front line, Warfighters brave and true. Boldly reaching into space, there’s no limit to our sky. Standing guard both night and day, We’re the Space Force from on high.”

Senior Airman Jamie Teachenor — an Air Force veteran and former member of the Air Force Band in Colorado Springs, Colorado, who has had songs recorded by many mainstream country music artists such as Luke Bryan, Trace Adkins and Montgomery Gentry — said he texted Raymond and Chief Master Sergeant of the Space Force Roger Towberman that he wanted to be involved in crafting the song. The senior leaders took him up on the offer.

“I put together things from reading, you know, white papers and speaking with Gen. Raymond and Chief Towberman,” Teachenor said in a video revealing the song. “And so it was quite a long work in progress for a while because I wanted to make sure that everything that was in the song would adequately represent all the capabilities that our Space Force is involved with and make sure I didn’t mess up on the mission, or the vision of what the Space Force does.”

“I went for it and I did what I thought was going to be the most exciting kind of sounds,” Nelson said in the video release of the song.

Prior to the unveiling of the official Space Force song, the service had been using a portion of John Philip Sousa’s 1901 march, “The Invincible Eagle,” as an interim anthem.

Gen. Charles “CQ” Brown Jr., the chief of staff of the Air Force, was asked by reporters later Tuesday morning about his thoughts on the song. He said he didn’t want to judge it but added, “I’m sure it will grow on us.”

Editor’s note: This story has been updated to add the song’s title and correct that Teachenor is a veteran, not active duty.