Music therapy: Readjustment doesn’t have to be a solo 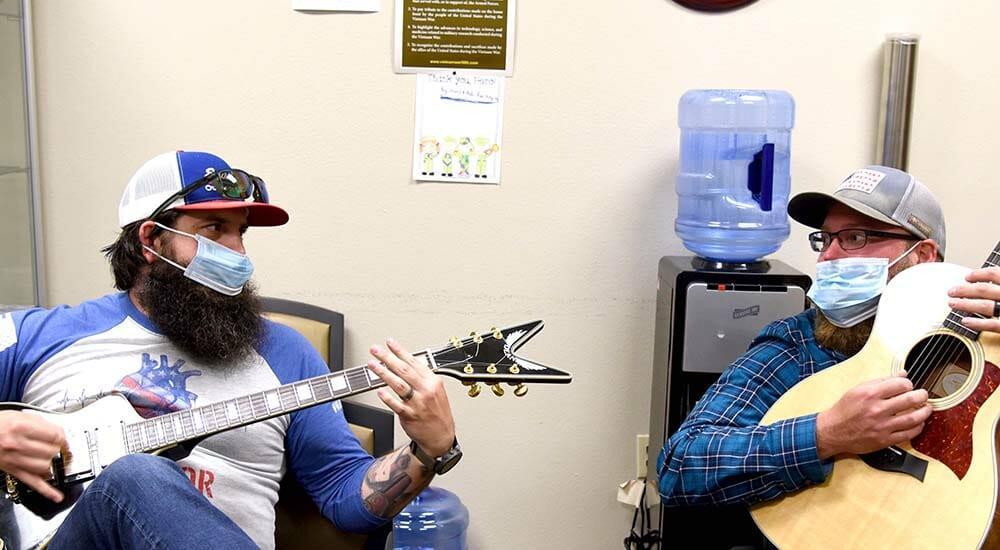 Every week, two friends meet up with their guitars for a jam session. But this is not just any ordinary get-together. These two Army Veterans attend music therapy at the Fort Worth Vet Center in Texas.

Joshua Pope and Joshua Ashby met while stationed in Germany. Both from Texas, they instantly became friends and had each other’s backs when their unit deployed to Afghanistan in 2010.

“We met each other in Germany and we got deployed together. We were on the same crew,” said Pope. “I was his gunner, he was the driver and we pretty much stayed friends.”

Readjustment counselor Van Hall has led the music therapy group at the Fort Worth Vet Center for the last few years.

Music encourages Veterans to open up

“I use music on several different levels to help Veterans readjust, whether it be through expressing themselves, learning something new, or accomplishing a task,” said Hall. “It also helps to encourage Veterans to open up and talk once we start playing music.”

Music has always been a big part of Hall’s life and he tapped into it while in the Navy.

“Music helped me get through hard times and cope with a lot of isolation, seclusion, and [being] away from home for years,” said Hall. “I was overseas three of my four years in the Navy.”

Music therapy is just one of the many therapeutic and counseling services available to Veterans, active-duty military service members, and members of the Reserve and National Guard at the Fort Worth Vet Center.

“Anytime we are jamming together and blending together in a song, something releases inside you. It’s almost spiritual,” said Hall. “You come out a bit more peaceful.”

Hall explains music therapy as a mindfulness technique, distracting someone from situations and thoughts that may provoke anxiety. When used in a home situation, he says this technique is also useful in lowering general anxiety levels and avoiding adrenaline spikes.

Coaching, counseling and listening, Hall works with Veterans and their individual musical skill levels. In the past, he has used the guitar, keyboards, song writing and even the ukulele as tools.

“I had to learn to play the ukulele right alongside one Veteran,” said Hall laughing at the memory.

Someone positive makes a world of difference

“Van helps us more than he thinks he does,” said Pope. “Coming to talk to Van, someone positive, it makes the world of difference. It’s nice being here and I look forward to these meetings.”

Vet Centers are community-based counseling centers providing a broad range of counseling, outreach and referral services, free-of-charge in a safe and confidential environment to eligible Veterans, active duty service members (including National Guard and Reserve) and their families.

Vet Center counselors and outreach staff, many of whom are Veterans, are experienced and prepared to discuss the tragedies of war, loss, grief and transition after trauma.

Services include but are not limited to:

Veterans in crisis, or friends and family concerned about one, can always connect with caring, qualified responders at VA’s Veterans Crisis Line: 1-800-273-8255, text 838255, or www.veteranscrisisline.net.