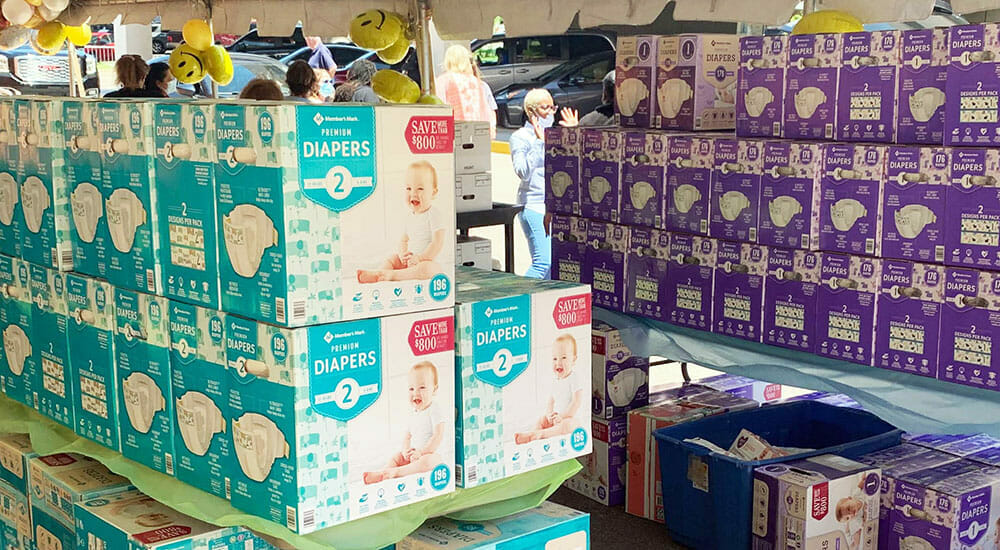 Oklahoma City VA held its fourth annual baby shower recently and there couldn’t have been a better day.

“We hold this event annually either the Friday before Mother’s Day or the Friday after,” said Melissa Overfield, chief of Center for Development and Civic Engagement. “Today, the weather was perfect to celebrate these new and expecting mothers.”

Initially, the baby shower was held indoors but due to COVID-19 restrictions the last two years, it has been held as a drive through event. New mothers drove through the medical center parking lot to receive baby shower gifts.

“We received donated items from the Benevolent Order of the Elks, The Daughters of the American Revolution, The Colonial Dames, The Salvation Army, American Legion Auxiliary, Soldier’s Angels, United Daughters of the Confederacy, and Veterans of Foreign War Auxiliary,” Overfield said. “We had so much community support for this event. I don’t want to leave anyone out. Thank you to them all.”

Baby shower gifts included multiple boxes of diapers, a backpack filled with baby essentials with a built-in changing mat, a box of non-perishable quick to prepare food, a bag of infant hygiene items. Each mother also chose a big item such as a Pack-and-Play, baby bouncer, highchair, or stroller. Radiology staff also made over 100 blankets for the new babies.

“I was surprised to get an invitation for the baby shower,” said Brittany Sharp-Browning, an Air Force Veteran. “Usually with VA, we think a lot of male care. It was really nice to have something done specially for women, especially pregnant Veterans. I felt very touched by that.”

“When they called me, I told them I already had my baby and they said I was still welcome to come,” Shelby Jenkins, Army Veteran, said. “It’s really nice to be thought of, so here I am.”

The Veterans who were invited to the drive-thru baby shower receive their care through the Women’s Clinic at the VA and surrounding community clinics. Maternity care is provided through the Community Care program.

“I think VA is getting better at adapting to women and women care, such as pregnancy,” Jenkins said. “They really have opened up more services for us such as breastfeeding stations for mothers and making us feel more welcome.”

“I came in. I was seen right away, got a referral to community care and was seen quickly,” Sharp-Browning said. “Quicker than if I had tried to go on my own outside VA, I’ve been very pleased with it. Anytime I’ve needed anything, whether it be my doctor or women’s health, I’ve always had what I needed.”