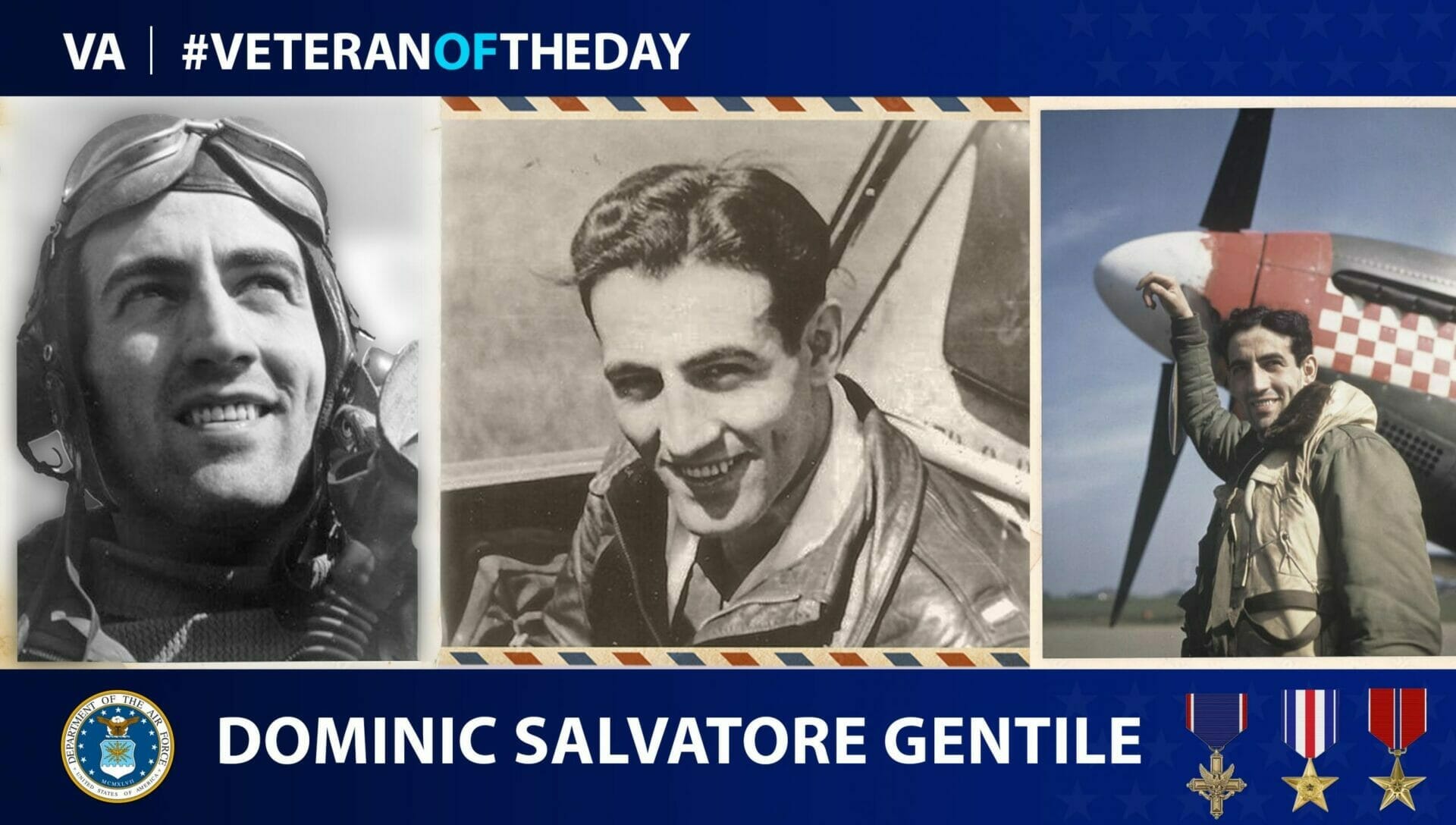 Dominic “Don” S. Gentile was born in December 1920 in Piqua, Ohio. Growing up, the young boy was captivated by aviation and regularly asked his father to take him to a nearby Weaver Aircraft Company factory to look at the aircraft. As a teenager, he took flying lessons and flew for the first time on his own. He bought his own aircraft for $300 but was cheated by the seller and never received it, so his father bought him an Aerosport biplane for $450. Gentile often flew the aircraft above the houses of Piqua, performing stunts and displaying his skills. One report suggested that he flew under a city bridge with “…less than three feet total clearance…”

After Germany invaded Poland in 1939, Gentile wanted to join the military. The Army Air Corps required two years of college experience to serve as a pilot. Instead, Gentile joined the Royal Canadian Air Force in the summer 1941 and later the Royal Air Force in Britain to fight. Upon arrival in Britain, he was assigned to the 133 Eagle Squadron, which was comprised of American volunteers. Flying a Supermarine Spitfire, he scored his first two victories on Aug. 1, 1942. A month later, his unit was transferred to the 336th Squadron in the Army Air Forces’ 4th Fighter Group where he was commissioned a second lieutenant.

In January 1943, Gentile was promoted to first lieutenant. During this time, he flew a P-47 Thunderbolt, scoring 4.33 victories with the aircraft. After receiving a promotion to captain, he became a flight commander, trading in his Thunderbolt for a P-51 Mustang that he nicknamed the “Shangri-La.” With his wingman Capt. John Godfrey, Gentile dominated the skies of Europe in spring 1944. Gentile scored 15.5 victories between March 3 and April 8. On April 5, he broke Capt. Eddie Rickenbacker’s World War I record of 26 kills. The three victories scored three days later brought his record to 30. Gen. Dwight Eisenhower described him as a “one-man air force.”

After wrecking while performing stunts for photographers, Gentile was sent back to the United States to sell war bonds. He joined the Air Force as a captain in 1947 and was assigned as a test pilot and instructor at Wright Field in Dayton, Ohio. Later, he studied military sciences at the University of Maryland. On Jan. 28, 1951, he was testing a T-33 Shooting Star near Andrews Air Force Base in Maryland. The aircraft’s engine flamed out, and he and a passenger were killed in the crash.