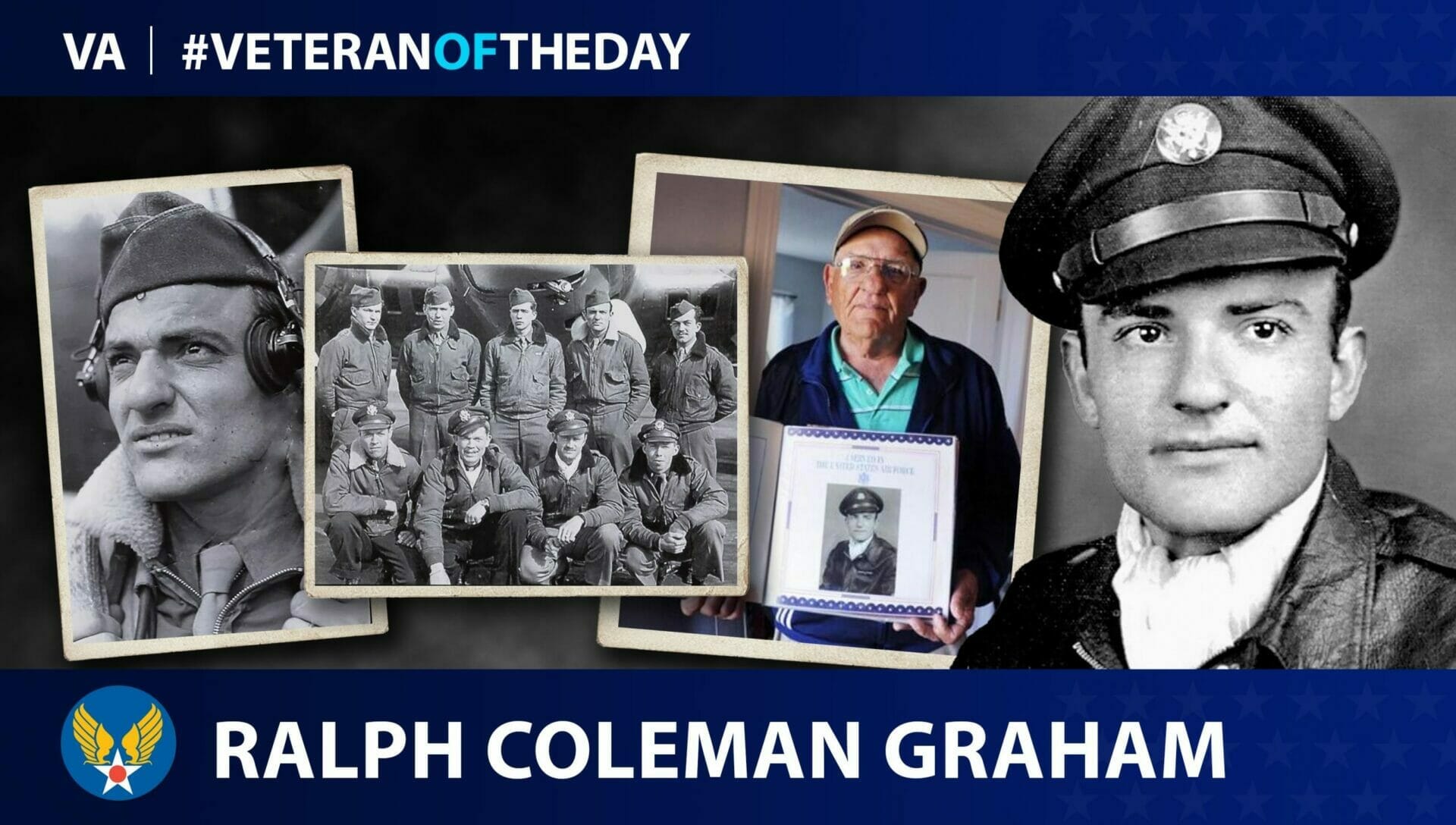 Ralph Coleman Graham grew up in Athens, Texas. At 18, he enlisted in the Army on Oct. 23, 1940. With tensions escalating abroad, he joined the military because he had been told that if he served one year, he would be discharged. Graham joked in an interview in 2018, “It didn’t work that way.”

Graham was assigned to the 2nd Engineer Battalion at Joint Base San Antonio in Texas. After serving as an engineer for 16 months, he transferred to the Army Air Forces. He went to pre-flight training in Coleman, Texas, and then attended basic flight training in Waco, Texas. During this training, however, Graham had a medical issue that caused him to black out while diving aircraft. He underwent surgery to fix this problem, but the procedure didn’t work.

Instead, Graham was sent to radio operators’ school, spending seven months at Scott Field in Illinois. Then, he went to gunnery school in Arizona. After training on B-17s in El Paso, Texas, Graham transferred to Lincoln, Nebraska, to be assigned to a crew. His unit made its way across the Atlantic, arriving in Britain in June 1944, where Graham was stationed in Lavenham. He joined the 836th Bomb Squadron, 487th Bomb Group, 8th Air Force. In November 1944, Graham went on his first bombing mission.

During the Battle of the Bulge, Graham’s unit waited for the weather to improve to allow for bombing raids. On Dec. 24, 1944, the dense fog that had hindered the Allies lifted, and Graham’s unit sprang into action. On the runway, however, Graham’s crew discovered an electrical failure on their aircraft and the crew was forced to switch aircraft and move their equipment. This process took 12 minutes, leaving Graham’s crew 40 miles behind the rest of their squadron. Graham’s crew joined a new squadron for the mission.

Meanwhile, Graham’s original squadron, which was now comprised of 12 bombers, was intercepted by 60 Messerschmitt Bf 109 German fighter aircraft. Eight of the bombers were downed and 34 airmen were killed, including Graham’s squadron leader, Gen. Frank Castle, the only person in the squadron aware that Graham’s aircraft had an electrical failure and, as a result, Graham’s crew was believed to be missing or dead since they did not return with the rest of their original squadron. Despite Graham’s crew returning, Graham’s aircraft was still reported as being downed during the battle.

Graham flew 33 missions during World War II. He left the Army Air Forces in 1945 at the rank of technical sergeant. Back home, got married, and he and his wife started Graham Insurance. In 2020, Graham wrote a book entitled, “12 Minutes: The Untold Story of the Ghost Plane at The Battle of the Bulge.” This book reviews the events of Dec. 24, 1945, and serves as “…an examination of God’s guiding hand in the affairs of man…” Graham currently resides in Speegleville, Texas.

Nominate a Veteran for Veteran Of The Day