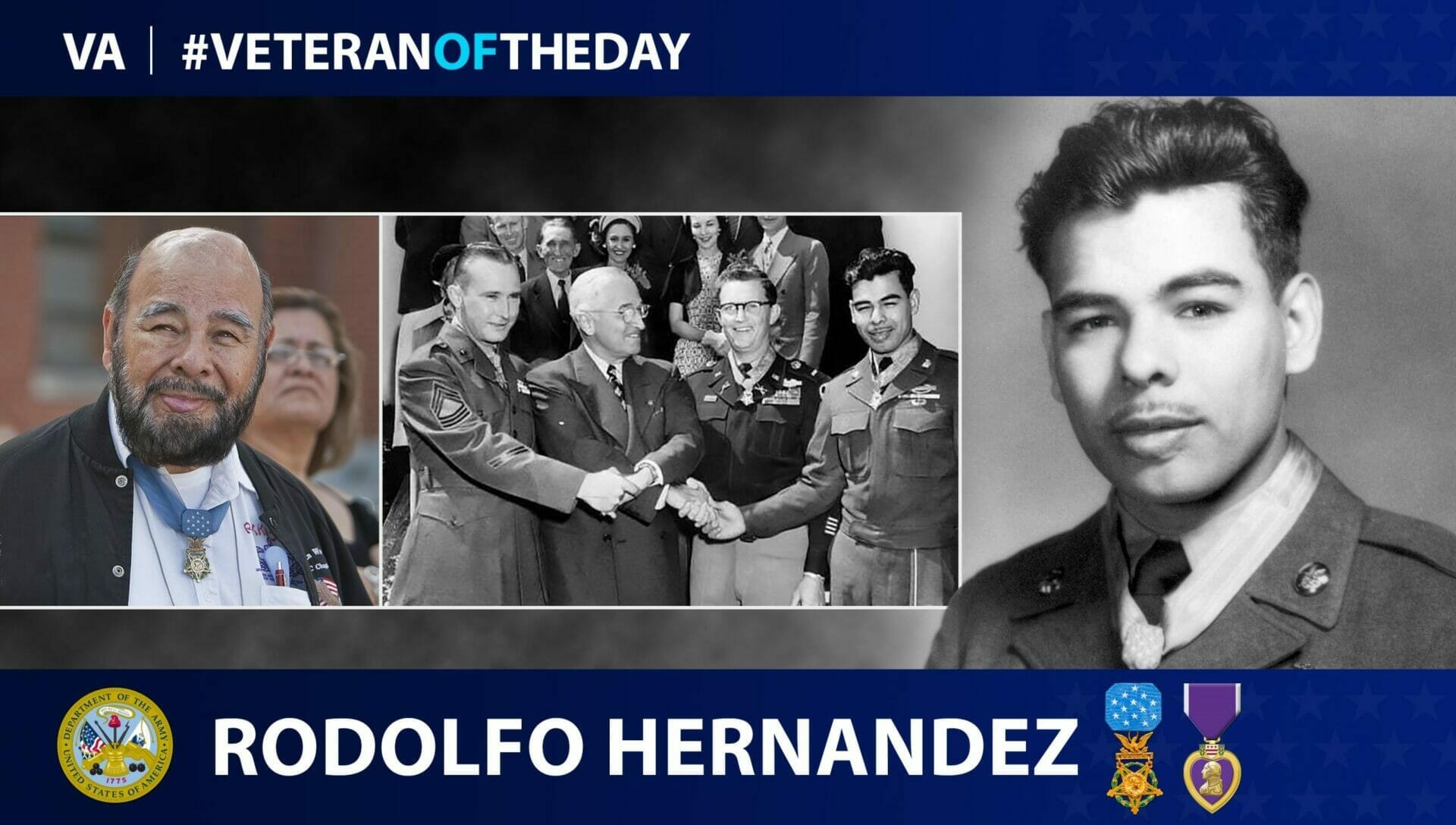 Army Veteran Rodolfo Hernández is today’s Veteran of the Day.

Rodolfo Pérez Hernández was born in April 1931 in California. His parents were immigrants from Mexico, and Hernández left school at a young age to aid in picking crops to help support his family, which included a brother and two sisters. He enlisted in the Army in 1948 at age 17 to further provide for his family. After basic training, he was assigned to Company C, 2nd Battalion of the 187th Airborne Regimental Combat Team and eventually deployed to Korea.

In May 1951, Hernández and his platoon were defending a position code named “Hill 420” near Wontong-Ni, Korea. The enemy force outnumbered them, and they attacked with artillery, mortar and machine gunfire. The platoon took heavy casualties and soon ran low on ammunition. Hernández himself received a head wound from enemy artillery fire, and his rifle had become unusable due to a ruptured cartridge. Hernández exited his foxhole armed with several grenades, his inoperable rifle and a bayonet, and charged at the enemy position. With the bayonet, he killed six enemy soldiers and halted the enemy attack, allowing the rest of his platoon to rally and counterattack. Hernández was knocked unconscious because of several wounds caused by shrapnel, bayonets and bullets.

Hernández was initially thought to be deceased by his comrades before regaining consciousness. He was rushed to a hospital and was found to have part of his skull lost, resulting in the right side of his body becoming paralyzed. A bayonet wound had also severely damaged his jaw. Hernández had to relearn to walk and talk because of his injuries, and he had to learn to write with his left hand because of his paralyzed right side. President Harry S. Truman presented the Medal of Honor to Hernández at the White House on April 12, 1952. He was just days away from turning 21.

After returning from Korea, Hernández studied at Fresno City College in California, working toward a degree in business administration. He eventually married, and he and his wife had three children. For much of his life, Hernández worked as a counselor at VA (then known as the Veterans Administration) in Los Angeles, helping his fellow Veterans. He retired in 1979 and took up golf. Hernández died in December 2013 at the age of 82 and is buried at Sandhill State Veterans Cemetery in Spring Lake, North Carolina.