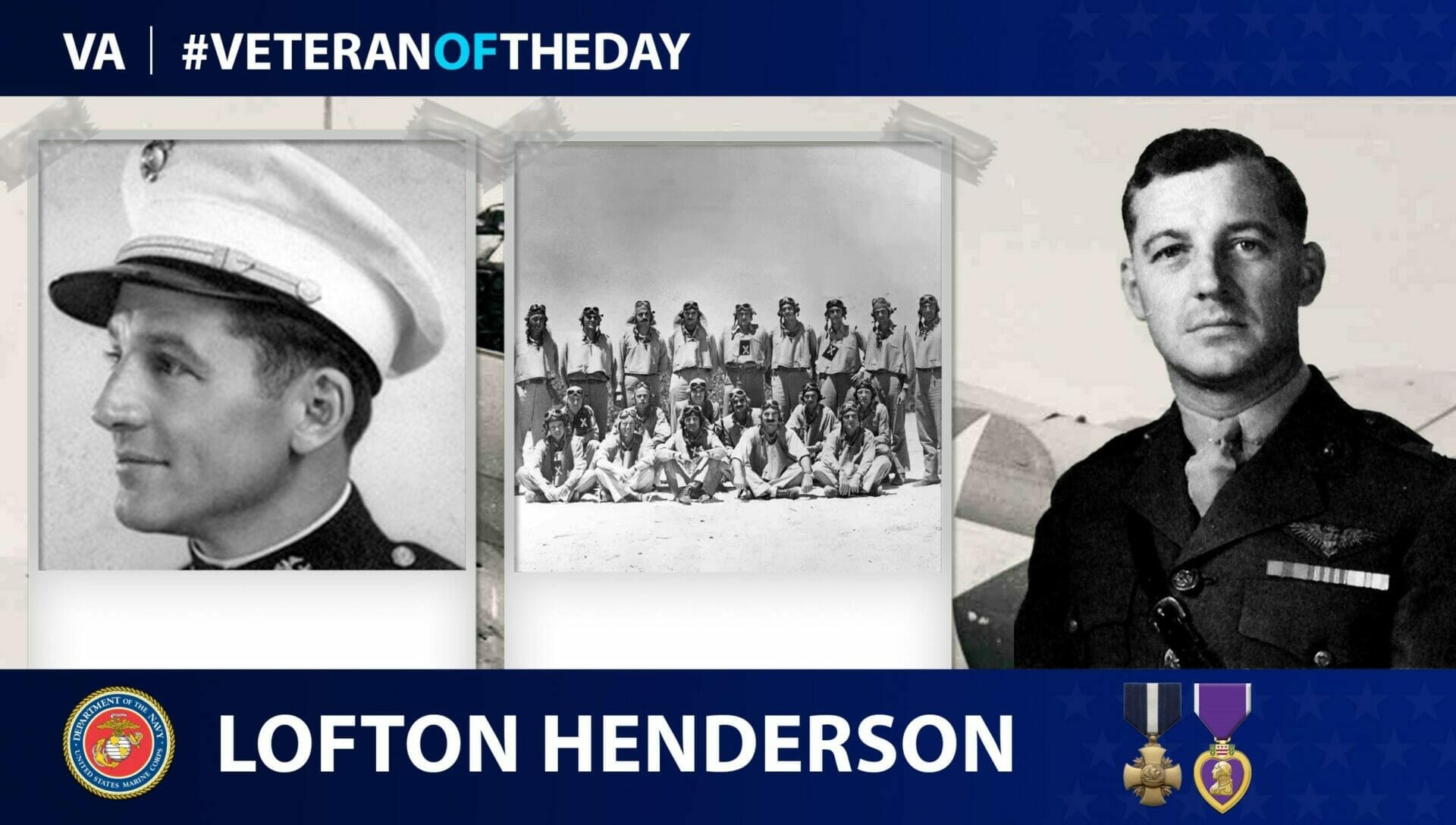 Lofton Henderson was born in May 1903 in Lorain, Ohio. After high school, he attended the U.S. Naval Academy in Annapolis, Maryland, and was commissioned as a second lieutenant in the Marine Corps after graduating in 1926. He entered basic flight training but broke his leg partway through and was reassigned to the Naval Torpedo Station in Newport, Rhode Island, to serve as a company officer.

In February 1927, Henderson reported to the Philadelphia Navy Yard for the basic class, completing it in July. While stationed at the Navy Yard in New York City, he served as a detachment officer, additionally taking on roles as a yard fire marshal and a defense legal counsel for court-martialed Marines. In October, he deployed to China with the Third Marine Brigade for temporary duty. Stationed in Tientsin, Henderson wanted to return to aviation; so, in spring 1928, he received a physical examination from a flight surgeon. After his physical, he received command of the 1st Platoon, 15th Machine Gun and Howitzer Company, 12th Regiment, 3rd Brigade. Henderson also served as a reconnaissance officer.

After a year in China, Henderson returned to the U.S. aboard USS Chaumont (AP-5) to report to Mather Air Force Base in San Francisco, California. For the next year, he underwent flight training and earned his pilot wings in September 1929. Subsequently, Henderson worked in several positions – including assistant gunnery officer, squadron officer and photographic officer. He was also stationed in Nicaragua as a part of the Aircraft Squadron 2nd Brigade. Henderson became a flight instructor in 1931 and worked at Naval Air Station Pensacola in Florida. After this, he served with various squadrons and earned a promotion to captain in 1936. Shortly after his promotion, he received the Nicaraguan Cross of Valor with Diploma.

After the U.S. entered World War II, Henderson was assigned to Marine Air Group 22 at Midway Island. There, he took command of Marine Scout Bombing Squadron 241 in April 1942 and began training his new squadron. They received new Douglas Dauntless SBD-2 dive bombers in May, which significantly improved their capabilities.

When the Battle of Midway began on June 4, 1942, Henderson and his men took off in their dive bombers to pursue the approaching Japanese force. After receiving coordinates, his squadron flew toward the Japanese aircraft carrier Hiryu to destroy it. However, they were quickly met by a larger contingent of enemy aircraft. During the ensuing fight, Henderson’s aircraft was hit several times, causing it to crash into the ocean along with his gunner, PFC Lee Walter Reininger. Both were declared missing in action and Henderson was officially declared dead in June 1943.

For his part in leading his men during the Battle of Midway, Henderson posthumously received a Navy Cross and a Purple Heart. Additionally, Henderson Airfield located at Guadalcanal, Solomon Islands, the Lofton Henderson Memorial Bridge back in his hometown and USS Henderson (DD-785) were named in his honor.