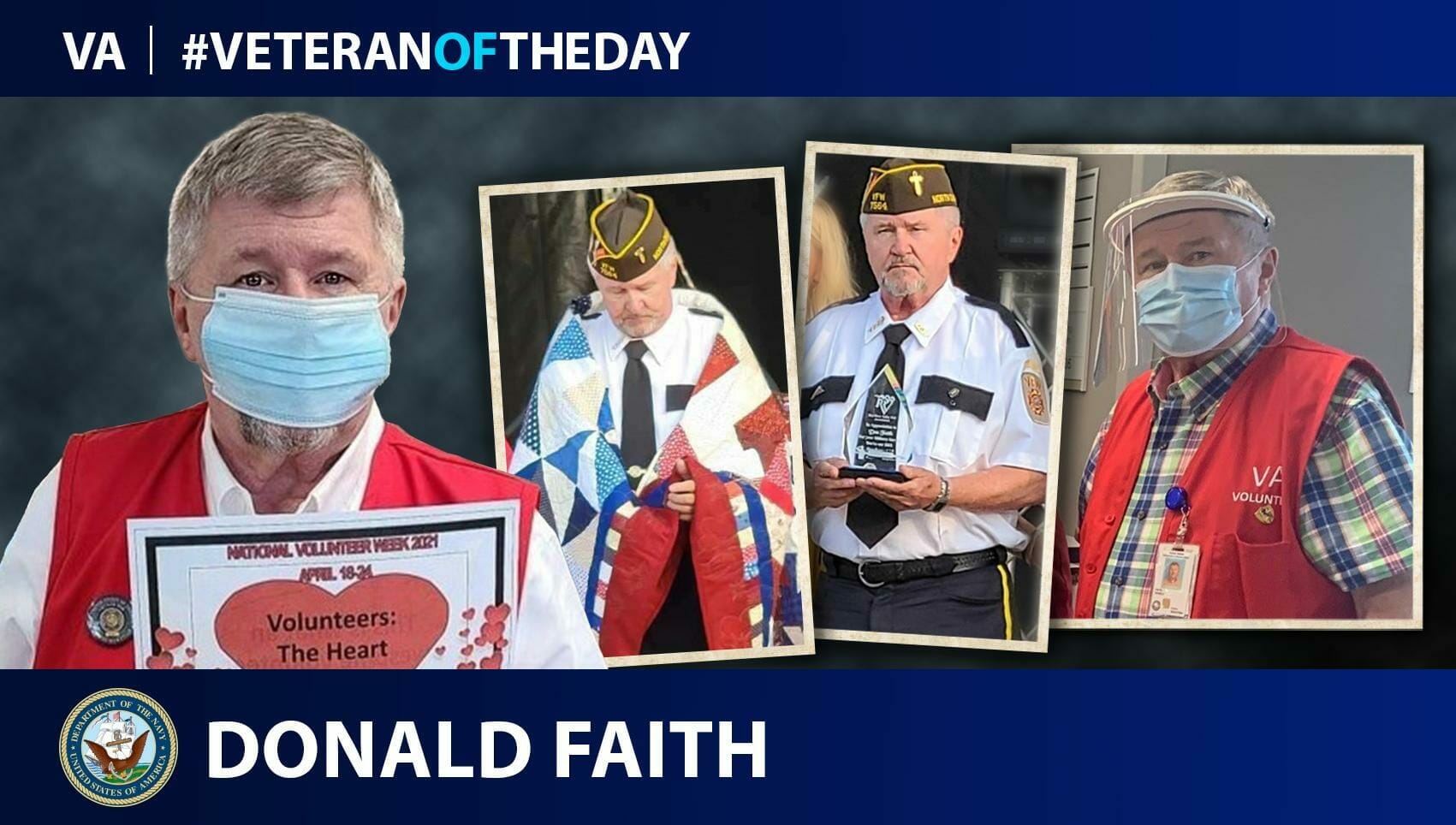 To celebrate Volunteer Week, today’s #VeteranOfTheDay is Navy Veteran Donald “Don” Faith, who served as an aviation electrician during the Vietnam War.

Over the past 17 years, Vietnam Veteran Donald “Don” Faith has donated over 3,000 hours toward various efforts at the Fargo VA in North Dakota. He began volunteering with the recreation program, playing bingo with Veterans, and assisted with front-door shuttle service in the parking lot. This role is especially important during North Dakota winters, as the wind chill temperature can plummet to –40°F degrees on any given day. Faith volunteered in this role for a few years, then moved on to the Emergency Department and then also the gastrointestinal clinic for year.

The Emergency Room (ER) was privileged to have Faith as its first volunteer. His duties included transporting Veterans within the medical facility, transporting lab specimens, cleaning exam rooms, answering phones and relaying calls to staff, among other clerical duties. His efforts lifted a huge burden from the ER staff, and have been instrumental in helping Veterans receive much-deserved care. The ER staff likes how he is relatable to Veterans, always asks the patient how they are doing, able to carry on a conversation or has a joke to tell, has a calm temperament, is flexible and very willing to help. For Faith, no task is too small or big.

Faith had served in this role for nearly eight years when COVID-19 arrived. Although the pandemic impacted volunteer opportunities in the ER, it didn’t prevent him from helping fellow Veterans. He shifted to an improvised “COVID-19 Red Coat Ambassador” position, a crucial role on many levels. Every week, he entered the facility with pride and a smile, although at personal risk. He assisted VA staff with patient escorts, delivered lab specimens, enforced social distancing, ensured sanitation, and kept traffic throughout the building to a minimum. His assistance helped maintain a degree of normalcy for Veterans in a world of unknowns. He continues to serve in this role eight hours per week, and is looking forward to volunteer opportunities to return to the ER, especially since the ER nurse manager has requested him by name.

When asked why he volunteers, Faith’s answer was simple. As a Navy Veteran himself, having served during the Vietnam War, he wants to give back to fellow Veterans. He credits his Navy experiences as having helped mold him into the man that he is today. After he retired from his civilian job, volunteering was a way to get out of the house, but it has evolved into so much more. He enjoys sharing stories with the Veterans of the Fargo VA and the friendship of fellow VA volunteers and staff. He was the recipient of a Quilt of Valor last summer and is Pup Tent #8 Cootie of the Year. He is also involved with the local VFW and has delivered Meals on Wheels for four years.