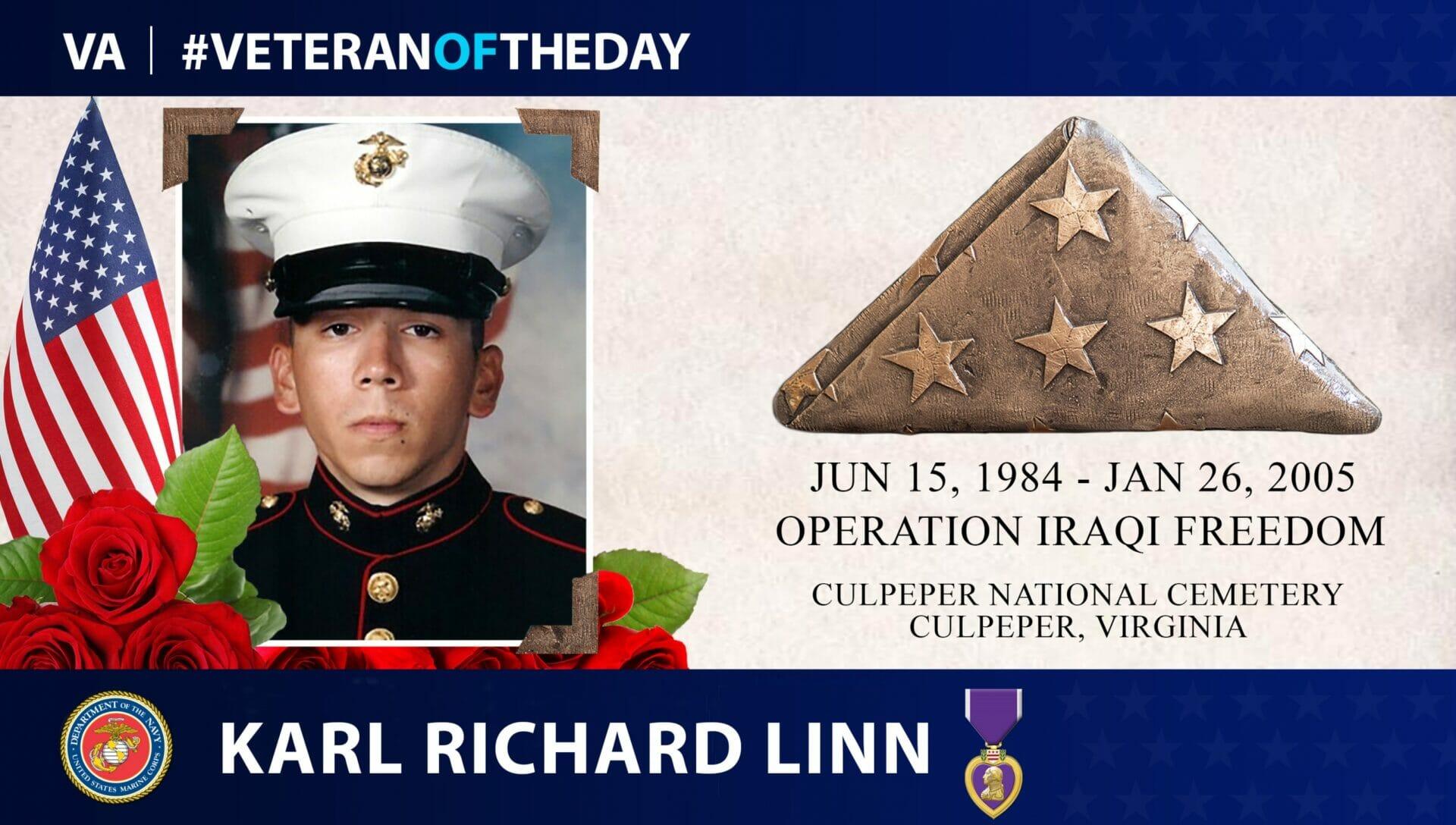 Karl Linn was born in June 1984 and grew up in Midlothian, Virginia. As a child, he had a strong interest in science, which also fostered an interest in robotics. Linn attended James River High School where he was a co-founder of the school’s For Inspiration and Recognition of Science and Technology (FIRST) robotics team.

On Sept. 11, 2001, like many other Americans, Linn watched the events of 9/11 unfold during the school day. Afterward, he decided he wanted to join the Marine Corps after graduating high school. He entered the Marine Corps delayed entry program as a reservist in June 2002. He also attended Virginia Commonwealth University (VCU) to pursue a degree in mechanical engineering. Linn was awarded the Alcoa Foundation Community Scholarship to attend VCU. He completed boot camp at Parris Island, South Carolina, in 2003, and his military occupational specialties and combat training in 2004.

Right before his third year at VCU, Linn learned he was to deploy to Iraq as a part of Operation Iraqi Freedom. In Iraq, he served in Charlie Company, 4th Combat Engineer Battalion, 4th Marine Division. At first, he was stationed in the northern regions of Iraq but was transferred to Haditha Dam in the Anbar Province a month later. Serving as a combat engineer, Linn was responsible for locating and destroying enemy weapon caches. Since the enemy frequently used Russian weapons, Linn quickly adapted to his role thanks to his existing knowledge of Russian weaponry.

On Jan. 26, 2005, Linn took part in a mission dealing with enemy insurgents near a mosque, but the unit found nothing when they arrived at the location and decided to leave. However, as the unit was leaving, they were ambushed by a contingent of enemy forces who fired at the Marines pinned on the road below them. During the fight, an enemy rocket-propelled grenade exploded near the Marines, severely injuring Linn and Jonathan Bowling. Both later died from these injuries.

During his service, Linn earned the rank of lance corporal. The Engineering West Hall at VCU also features a tribute to him, and the VCU College of Engineering awards two First Robotics Scholarships, one of which is named the Karl Linn Memorial Scholarship.

Linn is buried at Culpeper National Cemetery in Culpeper, Virginia.

To post a tribute this Memorial Day for Karl Linn please visit the Veterans Legacy Memorial.